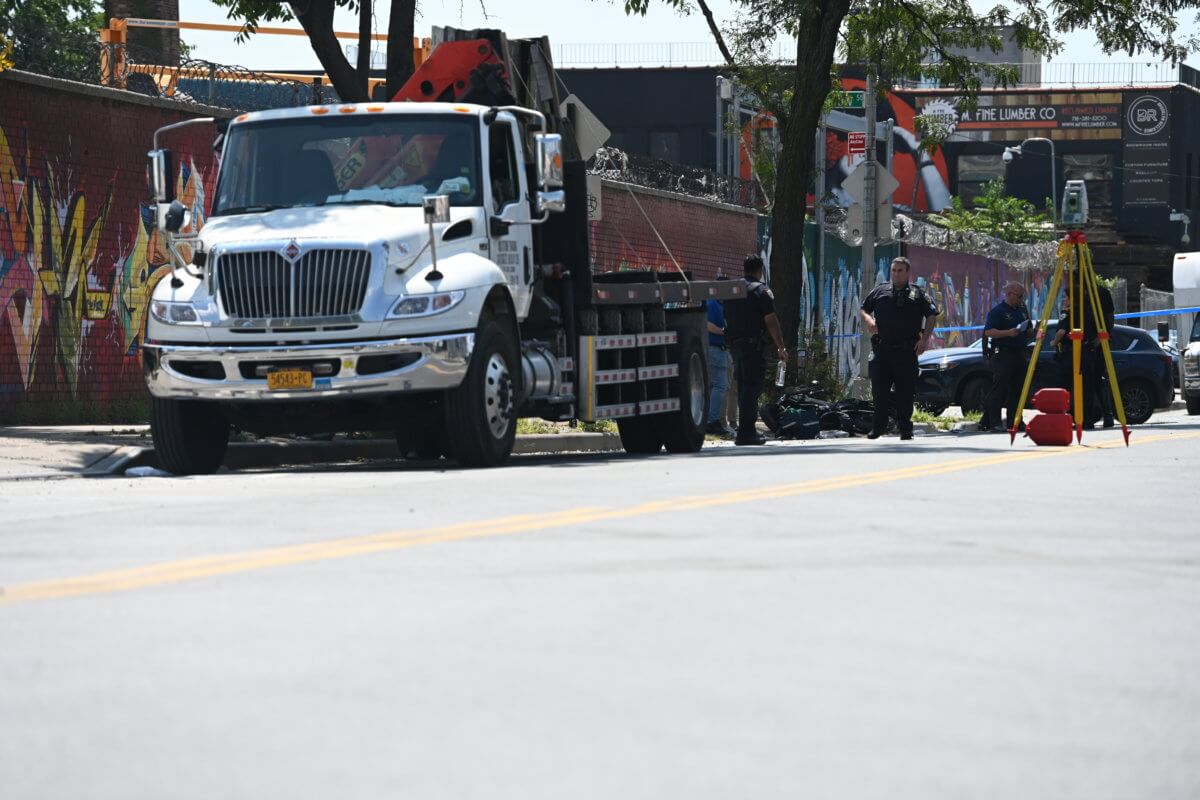 A truck driver fatally struck a delivery worker on a motorcycle on Morgan Avenue in East Williamsburg, Brooklyn, on Aug. 4.
Photo by Lloyd Mitchell

A truck driver fatally struck a delivery worker on a scooter on a dangerous roadway in a Brooklyn crash Thursday morning.

The 30-year-old man was heading north on a motorcycle along Morgan Avenue in East Williamsburg when a man driving a flatbed truck made a left turn off of Meadow Street and collided with the two-wheeler around 9:30 a.m. on Aug. 4, according to police.

Paramedics rushed the victim to Elmhurst Hospital where he was pronounced dead.

Police identified the victim as Daniel Vidal of Jefferson Avenue in Bedford-Stuyvesant.

His bike, delivery bag, and helmet were scattered in the street as NYPD investigated the crash.

The 50-year-old operator of the heavy hauler stayed on the scene, but police don’t suspect any criminality in the case, according to an NYPD spokesperson.

The license plate of the truck has six prior parking violations between 2017-2021, mostly in Brooklyn, according to state records collected by How’s My Driving NY.

Friends and fellow delivery workers mourned the death of Vidal, hugging and in tears next to scene that was cordoned off by cops Thursday morning.

Vidal was known locally as Dani, according to Gustavo Ajche, a founder of Los Deliveristas Unidos, a collective that advocates for food delivery app workers.

The two-way Morgan Avenue corridor running through the industrial neighborhood has a history of lethal crashes with trucks.

Another flatbed truck driver hit and killed 30-year-old Canadian artist Mathieu Lefevre who was riding a bike just three blocks away at the intersection of Meserole Street in 2011.

Morgan Avenue has a pair of bike lanes but they are unprotected from vehicle traffic, with just painted markings bordering the car lanes.

There have been a staggering 126 crashes on six blocks of the avenue between Meserole Street and Grand Street, injuring 158 people since 2011, according to city stats collected by Crash Mapper.