As Trump returns to the road, some Democrats want to bust Biden out of his basement 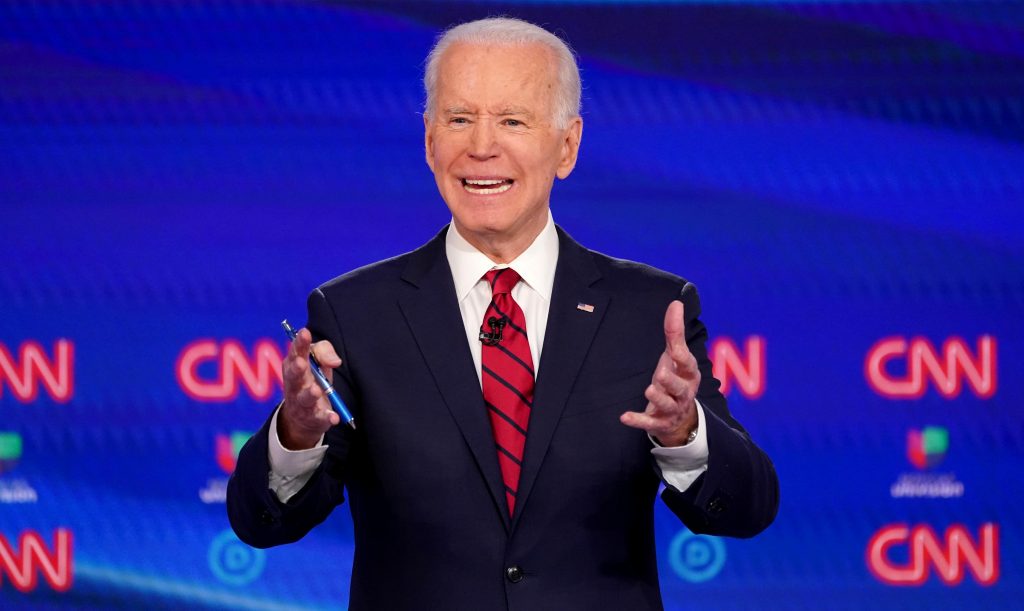 While President Donald Trump traveled to the battleground state of Arizona this week, his Democratic opponent for the White House, Joe Biden, campaigned from his basement as he has done throughout the coronavirus pandemic.

Those optics have some Democrats increasingly concerned.

The freeze on in-person campaigning during the outbreak has had an upside for Biden, giving the former vice president more time to court donors and shielding him from on-the-trail gaffes.

But the coronavirus lockdown also has deprived Biden of chances to showcase what allies see as his major asset contrasting with Republican Trump in a time of crisis: his empathetic personality.

“I personally would like to see him out more because he’s in his element when he’s meeting people,” said Tom Sacks-Wilner, a fundraiser for Biden who is on the campaign’s finance committee.

With Biden badly overshadowed by Trump and a few national opinion polls showing his lead ahead of the Nov. 3 election slipping, some Democratic operatives are urging the Biden campaign to boost his profile, worried the broadcasts from his basement in Delaware are falling short.

Onetime campaign advisers to former President Barack Obama penned two op-eds this week calling on Biden to raise the tempo of his campaign through more robust digital operations and help from celebrities, former rivals and Democratic governors at the forefront of the pandemic response.

Several allies also are encouraging Biden’s team to consider visits such as to essential workers, if those could be done safely and in line with public health guidance.

“The Biden campaign is going to have to think about ways in which they can drive the news every day, and that is a challenge during the crisis,” said Joel Benenson, a pollster who worked for Obama and 2016 Democratic nominee Hillary Clinton. “The president has the bully pulpit.”

Biden, a classic retail politician whose social media following pales in comparison with Trump, himself has expressed frustration with the limitations of communicating with voters remotely.

At the same time, he has routinely bashed Trump’s push to reopen the U.S. economy more quickly despite the concerns of public health experts who fear a second wave of coronavirus cases if social distancing is relaxed too soon.

Though his team wants to campaign in person as soon as doing so is safe, no imminent public appearances are planned.

“The health and safety of our supporters, staff and the American people is our top priority, and our decision-making on how to campaign will be guided by public health experts with that in mind,” said Biden campaign spokesman TJ Ducklo.

While Trump’s stop in Arizona on Tuesday was not an official campaign trip, it demonstrated the advantages the presidency affords him.

As he pledged more than $600 million in coronavirus response aid to two Native American nations, standing with tribal leaders in person, Biden’s campaign sent a message on Facebook pledging to “stand with” native people in their fight against sex trafficking.

Trump was heavily criticized, however, for not wearing a mask while greeting workers in Phoenix at a mask-making facility, where a sign noted masks were required. A video of his appearance at the factory, as the song “Live and Let Die” played in the background, went viral.

Trump’s overall popularity has been mostly flat throughout the crisis, with the number of adults who approve of him wavering between 40% and 45% from March to May, according to Reuters/Ipsos national opinion polls.

Despite mounting economic damage that saw 20.5 million Americans lose jobs in April, most Americans have consistently said in polls they want to maintain social distancing to protect themselves from the virus.

“Trump has decided to go all-in, risk the death,” said John Morgan, a Florida trial lawyer who has raised money for Biden.

Biden, he said, has to be the “candidate of sanity and security.”

Trump campaign spokesman Tim Murtaugh said Trump has a duty to protect both the safety of Americans and the economy.

“We have to get moving again when and where it’s safe, because long-term economic inactivity comes with its own set of problems,” Murtaugh said.

Biden advisers said the more critical months for the campaign would be in the fall, when more voters will be paying attention than they are during the pandemic that has infected more than 1.25 million in the United States and killed over 76,000 people.

Meantime, Biden has made near daily appearances virtually, for media interviews, fundraisers, late-night comedy shows and Instagram events with famous people such as soccer star Megan Rapinoe. He has begun to film on the property outside his home, providing a more varied set of backdrops.

On Thursday, Biden was interviewed by news outlets in battleground state Florida, held an event on Zoom with black leaders in Jacksonville and hosted a virtual rally for Tampa voters.

His campaign also again denied an allegation by former Senate staff assistant Tara Reade, who in March accused Biden of sexually assaulting her in 1993 and on Thursday said he should drop out of the White House race.

With no travel schedule, Biden has spent more time calling donors, aiming to close the approximately $180 million gap he had with the Trump campaign at the end of March.

Biden held several fundraisers since mid-April that took in more than $1 million each.

“There’s a huge cash deficit to make up right now,” said an adviser for a former rival Democratic presidential campaign. “If Joe Biden has the luxury of sitting in a room and calling 100 rich people a day, do it.”

His campaign recently tweeted a video in which Biden’s eyes well up with tears as he speaks on a call with an intensive care nurse who describes herself as “tired” and “scared every day.”

Jim Margolis, a Democratic Party ad maker, said there is only so much Biden can do from home while Trump gets non-stop coverage. But with scientifically questionable medical advice and frequent misstatements, Trump’s unfiltered media appearances have done more harm than good, Margolis said.

“At the end of the day, this campaign should fundamentally be about Donald Trump,” Margolis said. “It needs to be a referendum on Donald Trump.”