Another slow start dooms Jets in London loss to Falcons 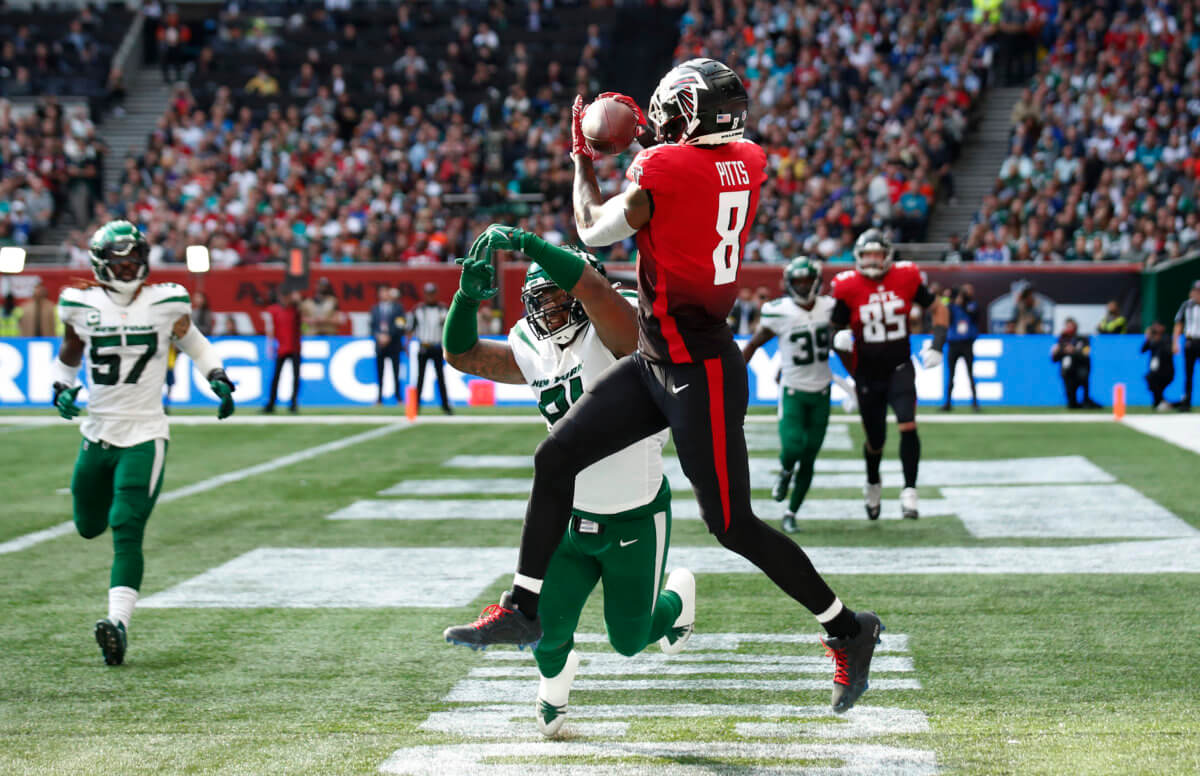 It appears that Falcons can make a trans-Atlantic trip more effectively than Jets.

Another horrendous first quarter proved to be the major difference in the New York Jets’ 27-20 loss to the Atlanta Falcons on Sunday morning in London, falling into a three-possession first-half hole that they ultimately could not get out of.

The Jets yielded 10 points on their first two possessions of the day as the Falcons dominated the first quarter, outgaining New York 134-16. It continues the trend of miserable first quarters for the Jets’ offense, who have gained just 79 yards over their first five games.

The Jets had no answer for Pitts on Sunday, who posted nine receptions for 119 yards and that score.

It wasn’t far off from the output of Jets rookie quarterback Zach Wilson passed for on Sunday as there was a noticeable regression in his game compared to the heroics he displayed last week against the Tennessee Titans. The 22-year-old completed just 19-of-32 attempts for 192 yards and an interception.

His issues paired with the blasé play-calling of a horizontal aerial attack from offensive coordinator Mike LaFleur forced the Jets to play a frantic game of catch-up, which they almost pulled off by getting within three at 20-17 — but a defense that had forced two turnovers against Atlanta broke when it mattered most, allowing a late touchdown to end New York’s chances.

Wilson’s opposite number in the veteran Ryan put together a vintage performance against the Jets, throwing for 342 yards and a pair of touchdowns.

He and the Falcons kept pouring it on with the opening possession of the second quarter as they went 77 yards in just under four minutes to make it 17-0 when Ryan hooked up with a wide-open Hayden Hurst on a short slant that allowed him to walk in for a 17-yard score.

Upon getting the ball back, the Jets immediately gave it away when Wilson was intercepted by Jaylinn Hawkins, giving Atlanta possession deep in Jets territory — but the New York defense came up big to stop the bleeding.

On a 17-yard completion to Hurst down the right sideline, Jets linebacker CJ Mosley stripped the ball from the receiver and it was recovered by Michael Carter II.

The turnover wrenched some momentum toward the Jets as the offense pieced together a 16-play, 74-yard drive. But it stalled on the Falcons’ 13-yard-line to end in a field goal with 2:18 to go in the first half. Their deficit rose back up to 17 at the break though as Younghoe Koo nailed a 52-yard field goal as time expired.

Tevin Coleman provided a spark for the Jets on the opening kick-off of the third quarter, returning it 65 yards to the Falcons’ 29-yard-line. Of the seven ensuing plays, the Jets ran the ball six times, finished off by a Ty Johnson one-yard touchdown rush. Matt Ammendola would miss the extra point, though, as the Jets’ deficit stood at 11.

While the Jets couldn’t take advantage of another turnover that stopped a Falcons drive knocking on the door of the red zone, they drew within three with 6:55 remaining in the fourth quarter when Michael Carter cruised up the middle from two yards out before a successful two-point conversion.

Rather than performing a dink-and-dump attack, LaFleur dialed up some more vertical chances for Wilson — allowing the rookie to show what he can do.

He hit Keelan Cole for a 23-yard reception before a vital 27-yard connection to the controversial Denzel Mims on a 1st-&-20. A deep attempt to Elijah Moore coaxed a pass-interference penalty that gifted the Jets 41 yards, bringing the ball down to the 2-yard-line to set up Carter’s score.

The Falcons immediately punched back when Ryan hit Pitts for a 39-yard reception to get deep into Jets territory. It was the big play of a 75-yard drive that ended with the Falcons re-stretching their lead to 10 with 2:19 to go after Davis was pushed to paydirt from three yards out.