Note: if you purchase something through one of our affiliate links, Schneps Media may earn a commission.
Justin Bales Posted on September 25, 2022 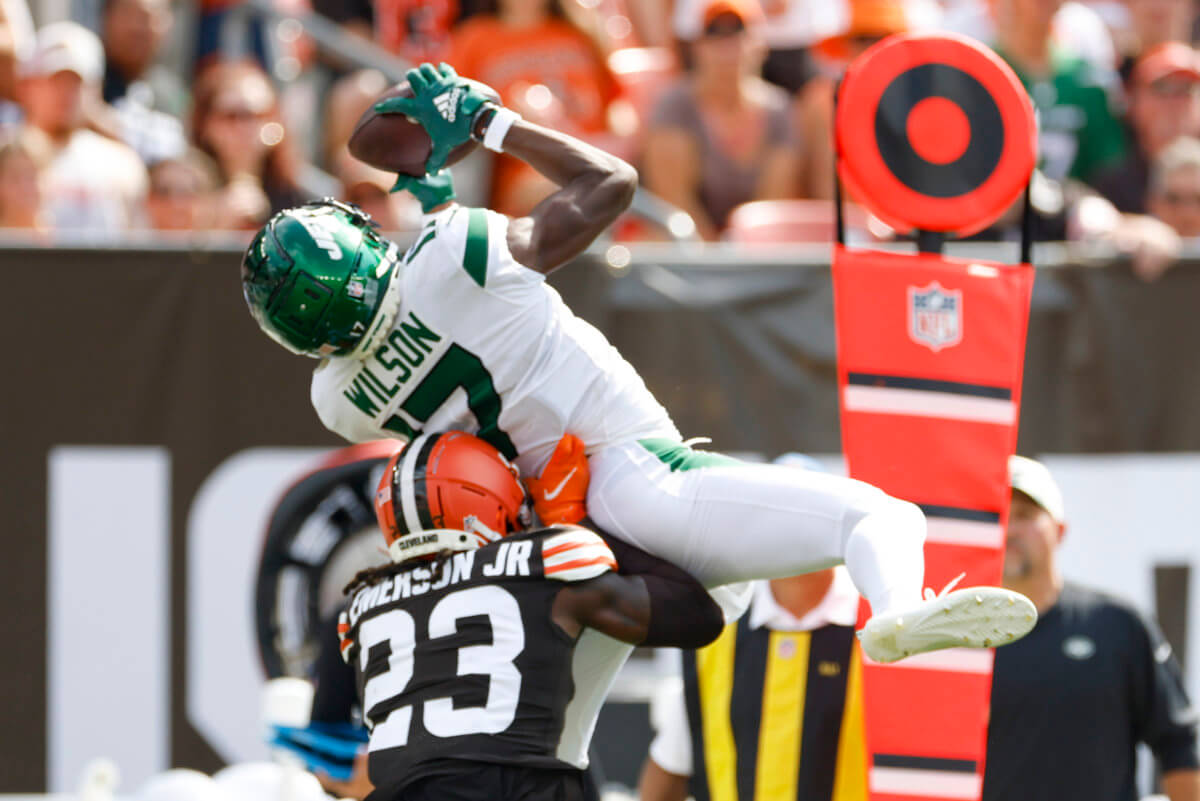 It’s been a wild NFL season through only two weeks thus far.

We’ve seen several massive leads overcome in the fourth quarter, and ultimately, there are only six undefeated teams left at the moment with seven winless teams (Houston and Indianapolis have ties). It doesn’t look like one team is going to completely run away with the season, although there are a few teams in tiers higher than the rest.

We have plenty of elite matchups for Week 3, and below are my top NFL best bets for the week!

Cincinnati was always going to take a step back offensively because of their elite efficiency last season. They’ve seemingly overcorrected at this point, though. The Bengals currently rank 28th in the NFL in points per play (0.230) through two games.

On the other side, New York’s seen mixed results offensively with Joe Flacco under center. They posted only 9 points against the Baltimore Ravens, although they had a touchdown called back late in that game. They followed it up with 31 points against the Cleveland Browns last week.

This play has more to do with the defenses than the offenses, though. The Bengals rank 21st in the NFL in points allowed per play (0.358) this season. They’ve struggled, which is shocking since they’ve faced off against Mitchell Trubisky and Cooper Rush.

Joe Flacco isn’t a great quarterback by any stretch of the imagination. He’s surrounded by great weapons, though. Breece Hall and Michael Carter have both flashed early this season. Garrett Wilson’s proven to be NFL-ready, while Corey Davis and Elijah Moore are causing issues for opposing defenses.

The Jets aren’t an offense that is going to consistently find success, but they should flash at times in this matchup.

Joe Burrow and company have struggled to produce throughout the season. They haven’t been able to get the chunk plays that they were able to last season. Burrow also threw four interceptions against the Pittsburgh Steelers.

It’s only a matter of time before this offense pops off for an elite game, though. The Jets are allowing 0.458 points per play this season, which ranks 27th in the NFL.

The Bengals should be able to run the ball throughout this game. Those runs will set up the big plays to Ja’Marr Chase and Tee Higgins on the outside. The Bengals are in dire need of a win after starting the season 0-2, and I’m expecting their offense to get the job done this week.

It’s 2022 and Jared Goff is leading one of the best offenses in the NFL. I can’t believe I typed out that sentence, but the NFL is a strange league. The Lions have posted 35 and 36 points in their two games this season. They rank fourth in the NFL in points per play (0.559) as well.

Detroit’s relied heavily on D’Andre Swift and Amon-Ra St. Brown this season. The Green Bay Packers and Philadelphia Eagles both dominated Minnesota on the ground in their opportunities. Swift and Jamaal Williams should find success on the ground, while Minnesota isn’t likely to have an answer for St. Brown in the slot.

The Vikings have flashed as a defense. They dominated Green Bay, who looked out of sync without several important players in their offense. They only gave up 24 points last week to the Eagles, although that game felt out of hand relatively early on.

I don’t believe the Vikings have a bad defense, but I also don’t believe that they feature one of the best defenses in the NFL. Instead, they’re likely closer to an average defense, and the Lions should be able to find plenty of offensive success for the third consecutive week.

Minnesota’s offense was expected to take a step forward with Kevin O’Connell coming in from the Sean McVay coaching tree. They looked great in the first half of the Green Bay game, but they’ve sputtered a bit since then.

Even though the Vikings haven’t been as explosive as many have expected at this point, we know they’re going to find success at some point. Justin Jefferson is one of the best receivers in the NFL with Adam Thielen still playing at a high level. Dalvin Cook and Alexander Mattison also make one of the best running back duos in the NFL.

We’ve seen Philadelphia and the Washington Commanders find elite offensive success against the Lions. They haven’t been able to stop some of the top receivers, and this is an elite spot for Jefferson. He should get back to the way he looked early in the game against the Packers.

The Lions are the more important team for this total. Their offense should find success against Minnesota’s defense, allowing them to score at a high rate for the third consecutive week. Their defense isn’t good enough to slow down all of the weapons the Vikings possess. We should see this game quickly turn into a shootout.

This game comes down to essentially one aspect of football. Which team has proven they can score this season? Atlanta.

The Falcons have had a tough start to the season, losing close games to the New Orleans Saints and Los Angeles Rams. They scored 26 and 27 points in those games. They’ve also lost to two solid teams by a total of 5 points.

The Seahawks haven’t proven that they can score at this point, although they’ve been in tough matchups against good defenses. They’ve totaled only 24 points against the Denver Broncos and San Francisco 49ers.

The Falcons are looking to run the ball throughout their games, and Cordarrelle Patterson’s looked outstanding thus far. The Seahawks have generally struggled to defend the run this season, giving an edge to the Atlanta offense. Once they get Patterson working, they have several options they can go off of, including running with Marcus Mariota or play-action to Kyle Pitts or Drake London.

Ultimately, I believe whichever team has the rushing edge should have the overall edge in this game. I’m giving that edge to Atlanta. Granted, the home-field advantage should be big in Seattle, but it generally isn’t as difficult to travel West as it is to travel East.

At +100 odds, I’m willing to grab the underdog here. Atlanta picks up their first win of the season in Week 3.

For more NFL coverage, like these best bets, make sure you visit amNY Sports