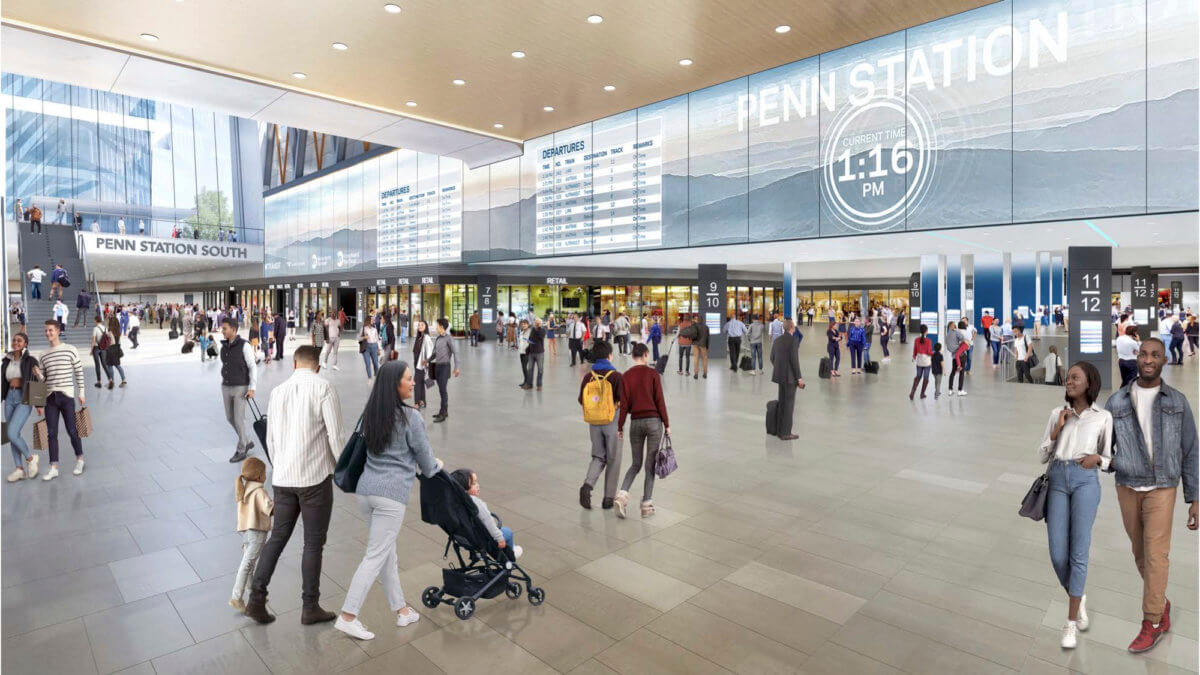 The MTA Board on Wednesday voted to approve hiring WSP, FXCollaborative, and British firm John McAslan and Partners for the job at a base contract of $58 million.

The latter firm is behind the overhaul of the King’s Cross Station in London, which would be a promising model for what New York is trying to do with the dark and cavernous Penn Station, said MTA Chairperson and CEO Janno Lieber at the agency’s Sept. 21 board meeting.

“That is probably the most significant precedent project for the renovation and reconstruction of existing Penn and we’re thrilled that that teamwork is part of this story,” Lieber said.

The companies will be tasked with coming up with a design for the renovation of the notoriously claustrophobic Manhattan transit hub into a light-filled and better-connected station based off of the Penn Station Master Plan, according to officials.

The proposal is to knock out part of the upper floor to create a single-level concourse and a mid-block train hall with a 450-foot skylight.

The MTA’s Construction and Development division will manage the project together with Amtrak and NJ Transit, both of whom use the busy station.

The contract is for $57.9 million over 12 months to come up with a preliminary design, but the agency may task the companies with add-on services as part of the renovation, which could raise the cost by tens of millions of dollars and extend the schedule to more than eight years.

The options range in additional cost from $3.7 million to $152.7 million, according to the approved contract.

Those add-ons include more design work for new connections from Penn to nearby subway stations along 34th Street, such as the Herald Square complex on 6th Avenue and Broadway, as well as the 7th and 8th Avenue lines, according to MTA’s C&D chief Jamie Torres-Springer.

If the extra tasks exceed $100 million currently budgeted in MTA’s five year capital plan for the work, agency officials will have to come back to the voting board for approval.

Hochul launched bidding for the design contract in June.

The governor pushed forward massive and controversial Penn Station project launched under her predecessor Andrew Cuomo, which will use payments from surrounding property developers to partially pay for the scheme along with a possible future expansion of the station to the south with new tracks.

The current renovation does not include any added train capacity.

The contract moves the Penn Station project ahead so that construction can begin in 2024.

MTA leaders want to work on the Penn upgrades when there’s less train traffic there, between the time Grand Central Madison opens to Long Island Rail Road riders at the end of this year, and when the agency brings Metro-North Railroad commuters into Penn Station via four new stations in the Bronx in 2027.

“We have to take advantage of this window of opportunity when ridership in Penn is significantly reduced,” said Lieber. “We want to be ready when that new customer pool — who by the way is used to Grand Central, a lot of those people are used to Grand Central, so you know how they’ll feel if they arrive in existing Penn.”

Lieber said it was also for the designers to figure out what kind of seating the new Penn Station should get.

Moynihan Train Hall, the first part of the new Penn Station complex which opened to Amtrak riders at the beginning of 2021, suffers from a severe lack of benches, leading to riders to sitting on the floors as they wait for their trains.

But Lieber wouldn’t say whether he thinks benches belong in a modern-day train hall.

“That’s an abstract question,” he told reporters in a press conference after the board meeting. “We’re in a different era and the key issue is circulation and what is good for the riders and people who use the station.”