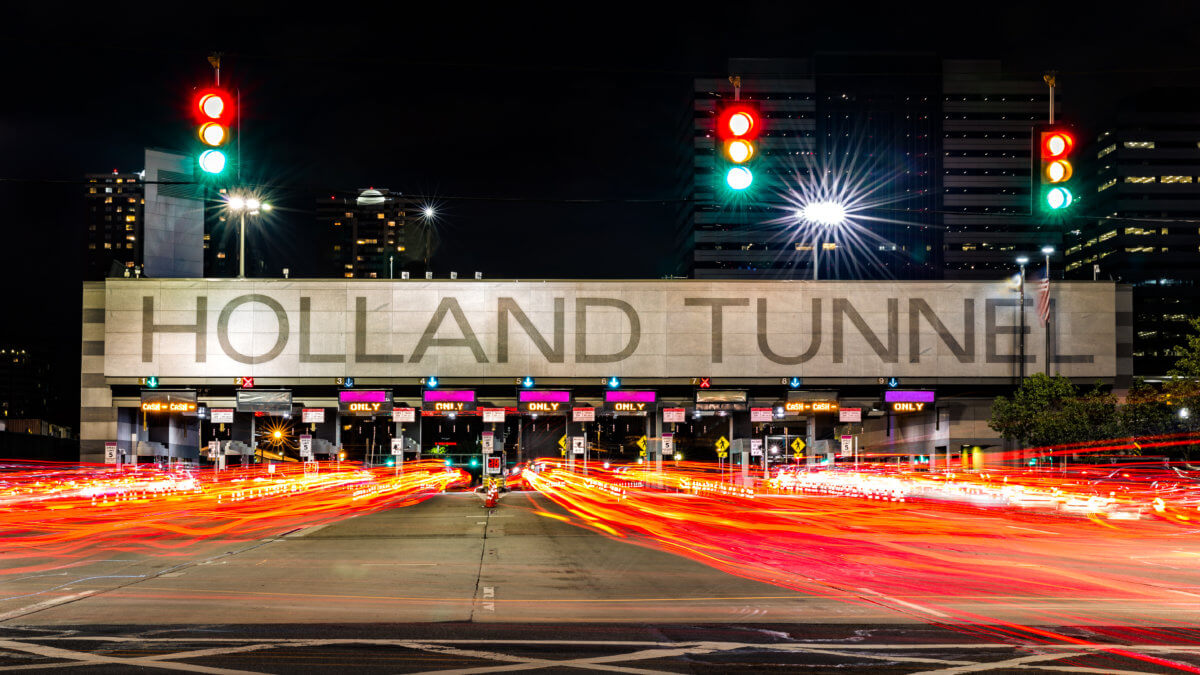 The New Jersey Turnpike Authority and the local branch of the E-ZPass tolling service published alarmist notices encouraging drivers to give their two cents to New York’s MTA as the agency collects feedback on recently-released details of what the fee could look like.

“The Central Business District (CBD) Tolling Program, which would impose a Congestion Pricing Fee in excess of $23 for entering Manhattan south of 59th Street, could significantly increase commuter costs, overburden our public transit systems, and cause congestion in North Jersey communities,” read a pop-up alert on the website of of the Turnpike Authority.

The Authority operates the New Jersey Turnpike and the Garden State Parkway, and is controlled by Governor Phil Murphy, who appoints most of the members of its board and picks its chairperson.

A near-identical update appeared on the New Jersey E-ZPass webpage — the only difference being that it started with “Dear Driver” — and the company apparently sent out texts to account holders warning them that the scheme would “increase cost and congestion” for area motorists.

The MTA also works with E-ZPass through its Bridges and Tunnels division.

On the company’s New York site, a notice on congestion pricing is more in line with the MTA’s own description of the program, noting its benefits of less traffic and better-funded mass transit.

The company’s New Jersey branch did not respond to requests for comment by press time.

A transportation advocate slammed the messages from across the Hudson River as misleading.

The notifications came as the MTA has started hosting a half dozen marathon virtual public hearings about the congestion fee, starting last Thursday through this Wednesday.

Ride-hail company Uber has also sent out an email to its customers asking them to urge MTA to exempt their rides from the toll, the Daily News reported.

Hundreds of people have given their take on the project, which aims to cut congestion in Manhattan’s busiest areas and use the revenue to fund upgrades to the MTA’s decaying mass transit infrastructure.

The toll could be anywhere from $9-$23 during peak travel periods to enter the zone, according to seven scenarios the MTA studied in a lengthy environmental assessment released on Aug. 10.

The tolling zone begins south of 61st Street — not 59th as the Jersey statements claim — and it excludes the West Side Highway and FDR Drive.

More exemptions and discounts lead to higher base tolls so the agency can still generate $1 billion in revenue it requires to fix its subways and buses.

Two scenarios would allow drivers coming from New Jersey via the tolled Holland and Lincoln tunnels to credit that charge ($13.75 during peak hours for E-ZPass holders, $11.75 off-peak) against the congestion fee, but the toll for others would rise to $23 and there would be fewer decreases in traffic on those routes, according to the assessment.

Transit officials estimate there could be slight traffic increases of less than 0.2% in northern New Jersey, mostly in Bergen and Middlesex counties, due to drivers rerouting to the George Washington Bridge uptown and the Outerbridge Crossing to Staten Island for through-trips avoiding the new toll.

A whopping 90% of pre-pandemic trips from New Jersey into the central business district during the morning rush were via transit, including buses, PATH trains, NJ Transit, and ferries, according to the study.

While the New Jersey statements warn of “overburdening our public transit systems,” trips to the congestion zone would only increase between 1.4-3.8% from across the river, the study claims.

When asked by reporters Monday whether the E-ZPass messages were New Jersey’s official position, Murphy said that transit across the Hudson wasn’t good enough to lure drivers out of their cars, and cast blame on others for delays of projects like the Gateway Tunnel rail renovations and the new Port Authority bus terminal.

“Thanks to the inaction by administrations that came before us… we’re not realistically in a position right now where you can easily take somebody off the road, convince them with new tunnels built or new bus terminals built, that their alternative is compelling,” Murphy said on Aug. 29.

“So maybe it’s a good idea, but it’s an idea whose time has not come,” he added.

Earlier this month, the governor said he and New Jerseyans “love the concept” of congestion pricing, but vowed to oppose any plan that charged the state’s drivers twice.

While the governor focused on previous administrations and other levels of government failing to better the area’s mass transit, he has lately been lambasted by local pols in his state for backing a $5 billion plan to widen the Turnpike near the Holland Tunnel.

Mass transit riders in New York have already suffered from the roaring return of interstate car travel, as passenger vehicle volumes have come roaring back to pre-COVID levels and mass transit remains well below 2019 rates.

MTA had to routinely cut short one of its bus routes near the Holland Tunnel’s Downtown Manhattan entrance due to gridlock traffic last year.

Murphy doesn’t have an official role in the project, but he recently threatened to obstruct the bi-state Port Authority’s routine procedures — whose control is split between him and Governor Kathy Hochul — if the Empire State moves ahead without a better deal for Jersey drivers.

“If we have to we’ve got options, which I don’t want to use but we can use through the Port Authority,” he told CBS News. “It’s a bi-state authority, all the minutes have to be approved by both governors — very simple.”

A six-member panel known as the Traffic Mobility Review Board will come up with a final toll for the MTA to vote on, with five appointees by Hochul and one from Mayor Eric Adams.

Update (Monday, Aug. 29, 4:53 p.m.): This story has been updated to include comments New Jersey Governor Phil Murphy made Monday.