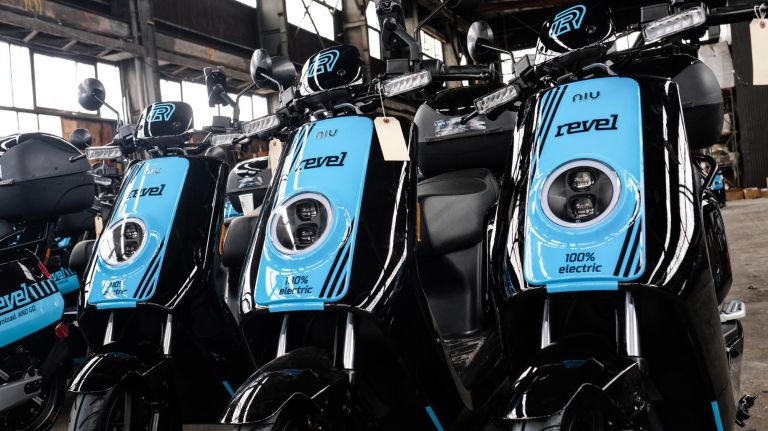 Moped-sharing company Revel announced Wednesday that it will enlarge its fleet from 68 to 1,000 electric scooters in Brooklyn and Queens. Photo Credit: Vincent Barone

After a number of deaths in New York City and Revel backing out of serving the five boroughs until further notice, Councilman Ydanis Rodriguez is looking the better regulate the scooter and moped shares in the future.

Introducing legislation in the City Council at the Aug. 27 stated meeting, Rodriguez hopes that the onus will be on the city Department of Transportation, regardless of the legality at the state level, to regulate companies operating shared moped or scooters within city limits.

Announcing the new legislation at 96 Wadsworth Terrace in Washington Heights where one of three Revel users was killed within a ten day period in July, Rodriquez said he supports the use of mopeds considering their status a primary form of transportation for many people in foreign countries whose economic well being depends on such technology.

“No doubt that when we have a city where 35% of New Yorkers have been raised in another country… This will be a big market opportunity and I feel that this is what the leadership of corporations – you know, they’re looking at it right now. We want to say, let’s address [the safety concerns,” Rodriguez said. “Just because [a company] has a license by the Department of Motor Vehicles, it doesn’t mean that we as a city can’t regulate it and that’s what I feel we are doing. I feel for Revel or anyone who wants to be a good business also needs to take care of the safety issues.”

Revel, after suspending its own service in July after the crashes, which included the death of CBS New York anchor Nina Kapur, said they were not familiar with the bill as it is yet to be unveiled, but that they will work with local officials to improve their services when or if they return.

“We have been in close communication with Council Member Rodriguez since our early pilot program, and he worked collaboratively with us to bring Revel service to his community members in Washington Heights. We remain committed to partnering with him and his team,” a Revel statement read. “We have continued to reach out and share updates with his team, and we have been awaiting his response over the past several weeks. We have reached out to his office to request information about the proposed legislation as we would welcome the opportunity to engage with him on this important topic. We cannot comment specifically on the legislation to be proposed, as it has not yet been released.”

According to a small excerpt of of the bill provided by Rodriguez’s office, if passed it would, “require the Department of Transportation to establish procedures by which shared moped organizations may apply for approval to operate shared moped fleets in New York City.”

While Revel enthusiast are still force to wait for the business to be relaunched, the company has instated some changes. Riders must complete a safety quiz and submit a selfie of themselves wearing a helmet before riding off into the cityscape.