How the coronavirus is crushing credit ratings | amNewYork
Coronavirus

How the coronavirus is crushing credit ratings FILE PHOTO: Traders wear masks as they work on the floor of the New York Stock Exchange as the outbreak of the coronavirus disease (COVID-19) continues in the Manhattan borough of New York, U.S., May 27, 2020. (REUTERS/Lucas Jackson)

The crippling effects of the coronavirus crisis have crushed government and corporate finances and sent debt soaring. As the charts below show, it is also crunching their credit ratings and causing a spike in defaults.

S&P Global has already made 1,190 downgrades so far this year. That is just 136 short of the record 1,326 set in 2009 during the global financial crisis, and more than four months are left in the year.

Almost 975 of those downgrades have been directly affected by COVID or the partly related collapse in oil prices. If cuts to rating outlooks are also added, that number rises to 1,939.

Fitch isn’t far behind. It has had nearly 1,500 negative rating actions altogether, although total downgrades is less than half S&P’s at 441.

Every sector has been affected by the coronavirus, but energy and oil companies, retailers, media and entertainment companies, airlines, travel and leisure, banks and capital goods firms have been hit the worst.

It has also been global. S&P has downgraded or cut the outlook on 1,015 firms in North America. Latin America’s 180 negative actions work out at almost 60% of the region’s ratings. That compares with 35% to 40% for the rest of the world.

Governments have been hit hard, too. Fitch has made a record number of sovereign downgrades — 32 rating actions affecting 26 sovereigns — including pushing two of the biggest borrowers, Italy and Mexico, into the danger zone. More than a third of its 118 sovereign grades are also still on downgrade warnings.

S&P has made 19 sovereign downgrades and 31 outlook cuts, while Moody’s estimates the virus will push up debt in the world’s richest nations by close to 20 percentage points on average, almost double the damage done by the financial crash. 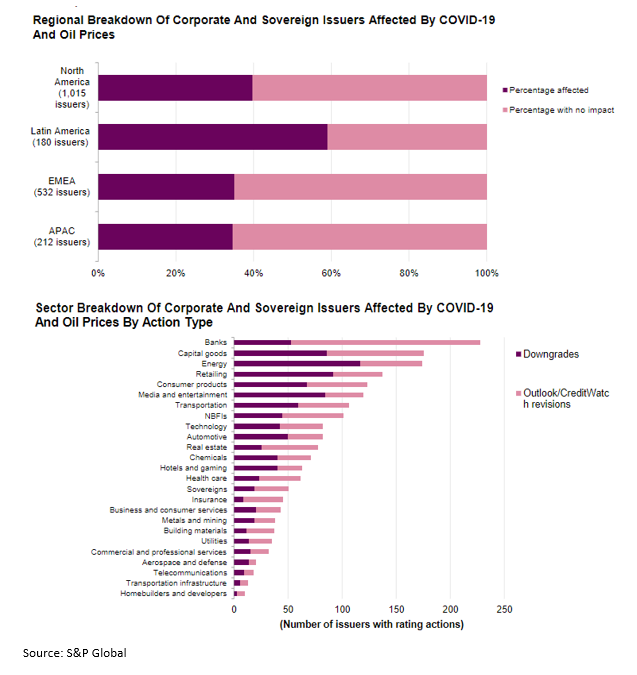 S&P’s count of fallen angels, or issuers downgraded to junk (“BB+” or lower) from investment grade (“BBB-” or higher) has hit 34 issuers with over $320 billion in rated debt among them, including Ford, Rolls-Royce, Kraft Heinz, Renault, Delta Air Lines, Lufthansa, British Airways and Macy’s.

They have all been companies so far, although Moody’s has cut South Africa to junk and Italy, India, Colombia, Morocco, Romania, Uruguay and Mexico are all near the brink with at least one of the main agencies.

Fallen angels are significant because the prospect of losing investment-grade ratings can lead investors to sell the bonds in favour of more creditworthy companies, pushing up their borrowing costs.

S&P also has a record 126 potential fallen angels on a warning. They have another $576 billion of bonds, meaning the amount of debt affected is likely to rise. 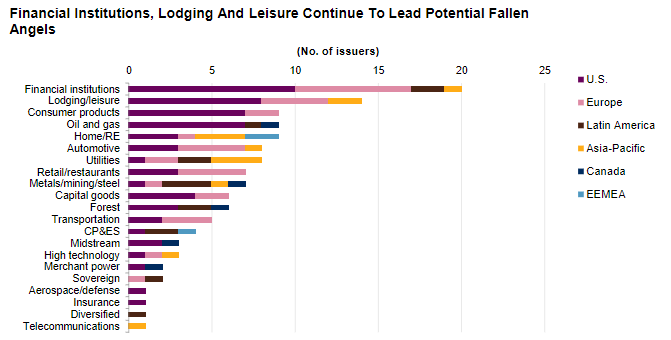 Canada has been the only country so far to be stripped of a prized “triple A” credit rating, by Fitch last month. Fitch now has the fewest “AAAs” since 1998, with a total of 10. That is less than 10% of the countries it rates, which is the smallest ever share of the sovereign portfolio.

Analysts at ING estimate that the collective share of triple-A rated government debt is now below 25%. S&P, which no longer grades the U.S. -the world’s biggest government borrower — as triple A, calculated it to be around 7% last year. 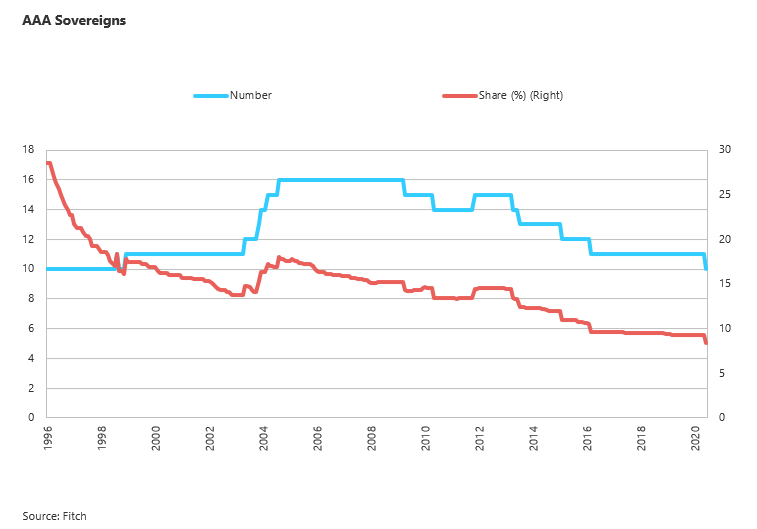 S&P has predicted nearly 290, or 15.5%, of U.S. junk-rated companies could default by next March in a pessimistic scenario, while in Europe it could reach 11.5%. Moody’s meanwhile saw Germany’s scandal-hit Wirecard became its first investment grade firm to collapse since Saudi Arabia’s Saad Group in 2009.

A record four sovereigns have already defaulted: Argentina, Ecuador, Lebanon and Suriname. All four were in trouble before the pandemic struck, but Fitch warns others are probable, with Gabon, Mozambique, Republic of Congo and Zambia all potential worries.