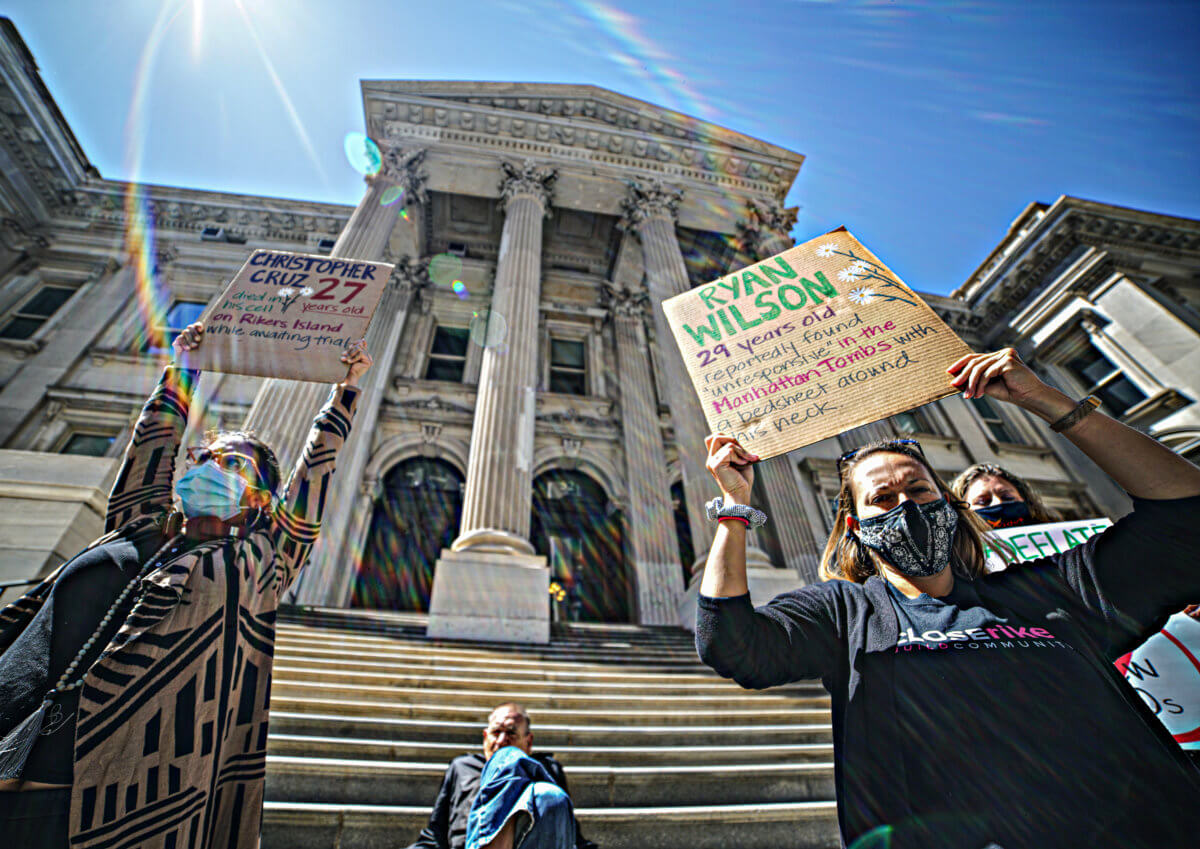 Formerly incarcerated individuals took a stand to fight for the rights of those still behind bars.

“[The] pervasive level of disorder and chaos in the facility is alarming,” was one of the many scathing remarks unveiled in the report.  It also pinpointed three overarching issues that are preventing progress: poor quality of facility leadership, dysfunctional deployment and overstaffing, and lack of accountability for officers responsible for misconduct.

One day following the report’s publication, advocates for prisoners’ rights took to the steps of the Tweed Courthouse at 52 Chambers St. in Lower Manhattan to push back against the proposed call for further officers integrated into the system.

This over 342-page document refers to staff mishandling and mistreating the detained, including those on suicide watch.

Members of the Freedom Agenda—an activist group that works with those who have been impacted by incarceration—demanded that Mayor Bill de Blasio and New York City Council concentrate on protecting the human rights of incarcerated individuals in lieu of increasing the number of corrections officers within jails.

“We are calling on the city to cancel that new class because the problem of violence according to the Nunez report is staff,” said Darren Mack, the co-director of Freedom Agenda.

Mack stated that de Blasio’s agreement with the Correction’s Officers Benevolent Association to hire 400 additional officers will exacerbate the ongoing issues within jails. Additionally, Mack believes it is unwarranted and unreasonable for New York to have eight times the national average of officers for each person in custody.

“DOC shame on you! Incarcerated people have rights too,” chants began to ring out with the protesters disgusted as Mack read out passages from the 11th Nunez report underscoring the factors that have contributed to overuse of force, including failure to address and/or provide basic services such as access to commissary and recreation time. When prisoners express their frustration with this lack of access, officers respond excessively the report found (close to 650 cases of excessive force were documented in December 2020).

Protesters say they are tired of the Mayor’s office not holding the Department of Corrections accountable for their mismanagement and lack of care for prisoner’s well-being, including the lack of suicide prevention training for officers and the accusations of sexual misconduct. Former prisoners of the correctional facility, family members of those incarcerated in NYC jails, and others shared horror stories of what the inside of Rikers Island is really like. Some discussed the excessive force used by officers, while others described the poorly managed site and lack of accountability by the staff.

“The inmates didn’t bother me; it was the officers who abused me, starved me, raped me,” said  Candie Hailey-Means, known as a solitary survivor, is a member of the NYC Jails Action Coalition (she spent two years locked in Rikers Island’s solitary confinement).

In addition to the scathing reports, the DOC Commissioner, Cynthia Brann, announced her resignation amidst the scandal in which six prisoners died within six months while in custody.

During a press conference on May 12, Mayor Bill de Blasio addressed the 11th Nunez report stating that his administration inherited an “extraordinarily broken” Department of Correction.

“We have proceeded to activate a plan to get off of Rikers once and for all. We’re ending solitary confinement entirely. We’ve made a huge number of reforms and changes – cameras all over, much better accountability mechanisms. And the monitor says all that. And the monitor also says there’s a lot of things that need to be improved and changes that have to be made. Which we see a lot of truth in, and we’re making those changes. It’s a very, very tough dynamic, especially because on top of everything else, we went through COVID. And that required even more challenges to be addressed in our Correction system. But I think this monitor has always struck a fair balance. And we take the recommendations to heart and we’re acting on them,” the Mayor told press.

In regard to the failures the report highlighted, the Mayor says that it’s a combination between the difficulty of Correction as a whole, the broken system inherited, and then the onslaught of the novel coronavirus further intensified these issues.

“The monitor has proposed specific changes that were put into place. We, for example, I’ve been critical about some of the approaches with staffing. We are bringing in additional officers to address that. But we also know the staffing challenges were created by COVID in large measure, where we have to spread officers out. We needed more facilities when we’ve been trying to actually reduce the number of facilities. Now that situation is finally changing. Court systems are back up and running. People are being sent out of our Correction system, to State prison. That’s reducing population. We’re being able to get to smaller spaces. We need less officers for that,” the Mayor said during the press conference.

While the Mayor believes DOC is making an ongoing effort to address these issues, the Legal Aid Society believes that these problems have been going on for decades and are perpetuated by a lack of action by the DOC.

“Despite the Mayor’s rhetoric of reforming Rikers Island, the New York City Department of Correction has been unable or unwilling to take the actions necessary to dismantle the culture of brutality and incompetence in the jails,” said the Legal Aid Society.