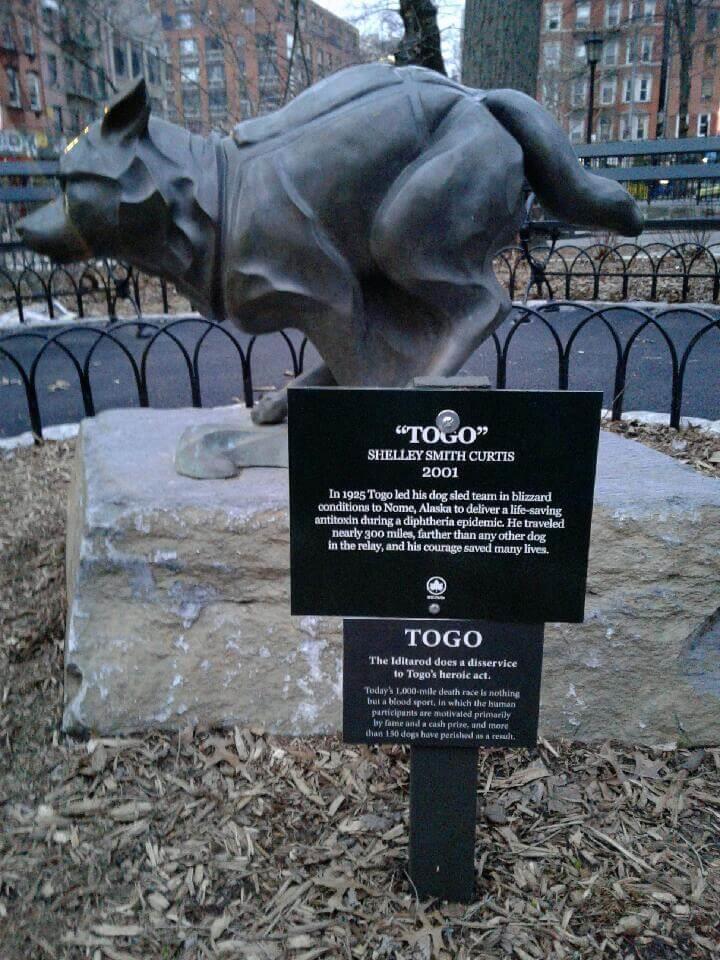 Updated Feb. 3, 2020 at 7:40 p.m. A sign was put up last week in Seward Park by People for the Ethical Treatment of Animals (PETA) protesting against the Iditarod race in Alaska, saying it has led to mistreatment of sled dogs, including many deaths.

The sign went up on Wednesday, Jan. 29, at the bronze Togo statue in the Lower East Side Park. The 2001 statue, by Shelley Smith Curtiss, honors the heroics of the husky named Togo, who in 1925 led his sled team through Alaskan storms to deliver serum for children during a diphtheria epidemic.

The PETA sign was installed just below the official sign for the statue, which is temporary until a plaque is installed by NYC Parks, in collaboration with Seward Park Conservancy and supported by Disney+, which released the film “Togo” this past December.

“The Iditarod does a disservice to Togo’s heroic act,” the PETA sign read. “Today’s 1,000-mile death race is nothing but a blood sport, in which the human participants are motivated primarily by fame and a cash prize, and more than 150 dogs have perished as a result.”

A PETA spokesperson said the sign was part of the group’s campaign against the annual dog sled race, which occurs every March and was first run in 1973. PETA says that along with over 150 dogs dying from the race, that number doesn’t include other dogs killed for not being fast enough or who died in the off-season while chained outside.

A recent investigation by PETA of the dog sled industry alleged mistreatment of dogs, including being chained outside, denial of veterinary care, and being forced to run during exhaustion and dehydration.

“Togo had a lifesaving mission, while dogs used in the Iditarod are forced to race vast distances in subzero temperatures, all because humans want to win a trophy and a cash prize,” said PETA Executive Vice President Tracy Reiman in a statement. “PETA’s plaque will ensure that New Yorkers know that the Iditarod is nothing to celebrate and must be stopped.”

An NYC Parks spokesperson said the PETA sign was removed the next day, on Thursday, Jan. 30, since Parks rules prohibit any unlawful postings of a sign or notice.

A spokesperson for the Iditarod told this paper that the sled dogs receive excellent care and that the canine athletes are the top priority. This includes wellness checks from race veterinarians throughout the race and for dogs in communities along the trail, the spokesperson said, along with pre-race physical exams for each dog. Also, any musher found to be treating dogs inhumanely is disqualified and banned from future races, the spokesperson added, and mushers must meet kennel standards set by the Iditarod Trail Committee.

“We take great pride in our role of providing and promoting excellence in dog care before, during and after the race,” said Rob Urbach, CEO of the Iditarod, in a statement to this paper. “As our time-honored tradition and state sport is continuously attacked by outside activist groups such as PETA, we want to reiterate that we are 100% committed to ensuring and expanding best practices in coordination with the entire veterinary community to continue to preserve the rich culture and heritage of the sled dog. The Iditarod is, and always will be, an advocate for dogs.”