2016 all over again? Investors ready for big market moves as U.S. election nears Market volatility is back – and investors expect more wild swings in the coming weeks and months as the U.S. presidential election closes in.

Regardless of who wins the Nov. 3 election, some market watchers say, markets are likely to grow more turbulent. Economic uncertainty resulting from the coronavirus pandemic still looms large, and the possibility of a delayed vote count due to a large number of mail-in ballots has also unsettled some investors. Moreover, a buildup of positions in big tech-related stocks has increased risk, as seen in a sharp market sell-off on Thursday.

“This is just a situation where all the conditions are ripe for an extraordinary profit” from volatility, said James McDonald, chief executive of Los Angeles-based hedge fund Hercules Investments.

The Cboe Volatility Index <.VIX> has climbed over the last two weeks, first as investors chased further upside in U.S. stocks through call options and then as they sought protection against a tumble in indexes at record highs. On Thursday, the VIX jumped to its highest level in nearly 10 weeks as the S&P 500 <.SPX> fell 3.5%.

Several investors say that the VIX could climb further as the election approaches, especially given that certain indicators show a tightening race. In betting markets, Democratic nominee Joe Biden’s lead over President Donald Trump has significantly narrowed, according to data from RealClearPolitics.

Indeed, second-month futures <VXc2> on the Cboe Volatility Index <.VIX>, which expire in late October, point to expectations for bigger market moves around the election period. The gap between second-month futures and the VIX widened to a record high earlier this week. 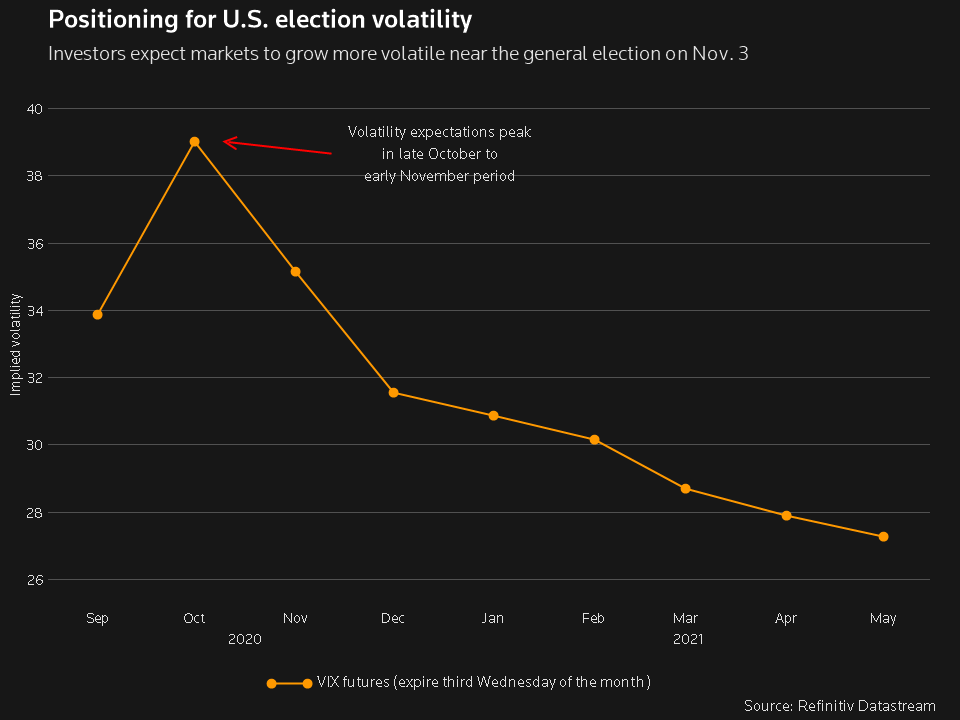 Recent history shows that election results can have powerful effects on asset prices.

Trump’s largely unexpected victory set off violent swings in markets on election night in 2016, with gold, the Mexican peso and stock futures among the assets experiencing wild gyrations.

Earlier that year, the British pound <GBP=> plunged to its lowest level against the dollar <=USD> in decades after the United Kingdom voted to leave the European Union.

This time around, a drawn-out count of mailed-in ballots could be one key catalyst for volatility, said Arnim Holzer, macro and correlation defense strategist at EAB Investment Group.

“Volatility could actually last … for longer because of the nature of the election process itself, no matter who wins,” Holzer said.

He said he had already profited from Thursday’s spike in volatility, which sent UVXY 20% higher to $28.90, and he anticipates that the ETF will rise to $40 before the end of the year. By actively trading UVXY as it rises, McDonald believes he can make a $1 billion profit on his $55 million investment. If UVXY were to slump below $10 close to year-end, however, McDonald would lose his remaining investment in the December calls.

The strategy could pay off, said Henry Schwartz, head of product intelligence at Cboe Global Markets, but even with election angst, further volatility spikes are not inevitable.

Other investors have added hedges to their portfolios. Matt Thompson, managing partner at options firm Thompson Capital Management in Chicago, holds long positions in both U.S. stocks and VIX-linked assets such as the Barclays iPath Series B S&P 500 VIX Short-Term Futures ETN <VXX.P>. He expects the VIX to climb in the weeks shortly before the election, as it did in 2016.

Holding assets linked to the VIX for long periods can be money-losing, given that the index tends to revert to its long-term average rather than rise steadily.

But the recent simultaneous rise of the VIX together with U.S. stocks has made such positions profitable, Thompson said, and he expects them to hold gains as the election approaches.

“Right now, it’s a great scenario for people that are hedging,” he said.