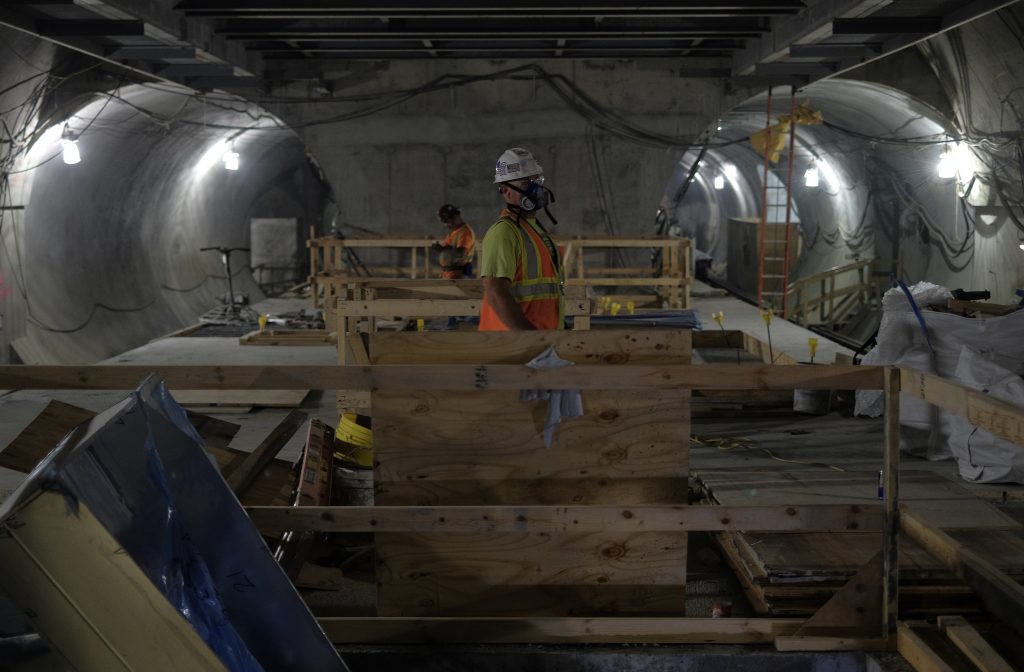 AECOM has had a hand in high-dollar projects such as East Side Access (pictured above) and the Second Avenue Subway, but activists are beginning to express convcern in the sheer number of contracts it is awarded by the city and state. (Photo: Mark Hallum/amNewYork)

One of the world’s largest construction firms continues to seal the deal on bids on public construction projects across New York City — both large and small, and both controversial and uncontested.

But some advocates question how AECOM keeps on scoring winning bids and whether taxpayers are truly benefitting.

From the new World Trade Center, to East Side Access, the East Coast Resiliency project at East River Park and the borough-based jails, AECOM has been rebuilding the city for a number of years with taxpayer funding, and the contracts are not lost on activist groups in the communities impacted.

One source tells amNewYork, however, that they are suspicious of the AECOM for a contract with Miami-Dade County in Florida for sewer upgrades that led to project’s cost skyrocketing after the bid had been awarded.

Originally awarded to AECOM for $96 million, the contractors were soon asking for an additional $56 million, claiming complications from sea level rise, the Miami Herald reported. With the sewer replacement being federally mandated and partially funded by the federal government, Miami-Dade County commissioners approved the additional funds through residents’ water bills, which were increased to pay for the upgrades.

AECOM the exhausted the $96 million granted in 2014 within five years; the county had expected the funds to last 15 years.

As of May, AECOM announced that it became the official contractor behind the $107.4 million contract to build four new jails across the city as part of the de Blasio administration’s $8.7 billion initiative to close Rikers Island. AECOM and Hill, the two companies partnering in the effort, are responsible for overseeing the project.

After the City Council approved the part of the ULURP application to build the jails on Oct. 17, AECOM held an open house at Brooklyn’s Industry City, which attracted a protest by the group No New Jails NYC. The organization formed in 2018 to advocate for the abolition of incarceration in all forms, and especially rallied against the borough-based jails plan.

“We are here today because AECOM has a contract worth $100 million to design and build these four new jails,” according to a statement from the group on Oct. 19. “We followed the money and we know your address. AECOM’s profiteering off of incarceration is coming to an end.”

A spokesman for AECOM did not immediately return a request for comment on these items.

While the borough-based jails still have a 2026 deadline, AECOM is further along in its effort to help the Lower East Side of Manhattan with a resiliency project to protect residents from both sea level rise and 100-year storms.

The East Side Coastal Resiliency project tapped AECOM to survey and map the East River Park in order to plan for raising it by up to 10 feet before 2023, and the plan has residents worrying about accessing vital recreation space while the 2.4 miles of coastline from Montgomery Street to East 25th Street is built over.

Although residents were open in their objection to the plan at an Oct. 3 City Council hearing, the plan is not without political support from local politicians.

Pat Arnow from East River Park action expressed concern that the city was transparent in the way they have changed the plan for the park over the years. She feels that if the city cannot be a good neighbor, an international construction company like AECOM will not be either.

“They’re apparently just a huge construction company that has no interest in preserving our environment,” Arnow said.

Antoinette Pitta, wife of Vito Pitta and partner in the firm, contributed $2,800 to the de Blasio campaign on June 26.

AECOM is listed as a client on Pitta Bishop & Del Giorno LLC’s website.

Editor’s Note: An original version of this story said AECOM-Hill’s contract with the city build the borough-based jails was for $107 billion. The total cost of the jails is estimated to $8.7 billion while the contract with the city Department of Design and Construction is for $107 million. A clarification has also been made regarding AECOM’s role in the East Side Coastal Resiliency project thus far.