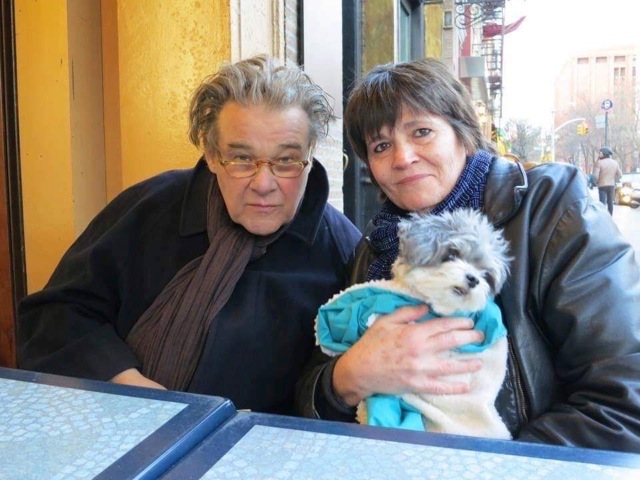 BY JANE HEIL USYK | Last week on Oct. 1, I wandered up to Pain Quotidien on Eighth Street and Fifth Avenue, ordered a coffee, and sat facing the windows and Eighth Street. I wondered why I was doing this, and the answer came: to see if Arnie walks by.  It would have been very bizarre if he had, because he died on Sept. 24th.

Arnold Baskin was a superb guy who had spent years in Paris in the 1970s and had become an expert on French cinema (and all things French) and parlayed that into teaching jobs — first at Boston University and then, for 40 years at NYU, where he was a tenured associate professor of film at Tisch School of the Arts.

Arnie was a kind of cultural conduit, an international yenta, so to speak. He introduced people he thought should meet each other and as a result, their lives were larger, and grander, and more international.

He had an apartment in Washington Square Village on Bleecker Street and lived partly in an apartment on Eighth Street, where his companion of 40 years, Tia Lemke, lived. Arnie kept an eye on Tia, and was a constant wise presence in her life. They “adopted” a tiny Maltipoo named Alfie, and took him with them everywhere until he died some years ago.

He had done stints in Paris, Cuba, Puerto Rico, Israel, and Romania. He learned Cuban and Puerto Rican dances, which he danced for the rest of his life. He had an 18-month internship in filmmaking in Puerto Rico at the beginning of his career.

He was a writer, director, and cinematographer at the Public Broadcast Laboratory in New York City, at ORTF (French Television), and at Israel Television. He was made a chevalier in the Order of the Palmes Academiques by the Prime Minister of France and in 1998, he won a distinguished teaching medal at NYU.

He taught a course required of every entering freshman, “Sight and Sound,” in which each student is required to write, direct and create five short films and work on each others’ films. It is a very high-pressure course at 14 weeks long — there is not a lot of time for thinking and ruminating, and students have to focus and create, constantly.

He had been born in Brownsville, Brooklyn, to a Jewish family when Brownsville was almost all Jewish. He had two older brothers. The oldest had been killed in World War II.  The middle one, Alex, had retired as a history professor at the State University of New York at Stony Brook when he died about five years ago.

I had known him for about 15 years, but I don’t recall how I met him, except that it had something to do with my filmmaker cousin Stuart, who lived on Great Jones Street. Someone invited us to his grand 70th birthday party, hosted by Tia, at Gonzales y Gonzales on Broadway and Houston streets.  It was a crowded event, with food and drink and great live Cuban music.  It was very cheerful and Arnie danced a lot.

Arnie turned Bruno’s at LaGuardia Place into his version of the Select in Paris, continuing the sociable French practice of hosting groups of friends outdoors at cafes. When Bruno’s closed, he moved his coffee hours to Silver Spurs down the street, a diner with a sizable outdoor section.  But when Silver Spurs also closed, Arnie’s coffee hours ended, too.

We never went to one of his classes, but we knew, because he talked about it, that a major feature of an early class would be “cheap restaurants.” Students new to the Village and to NYU were already spending plenty, Arnie reasoned, and they needed guidance on where to eat cheaply. He told them about Chinatown’s very cheap dumplings and Mamoun’s, where you can get a falafel sandwich for only a few dollars. Students learned a lot about cheap food in Arnie’s classes and had great conversations in addition to learning about movies. To some of us, that was really all you needed.

And if any former students hit the big time, they had an obligation to take Arnie to lunch at Peter Luger, the steakhouse in Brooklyn.