Take Five: We’re all going on a summer holiday (maybe) FILE PHOTO: Tourists are seen at Stradun street in Dubrovnik, amid the spread of the coronavirus disease (COVID-19), Croatia, July 28, 2020. (REUTERS/Antonio Bronic)

August conjures up images of beaches and sunshine but it may not bring much respite to travel and tourism stocks. Battered by lockdowns, tourism has lagged a broader market recovery, with airline, hotel and leisure shares 20%-50% lower year-to-date.

After an uptick since the start of August – Europe’s travel and leisure index has risen 7% – the lifting of a U.S. advisory against foreign travel and initiatives, such as Spain’s offer to cover travellers’ health costs, could provide some support.

But more is at stake than share prices – shrinking tourism may shave 3%-11% off countries’ GDP. And as stricken airlines and hotels lay off staff, mass unemployment is a potent threat. 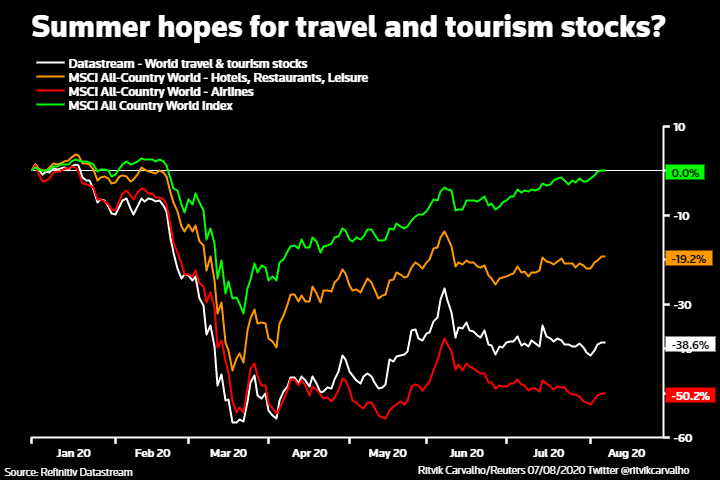 We will soon learn if the “buy everything” trade has legs.

The U.S. Congress’ dithering over approving more stimulus has pushed gold to record highs above $2,000 while U.S. Treasury yields have lurched lower. But equities too are riding high – clearly the powerful backstop of central bank stimulus is holding firm.

The rush for everything – risk as well as safety – has lingered. But positioning on most markets is stretched and such good news as there is, from earnings to vaccine trials, seems priced in. Upcoming data, election news plus Sino-U.S. trade talks might show the difficulties of having one’s cake and eating it. 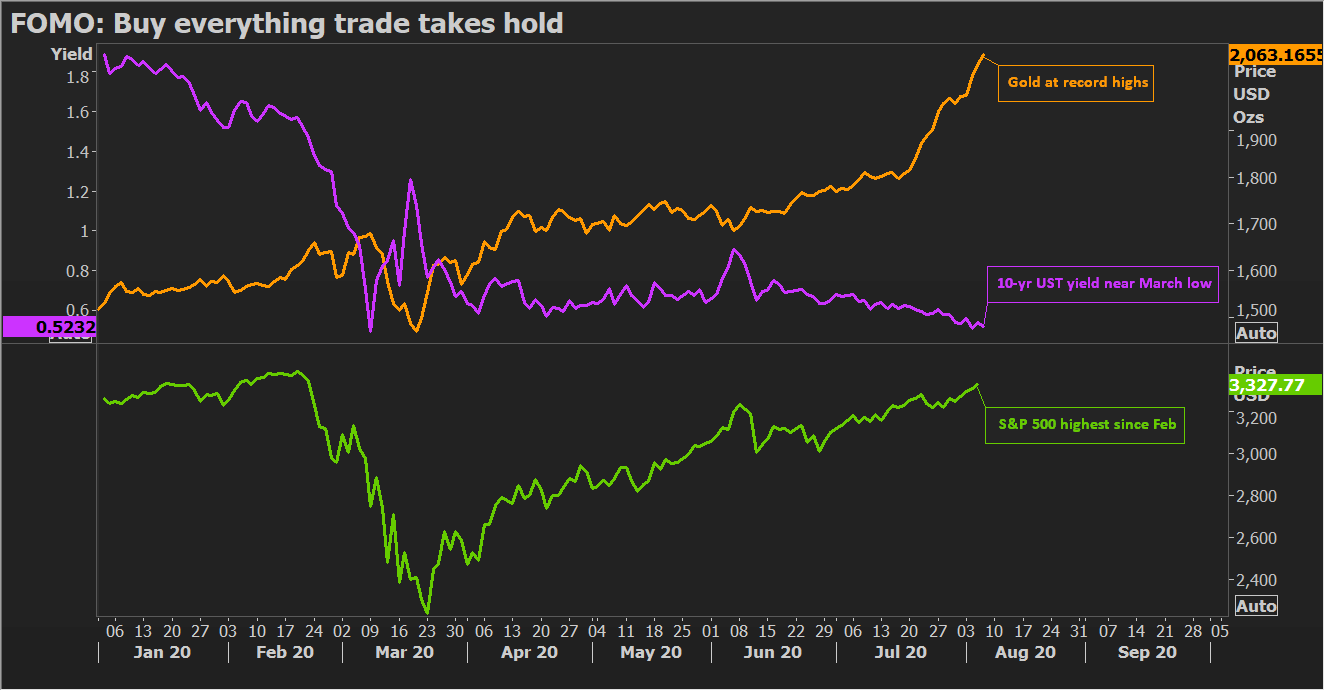 3/LOOKING INTO THE FUTURES

The U.S. election has yet to have much traction on markets, but that may change soon. Presumptive Democratic nominee Joe Biden will announce a running mate before the Aug. 17 Democratic convention. President Donald Trump meanwhile is intensifying his campaign against mail-in voting, which he says encourages fraud.

Some investors are moving to hedge portfolios against volatility around the Nov. 3 election. That shows up in futures on the Cboe Volatility Index <.VIX> <0#VX:>, which shows a bump in expectations for market swings around then.

The implied volatility rise looks especially steep, given the VIX itself has eased to 5-month lows. The spread between August <VXQ0> and October <VXV0> VIX futures is at 5.5 points, the widest since the contracts began trading.

The focus may be less on the outcome and more on possible delays in tallying results, due to the widespread use of mail ballots this year. Volatility and legal challenges remain risks. 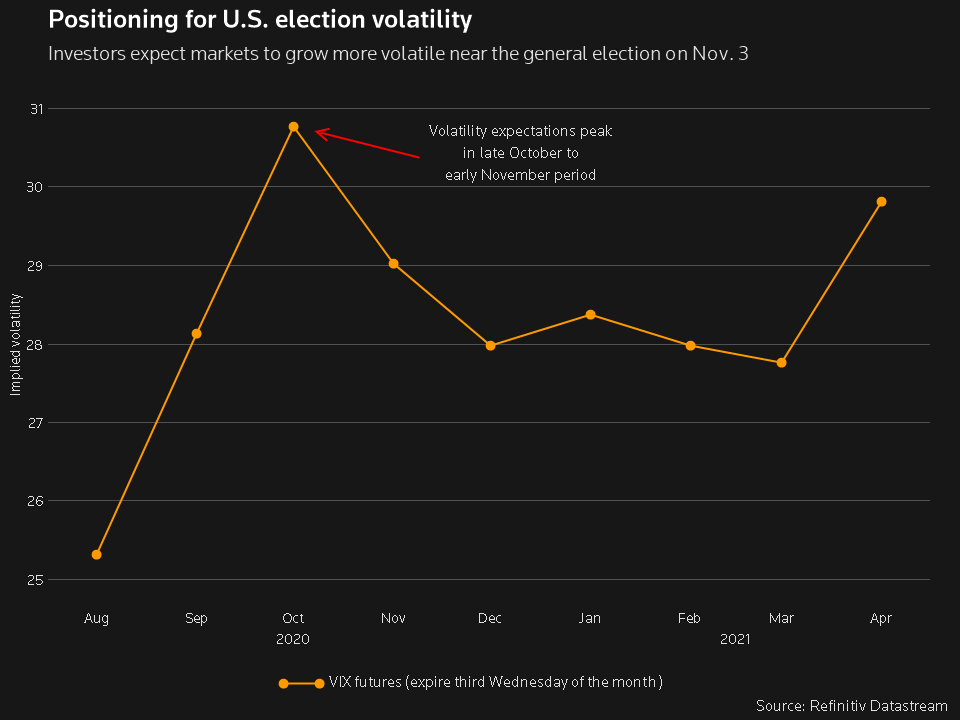 Turkey’s central bank is acting to limit the lira’s plunge, using backdoor tools that bankers estimate could tighten policy by up to 300 basis points.

But tricks, such as changing the composition of funding, only buy time. Previous crises suggest only big interest rate hikes are effective. That’s what markets are betting on.

When and how the central bank acts bear watching. More lira weakness will worsen inflation, and compromise companies’ ability to repay external debt. And if citizens’ confidence in the lira and local banks evaporates, authorities will be powerless to stop a currency collapse. 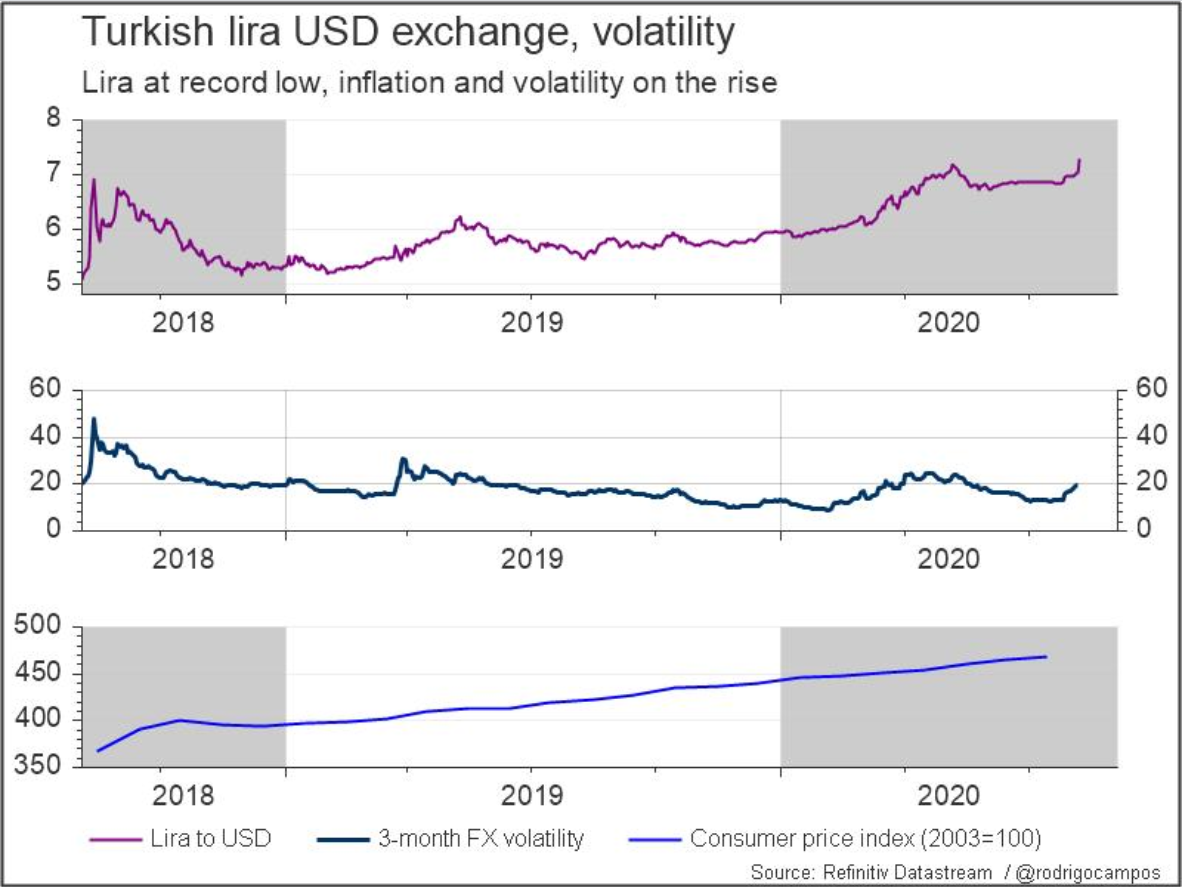 Bob Lighthizer and Liu He will have some catching up to do on Aug 15, when they dial into a video conference to review the U.S.-China trade deal.

The review coincides with deteriorating ties. Following Mike Pompeo’s combative speech and tit-for-tat consulate closures, Chinese tech firms TikTok and Tencent are in Trump’s crosshairs. A planned health secretary visit to Taiwan is raising Beijing’s hackles. So far the markets remain confident in the trade relationship. But Beijing is behind on purchase targets for U.S. goods and its surplus with the United States rose by 10% last month. The yuan <CNH=> has backed off five-month peaks ahead of what may prove an awkward video conference.