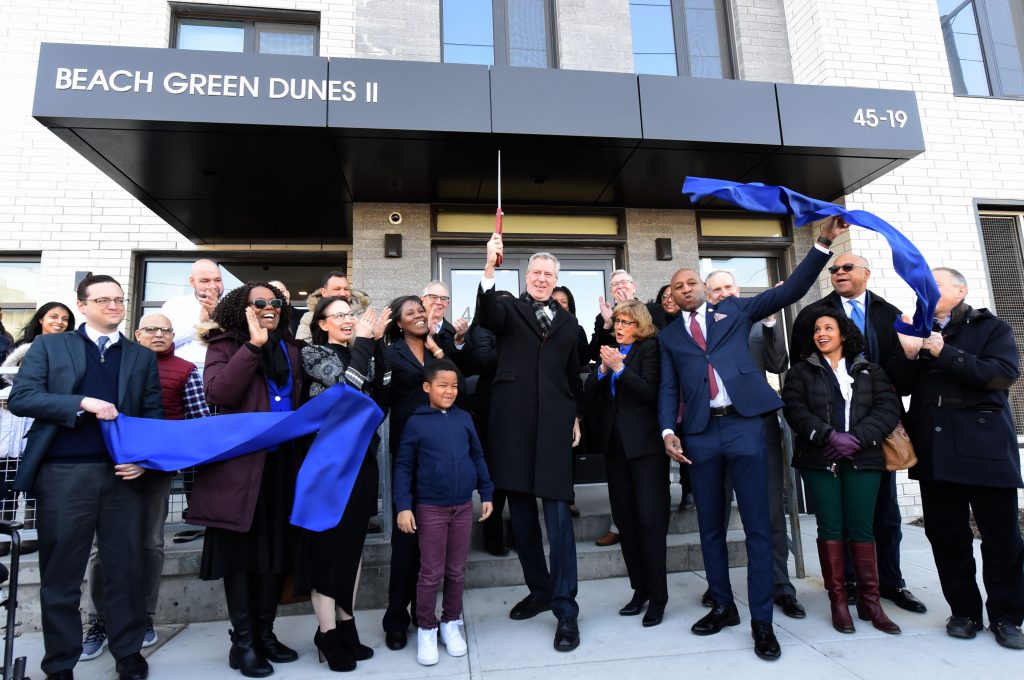 The city’s goal to create 300,000 affordable housing units and keep them truly affordable took a step in that direction with the ribbon cutting at Beach Green Dunes II in Queens.

Ayesha Hameed, a mother with three young children, received a three-bedroom apartment in the Far Rockaway development for $1,900 a month,  – at the same cost she was paying for a one bedroom on Beach 26th Street. Her reaction when she toured the new space overlooking the Atlantic Ocean and a block from the A train was, “Perfect!”

“Our rent for a one-bedroom went from $1,500 to $1,900 in an apartment that was so tight, I couldn’t breathe,” said Hameed as she held her 7-month-old son Ayfan while her two children, Ayan, 8, and Ayat, 6, played in their new separate bedrooms. “My husband, Ahsan Altaf applied to Housing Connect and three months later, they called us up and said we got the apartment.”

She and 127 other families will live in the new Beach Green Dunes, which has resilient and eco-friendly apartments meant to keep mostly residents of Rockaway with very low to moderate incomes in the community.

Mayor Bill de Blasio cut the ribbon with city officials and developers of the state-of-the-art project on Rockaway Boulevard and Beach 45th Street on Feb. 19, proudly showing that his administration was in the right direction of their goals to create the promised affordable housing under their program entitled “Your Home New York City,” to “keep New Yorker’s in New York.”

“I know New Yorkers feel as if they are losing their grip on this City and fear their children will no longer be able to afford to call New York home,” said Mayor Bill de Blasio. “We are changing that reality, and with Your Home NYC, will be in the corner of every family fighting for neighborhoods they can afford.”

Affordable housing has been a hallmark of the administration, requiring developers in some cases provide affordable apartments in their projects to get permits.

“I get a sickly feeling when I see signs for luxury condos starting at $3-5 million and it is clear they are not for any of us,” de Blasio said. “This is a place meant for working people rather than force working people out of New York. If we make this city just for the elite, we will lose the heart and soul of this city and this is part of fighting back.”

He pointed out that the unchecked rising rents are leading to illegal evictions, stealing security deposits, and forcing people to take illegal and dangerous basement apartments.

Deputy Mayor Vicki Breen said the city seeks to create 300,000 affordable apartment by 2026 – the population of Denver or Washington D.C.

“We are building affordable housing on city land, but also resilient and energy efficient,” she said. “We want to invest in community and neighborhoods that support families. For decades, there has been disinvestment in this neighborhood and then there was Hurricanes Sandy and Irene that caused so much damage. This is not just affordable housing, but a green investment.”

Beach Green Dunes II features geo-thermal energy generation from ground water taken from 36 wells 450 deep into the ground – water that is already more than 50 degrees – city water can be close to freezing, thereby reducing energy to heat the water. This results in a 75% savings on water heating. The development also features extensive use of solar panels, both on the roof and in the court yard.

Mike Domenici, senior project manager for the developer L+M Development Partners, conducted a tour of the development, proudly showing off the thermal risers in an apartment and later, the vast solar 200 kilowatt array on the roof, designed to cut electric use by 50%. Officials say residents can use the ocean breeze to cool their homes in the summer or spend $10 a month on air conditioner use.

Hameed remembered Hurricane Sandy, and while they tried to wait out the storm with her in-laws in a third floor apartment, but they were stuck without utilities for weeks and had to move in with family in the Bronx for two months. “Oh my God, I couldn’t believe how high the water was,” she recalled.

During Hurricane Sandy, most of this community was under several feet of water. The new developments have no basements, are slightly elevated from the street and most of the utilities are located on the second floor. “And because the building is tiled permeable surfaces, the water might come in, but then, it will drain right out and includes bioswale gardens to treat and retain storm water,” one official said.

Councilman Donovan Richards toured the site with State Senator James Sanders where they both agreed this was the right direction for new housing in the community.

“Housing instability creates a snowball effect of issues for anyone, anywhere in Queens. We know this already,” said Council Member Donovan Richards, District 31. “This project is a crucial step in revitalizing Rockaway sustainably. Geothermal energy in affordable housing is a smart way to heat buildings, generate electricity and save money. That is how you revitalize a neighborhood and an economy at large, by starting with the home.”

“Affordable housing is critically important as more and more people struggle to put a roof over their heads,” said New York State Senator James Sanders Jr. “I am proud to welcome the new Beach Green Dunes II apartment complex to Arverne, which be environmentally friendly and will contain more than 100 new affordable housing units, giving priority to Community Board 14 residents as well as municipal employees and the disabled. Now, let’s go beyond this.”

Beach Green Dunes also earned nearly $112,000 in rebates from PSEG Long Island for installing energy efficient options in the new building. Collectively residents are expected to save approximately $30,000 per year on their electric bills as a result of the efficient geothermal system and LED lighting throughout.