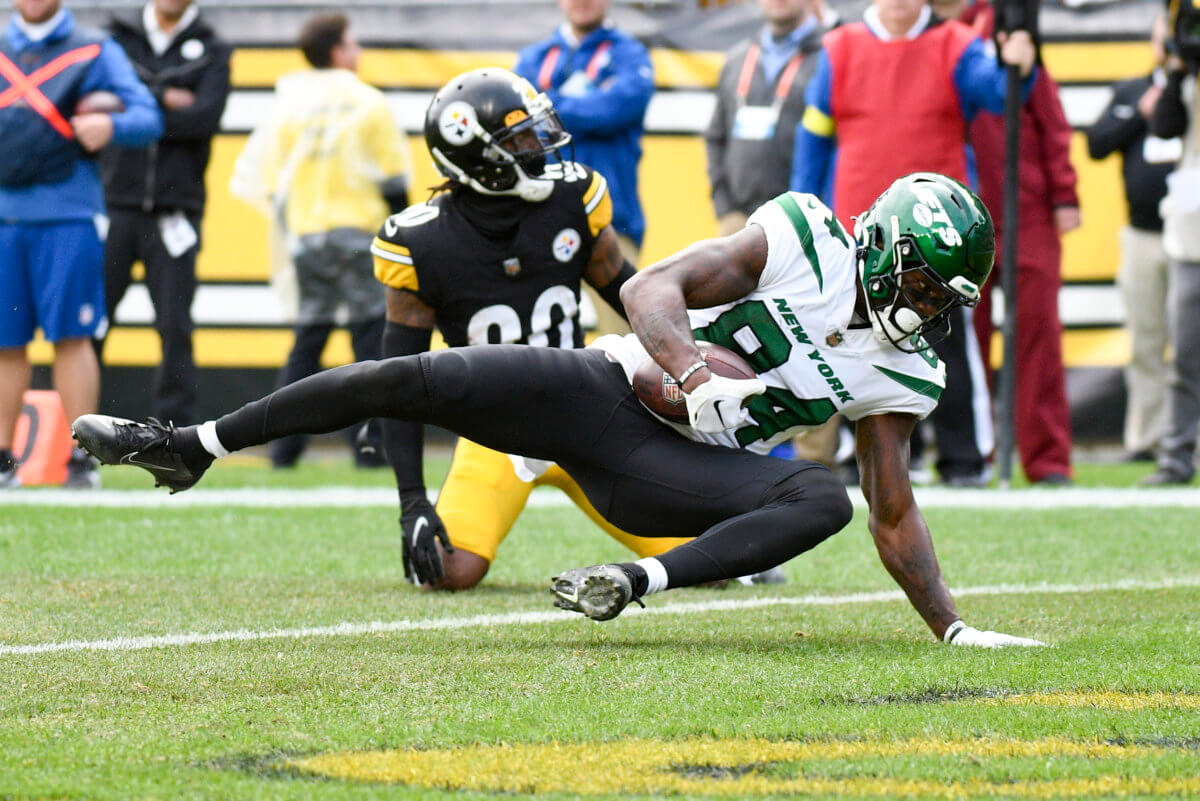 Jets wide receiver Corey Davis heads to the end zone and a touchdown during the second half of their Week 4 matchup.
AP Photo/Don Wright

The New York Jets enter a pivotal week of their season against one of the best team’s in the NFL without one of their most productive wide receivers.

Against a juggernaut in the Buffalo Bills, the Jets will need all the help they can get.

Speaking to reporters Friday morning, head coach Robert Saleh announced that Corey Davis would miss a second straight game due to a knee injury. Saleh later noted that the team hopes to have Davis play after the Jets’ bye week after their contest Sunday.

Davis has 19 catches for 351 yards and two touchdowns in seven games this season. He signed a 3-year, $37.5 million deal with the Jets during the 2021 offseason. In his place, the Jets expect Denzel Mims, the team’s second-round pick from 2020 to help move the football against the ninth-best pass defense in the NFL.

It wasn’t all bad news for New York on the injury front though. Rookie pass rusher Jermaine Johnson is expected to play after missing last Sunday’s 22-17 loss to the Patriots.

Their opponent isn’t immune to the injury bug though either.

For the Buffalo Bills, their contest at MetLife Stadium on Sunday will be an opportunity for the top seed in the AFC to take an even larger lead in their division race. The Bills currently lead the AFC East by two games but do not have the tiebreaker over teams like Miami at this point in the season.

They’ll have to circle the wagons without one of their top defensive players though. The team announced that safety Jordan Poyer will miss Sunday’s key showdown with an elbow injury.

It’s been a frustrating season for Poyer. The top safety has been battling various injuries throughout the season, and missed games against the Dolphins and Steelers. He was deemed day-to-day by the Bills coaching staff earlier this week as the team continues to evaluate him.

Pass-rushing dynamo Von Miller, on the other hand, was a full participant in practice on Friday and does not have an injury designation heading into week nine. Tackle, Spencer Brown, and linebacker, Matt Milano, are considered questionable.

The Jets (5-3) will look to end a five-game losing streak to the Buffalo Bills (6-1) on Sunday. Buffalo meanwhile will be looking to complete a stranglehold on the division en route to their third straight division title.