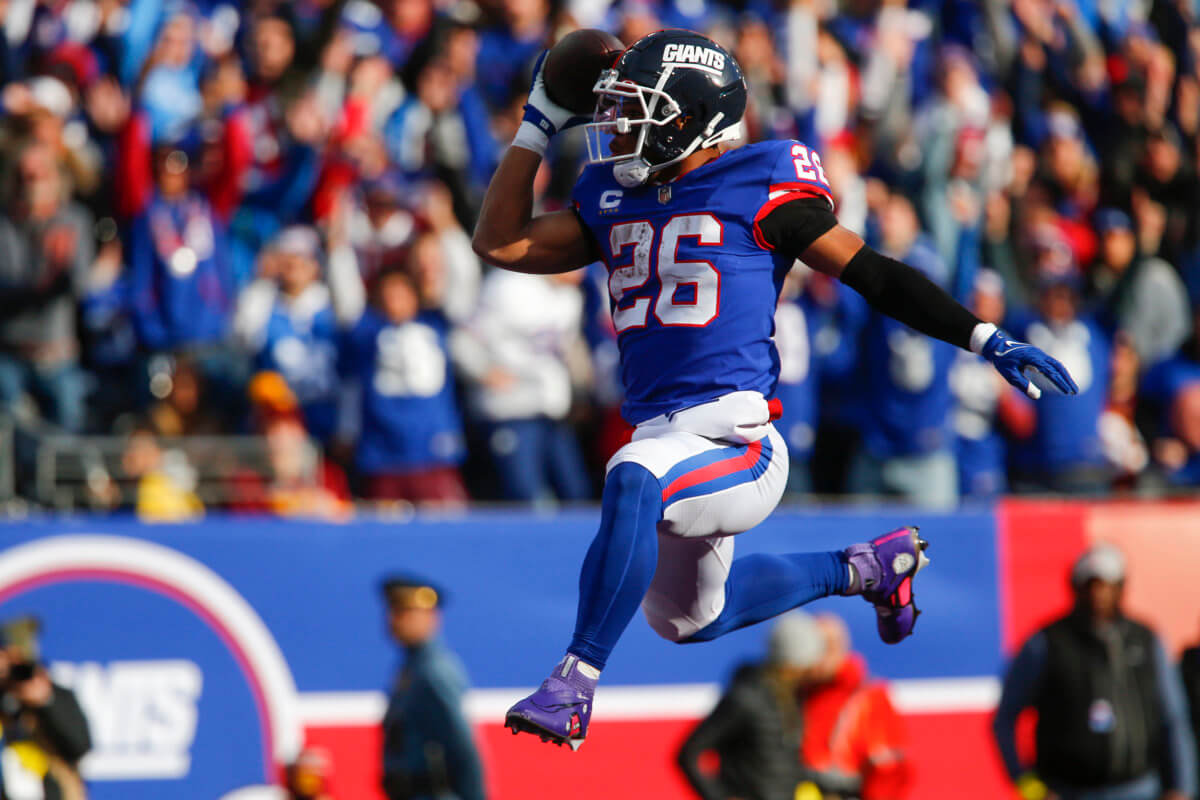 While Saquon Barkley has continued to play a vital role week in and week out for the Giants, it’s the one he has played off the field that has earned him a nomination for the Walter Payton Man of the Year award.

Barkley is one of 32 nominees from each NFL club and the honor goes to the player “for outstanding community service as well as excellence on the field.” The Giants back has had a resurgent season on the field and has pushed forward with a number of charitable endeavors off the field.

The winner of the award is given a patch to wear on their jersey for the remainder of their career to signify they won. Former Giants quarterback Eli Manning was named the co-winner of the award in 2016 with Arizona Cardinals receiver Larry Fitzgerald and is the only Giants player to win it in its 52-year history.

“Being the recipient for the New York Giants and getting honored is truly amazing,” Barkley said in a press release. “It’s something that was a goal of mine when I got drafted. I want to win the whole thing. But it’s not just about winning the award. It’s all about the work you do within the community to try to make an impact and try to make change. I’m very fortunate. I’m very blessed to have the opportunity to play the sport that I love and live out my dream and be able to have an impact on children. That’s something I wanted to do from the moment I stepped on the field and the moment I was drafted by the Giants. To finally be a recipient for them and hopefully the winner for them is something that’s a dream of mine and a goal of mine. Hopefully, I’m able to accomplish it.

“But being honored and being the recipient for the New York Giants is a blessing within itself. If you don’t win the award, I know the things I was able to do in the community and the impact that I’ve been able to have. If someone beats me out for the award, that’s a good thing. That’s a good thing for the world. That’s the only thing I’m about: spreading positivity, spreading good vibes and trying to make a change.”

Barkley has continued his exhaustive charitable efforts in New York, New Jersey and Pennsylvania. The 25-year-old began working this year with Children of Promise, a New York City non-profit that supports kids who have been impacted by the incarceration of a family member by providing after-school programming and summer camps, counseling and therapy, mentoring and family support.

He hosts three kids from the program, along with a staff member, at every Giants game. Barkley has continued his work with Covenant House New Jersey, which helps young people 18-21 who are facing homelessness and trafficking, and he partnered with St. Luke’s University Health Network to establish the “Saquon Barkley Center of Excellence.”

Additionally, Barkley has sponsored an annual back-to-school drive in Whitehall, Pennsylvania, gives out Thanksgiving meals to needy families in Lehigh Valley and handed out 500 turkeys and meals in the Bronx last Thanksgiving.

On the field, Barkley has returned to his old self rushing for 1,055 yards through 12 games and has recorded 40 receptions and eight touchdowns. He surpassed the 1,000 yard mark on the season during Sunday’s tie against the Washington Commanders, making him just the fourth player in franchise history to record at least three seasons of 1,000 or more rushing yards.