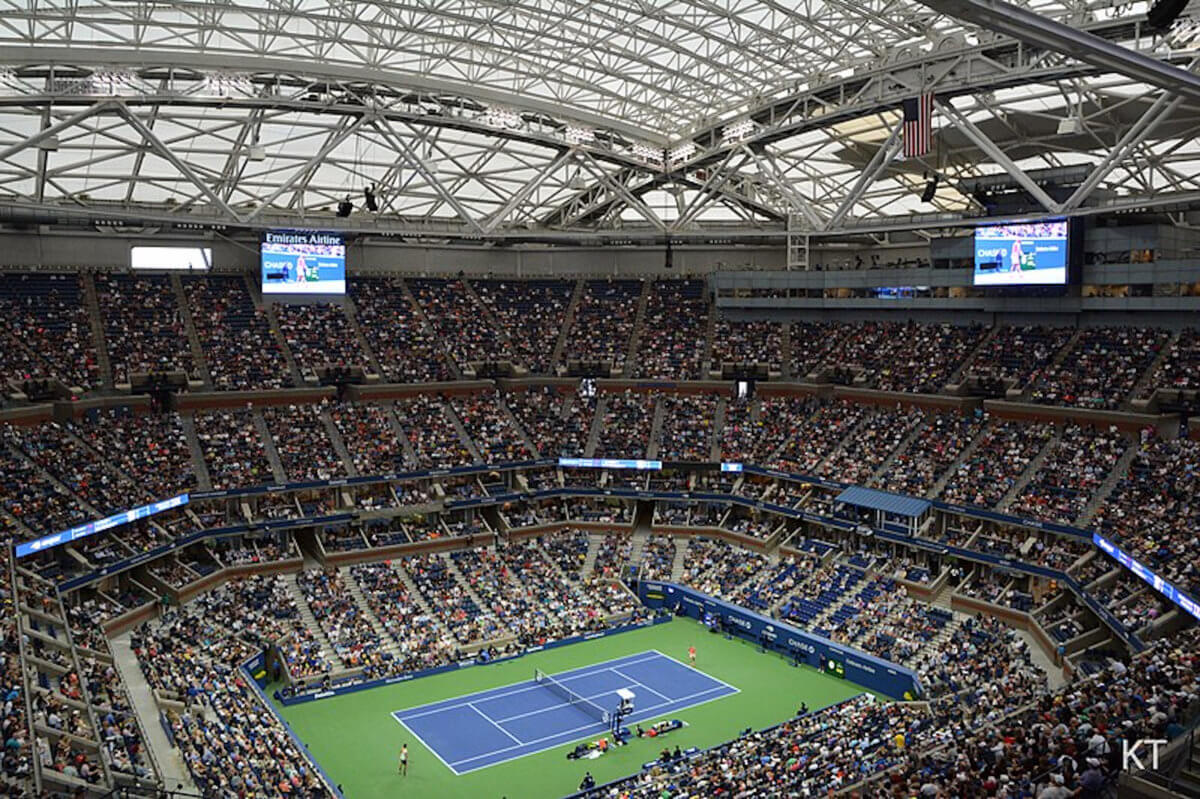 Arthur Ashe Stadium at the US Open (wikimedia commons)

The US Open is consistently one of the biggest sporting events of the summer in New York City. Every year, over 700,000 fans from all across the globe come to the Billie Jean King National Tennis Center in Flushing Meadows, Queens for two weeks of elite tennis in the final Grand Slam of the season.

While the action can be enjoyed on TV, there is really nothing quite like attending the US Open in person. An overwhelming energy pulses from the large number of outside courts and the celebrity and mystique of the stadium courts is unmatched. Plus, there is a vast collection of food from award-winning chefs, tons of delicious drinks, and plenty of places to get a large variety of merchandise.

In our guide, we’ll give you all the local tips to ensure that you have the best time at the US Open. We’ve been going for years. We know the courts inside and out. We tasted the food this year. We’ve even sampled a few Honey Deuces, so we know how to make sure you get the most out of your 2022 US Open experience.

When is the US Open?

The main draw of the US Open runs until Sunday, September 11th.

What time are the sessions?

When should you go?

Our preference is to go during the first week of the tournament. Since there are so many matches being played on these days, there is constant action on the outside courts, meaning you get the most bang for your buck.

Tickets for these early sessions also tend to be slightly cheaper, starting around $70.

Where should you sit?

These will then prompt you to select a seat at the stadium you’ve chosen. You get a reserved seat in that stadium and then general admission to the other stadiums and the grounds where the outside courts are.

However, here’s the thing, we think that causes you to spend too much money.

Selecting stadium tickets means you’re spending around $200 and up per ticket for Arthur Ashe, $125 and up for Louis Armstrong, or $100 and up for the Grandstand. The only place you’re getting a reserved seat is at the stadium you chose, while the rest of the time you are General Admission.

So unless you plan to spend your entire time sitting in the same seat at that one stadium, you are far better off spending $70 to get General Admission tickets. You can still get access to all of the stadiums, you just won’t get a reserved seat; you will have to sit in whatever seats are open. Considering we believe the best part of the early days is walking around the grounds, this is our preferred way to enjoy the US Open.

How do you get there?

By Car: You can always choose to drive to the US Open, but be prepared to deal with a few parking issues. You can park in two zones near the Billie Jean King Tennis Center, but if the lots are full, you may be directed to park a little bit farther away at Citi Field (provided there is not a Mets game). The walk isn’t bad, but it has been hot in the city lately. Regardless, parking is about $30 so be prepared for that as well.

If you don’t want to deal with parking, you can always use Uber, Lyft, or any other type of rideshare. There is easy pick-up and drop-off that the Tennis Center but that is also about a five-minute walk from the venue.

Subway: The 7 train to Mets-Willets Point will essentially get you right to the Billie Jean King Tennis Center. You’ll have to walk down the boardwalk from the subway to the center, but it’s all right there for you. You can pick up the 7 train at the Court Square station if you’re coming from Brooklyn or from either Times Square or Grand Central if you’re coming from Manhattan.

Rail: If you don’t want to deal with subway transfers and are OK spending a little more money, you can take the Long Island Rail Road (LIRR) from Penn Station or Woodside right to Mets-Willets Point Station. This can sometimes be easier if you’re taking NJ Transit in or coming from out on Long Island, but is, obviously, more expensive than just paying for a subway ride.

What is the best food to eat?

OK, you’re at the US Open. You’re walking the grounds and enjoying a wonderful day of tennis, but now you’re ravenous. What should you eat? Good news for you, we went to the 2022 US Open Food Tasting Preview to sample all of the food being offered at this year’s Open so that we could give you the best recommendations.

The Billie Jean King Tennis Center features a mixture of restaurants, like chef Alex Guarnaschelli’s Fare or chef David Burke’s Mojito, as well as tons of concession offerings in the US Open Food Village that are still prepared by award-winning chefs. You’re not getting basic stadium burgers and fries here.

So what were the best things we ate? What do you need to eat at the US Open? (We also did a whole TikTok series reviewing the food so check it out). What should you drink?

The official drink of the US Open is the Honey Deuce, which is Grey Goose vodka, Chambord raspberry liqueur, fresh lemonade, and three melon balls meant to look like tennis balls. You can choose to order them frozen or on the rocks (although a bartender told us the frozen ones are stronger).

The US Open also offers Lavazza coffee in both espresso and Cold Brew form, so you can stay alert throughout the day, and Poke Yachty sells a Pineapple Green Tea that is refreshing for people who want a little caffeine without going full-on cold brew.

The truth is that there’s really no bad way to enjoy the US Open. It’s one of the most exciting sporting events around, and we get to enjoy it in our own backyard of New York City. With same-day tickets readily available, it’s never too late to decide to take the day off of work, head to the night session once the work day is over, or spend a weekend with the family at the Billie Jean King Tennis Center.

We will have you covered every day of the tournament with the key games to watch and our best bets if you choose to gamble on the event, so make sure you head back to amNY every morning to keep up with the 2022 US Open.