Brooklyn robbers steal man’s dog after he couldn’t provide them with money: NYPD 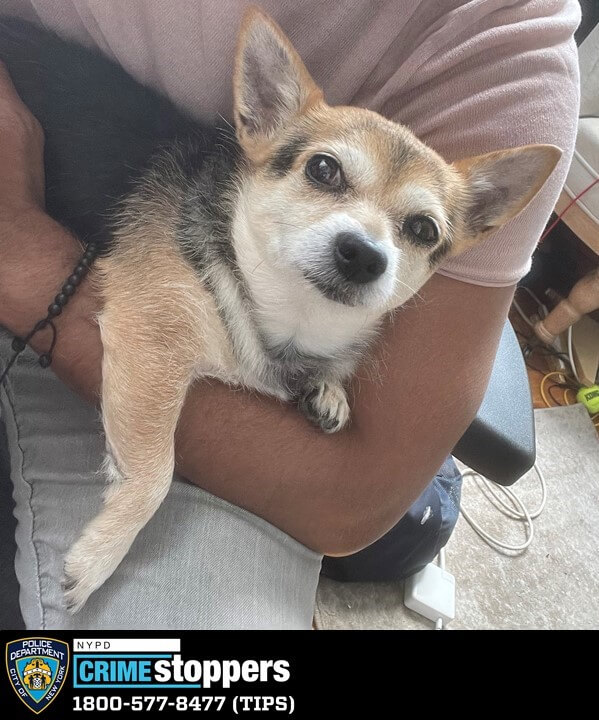 Mango, 12, was stolen from his owner in East Williamsburg, Brooklyn on Aug. 10, 2022.
Photo courtesy of NYPD

When a 29-year-old man told them he had no money, police said, three Brooklyn robbers took something even more valuable from him than cash: his best friend.

The NYPD needs the public’s help in finding a trio of thieves who stole a 29-year-old man’s dog during a robbery on an East Williamsburg street earlier this week.

Law enforcement sources said the incident happened at about 7:15 p.m. on Aug. 10 as the victim was out walking his 12-year-old female Chihuahua/Terrier mix named Mango in front of 100 White St.

But the victim said he had no money on him — leading the three individuals to instead forcibly take Mango and flee the scene, according to police.

The three suspects were last seen heading into a building within the Borinquen Houses complex, at 120 Humboldt St., about three blocks west from the crime scene.

The incident was reported to the 90th Precinct. Police said the victim suffered lacerations to his back, right knee and left arm from the tackle. EMS treated him at the scene for his injuries.

On Friday night, the NYPD released images and video of the three suspects responsible for stealing Mango, along with a photo of the missing mutt.

Anyone with information regarding the robbery or Mango’s whereabouts can call Crime Stoppers at 800-577-TIPS (for Spanish, dial 888-57-PISTA). You can also submit tips online at crimestoppers.nypdonline.org, or on Twitter @NYPDTips. All calls and messages are kept confidential.