By Robert Pozarycki Posted on November 24, 2020 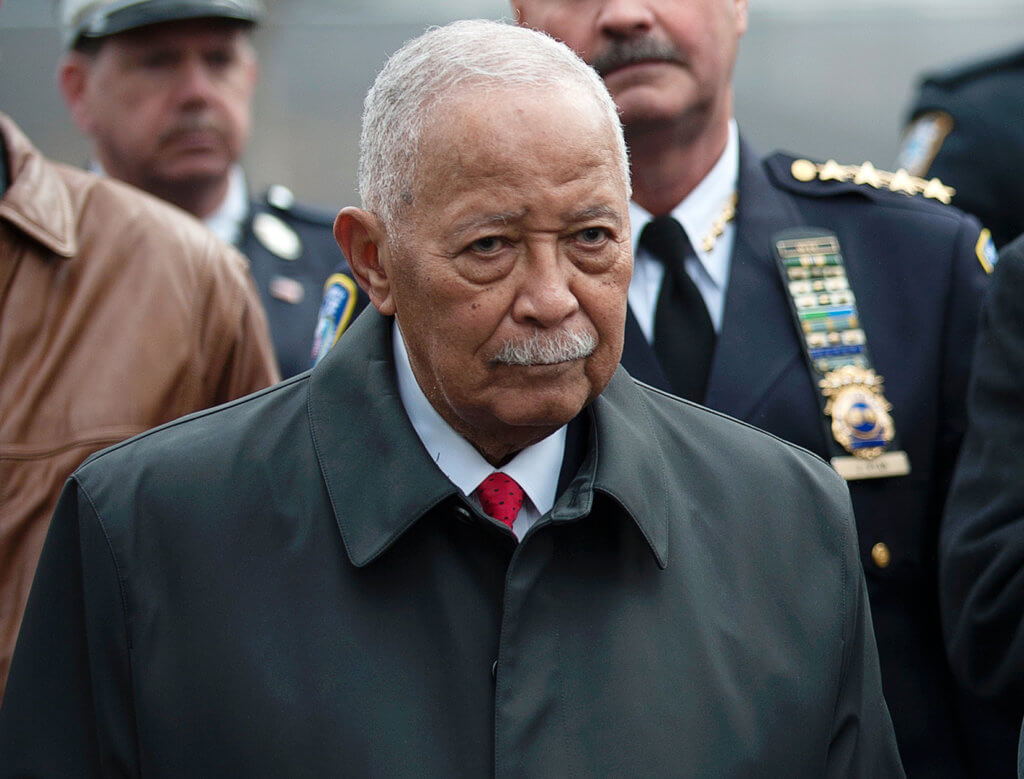 Former Mayor David Dinkins, the first Black man ever to serve the highest executive office in New York City, died on Monday night at the age of 93, according to several published reports.

NBC New York reported that Dinkins was found unconscious and unresponsive on Nov. 23 by home health aides in his Lenox Hill apartment. He apparently died of natural causes.

Dinkins was elected mayor in 1989 after defeating then three-term incumbent Mayor Ed Koch in the Democratic primary, and besting then-U.S. Attorney Rudy Giuliani that November.

The next four years would be among the toughest in city history. Dinkins often referred to New York as the “beautiful mosaic,” and labored to end long-simmering racial tension throughout the city. He championed equality, and welcomed Nelson Mandela to New York in 1990, just weeks after the South African civil rights icon had been released from prison.

Yet the racial tension never fully faded, and Dinkins struggled to heal the wounds reopened following the Crown Heights riots of 1991.

Dinkins also led the response to the first terrorist attack on the World Trade Center in February 1993, when evildoers ignited a giant bomb in the underground parking garage of the Twin Towers, killing six people and injuring hundreds.

The crack-cocaine epidemic in New York also led to a peak of more than 2,000 homicides in 1990, and Dinkins worked closely with the NYPD to turn crime around. Though his reforms led to modest reductions in felonies, it wasn’t enough to shake the city’s crime-riddled reputation.

As a result, Giuliani came back in 1993 to defeat Dinkins in the general election and deny him a second term in office. Yet history would prove kinder to Dinkins, as some of the programs born during his brief tenure at City Hall spurred the city’s comeback in the years that followed.

Dinkins helped lead a cleanup of Times Square and lure the Walt Disney Corporation to invest in the Theater District, turning the notorious red light district into a family-friendly tourism and entertainment mecca. His administration also oversaw reinvestment in the housing stock of long-ignored areas such as Harlem and the South Bronx.

A huge tennis fan, one of Dinkins’ prime achievements in office was approving the construction of Arthur Ashe Stadium at the National Tennis Center in Queens’ Flushing Meadows Corona Park. The deal kept the annual US Open tournament in New York, and the city reaps hundreds of millions of dollars every year from the two-week competition.

It would take Democrats another 20 years before recapturing Gracie Mansion with Bill de Blasio’s triumph in 2013. De Blasio had campaigned for Dinkins in 1989, and would serve as a City Hall aide the following year.

De Blasio remembered Dinkins as a personal mentor who “simply set this city on a better path.”

“He was my mentor, he was my friend, and his steadfast commitment to fight for that “gorgeous mosaic” inspires me every single day,” de Blasio tweeted on Tuesday morning. “We’ll keep up his fight.”

Born in 1927 in Trenton, New Jersey, Dinkins briefly moved with his family to Harlem as a child, but they ultimately wound up moving back to Trenton. He later served in the Marine Corps following his high school graduation in 1945, and would later go on to get his degree from Howard University in Washington in 1950.

Dinkins came back to New York and graduated Brooklyn Law School in 1956. Over the next two decades, he became active in politics in his home neighborhood of Harlem and joined a group of four influential Black politicians including Percy Sutton, Basil Paterson and Charlie Rangel, then known as the “Gang of Four.”

Sutton and Dinkins also co-founded Inner City Broadcasting, which purchased WBLS radio and was one of the first American broadcasting corporations entirely owned by African Americans.

Dinkins would later serve as president of the city’s Board of Elections between 1972 and 1973, and as the New York City clerk between 1975 and 1985. That year, he was elected as Manhattan borough president.

The former mayor was preceded in death by his wife of 67 years, Joyce, who died just last month.