Note: if you purchase something through one of our affiliate links, Schneps Media may earn a commission.
Wade Bowman
comments
Posted on September 16, 2022 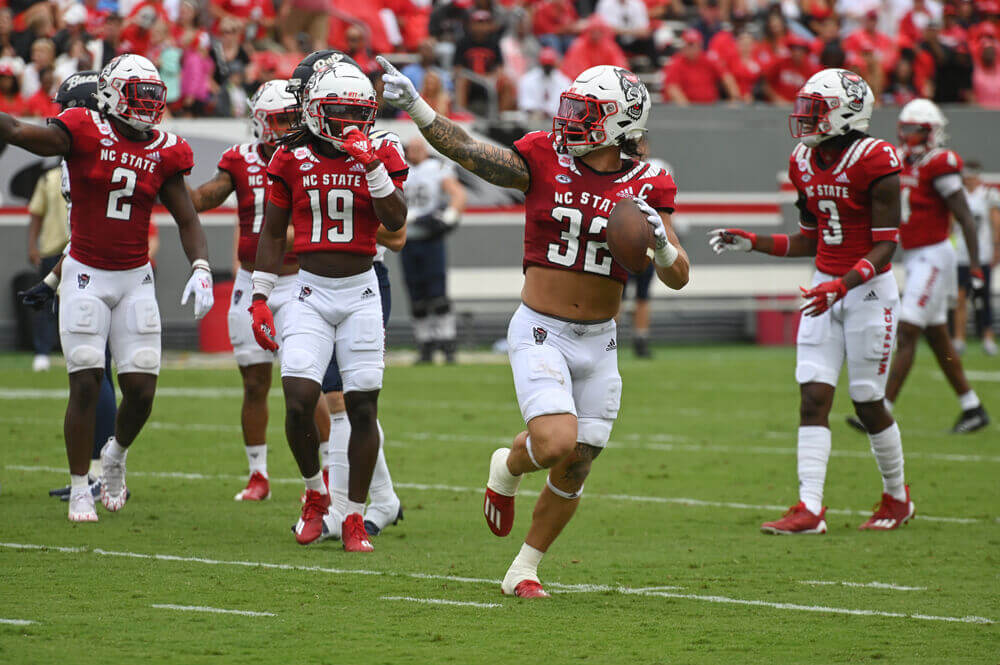 Junior linebacker Drake Thomas claims to have made a fumble recovery during the Wolfpack’s home football game against the Charleston Southern Buccaneers at Carter-Finley Stadium on Saturday, Sept. 10, 2022. The Wolfpack beat the Buccaneers 55-3 (Technician’s Griffin Bryant)

Football season is heating up with the NFL getting started this week and college football continuing. We’ll get you caught up on some of the big college football matchups around the nation in Week 3.

Week three poses N.C. State football’s toughest test yet with a matchup against Texas Tech looming on the horizon. Both programs are coming off highlight performances in their second games of the year and look to carry on their respective hot streaks. Aside from the adversity a foe like the Red Raiders can bring any given week, the Wolfpack is also fighting to stray from the course of history it has against nonconference Power Five teams.

Since its last victory of such distinction in 2003, N.C. State has fallen to 0-7 in nonconference Power Five matchups including some wildly disappointing performances on the road. One that immediately comes to mind for Wolfpack fans is last year’s embarrassing 24-10 road loss against Mississippi State that set the precedent for N.C. State’s consistently poor outings in hostile environments during 2021.

Which team did N.C. State take down in 2003 in its last nonconference Power Five victory? None other than the Red Raiders. Historically, N.C. State has always held the edge against Texas Tech with an all-time record of 4-1 against the program. Having not dropped a game to the Red Raiders since 1952, the Wolfpack hopes to keep its four-game win streak alive in the head-to-head on Saturday.

A lot of things have changed for both programs since the last meeting between the two, however. The Texas Tech of today is coming off a 33-30 2OT win against then No. 25 Houston that saw Red Raiders quarterback Donovan Smith fill into the starting role comfortably. Serving as a dual threat under center, Smith’s 351 yards through the air and 20 attempts rushing should concern a Wolfpack defense that has struggled against mobile signal-callers in recent years.

Taking over for an injured Tyler Shough, Smith’s performance in week two was just enough to take down a top-25 team in the nation, and the sophomore hopes to repeat that success against No. 16 N.C. State.

Where Smith’s game did see a significant area of concern is in the turnover department, tossing three interceptions against Houston last week. N.C. State comes into the weekend ranked 23rd in turnover margin against FBS teams and Wolfpack defensive backs Tyler Baker-Williams and Shyheim Battle look to pump those numbers up if Smith makes any questionable decisions out of the pocket.

As a fringe top-25 team that received 17 votes to be ranked in this week’s AP Poll, Texas Tech possesses all the necessary firepower to knock the Wolfpack off its pedestal. Still suffering from concerns about the legitimacy of its talent after barely escaping Greenville, NC with a win in week one, N.C. State has a golden opportunity to prove itself against a Power Five program but a win won’t come easy.

Week one saw one of Leary’s worst performances as N.C. State’s starting signal caller, but things went right back to normal against Charleston Southern in the Pack’s last outing. Tying N.C. State’s program record for touchdowns accounted for in a single game, Leary went for four touchdowns through the air and two on the ground in week two’s 55-3 dismantling of the Bucs. Having found his footing, Leary seems to have returned to form at the perfect time.

Carter was expected to be Leary’s go-to wideout this season and week three serves as the truest test of whether he can live up to the hype. Serving as the second option to Emeka Emezie last year, Carter found success in stretching the field and dominating as a jump-ball threat. In a game where N.C. State will be forced to keep pace with Texas Tech’s high offensive volume, Carter will need to prove his reliability to Leary if he hopes to develop a rapport heading into conference play.

Tyler Shough got the nod as the starter to begin the year, but an injury has forced Smith into the limelight where he’s delivered thus far. Playing a massive role in the Red Raiders’ upset over then No. 25 Houston, Smith’s ability as a passer and running threat make him the perfect weapon to combat N.C. State’s defense.