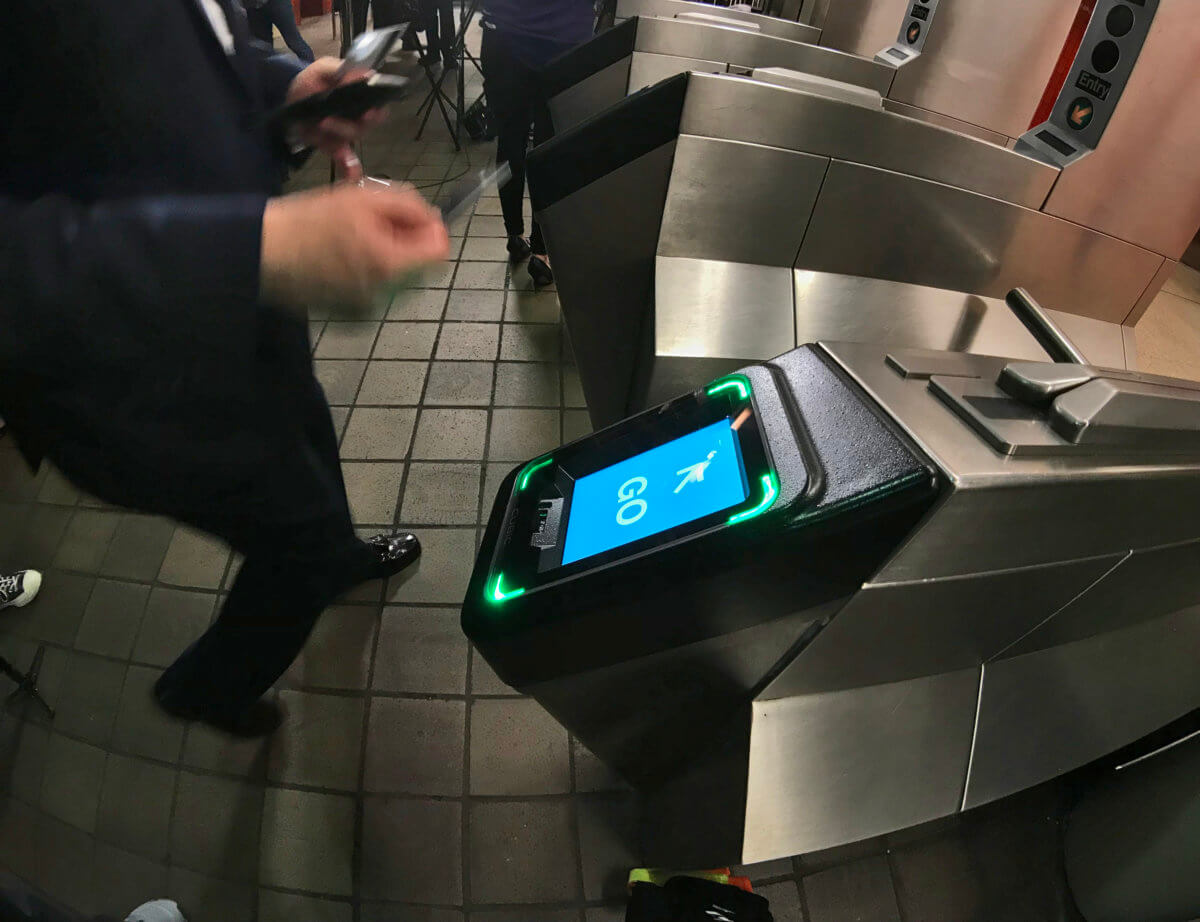 Some of OMNY’s first turnstiles at Bowling Green.
Marc A. Hermann / MTA

“We’ve come a long way from the first tap in 2019,” said MTA New York City Transit’s acting senior vice president Demetrius Crichlow at Tuesday’s press conference inside Fulton Center in Lower Manhattan. “This is an important moment for New York City. Now that the restrictions have been lifted and things are slowly but surely getting more and more back to normalcy, we’re going to have a summer to remember.”

The agency finished installing more than 15,000 OMNY readers across all of the city’s 472 subway stations and 5,800 buses back in December 2020, and officials have clocked daily averages of around 600,000 taps — almost seven taps a second.

Nearly 16% of all fare payments are now through OMNY, which so far can be done via smartphone or bank cards.

Employee commuter benefit services like TransitChek are now also starting to mail out contactless cards which riders can use to tap-and-go their way through the turnstiles and onto buses, according to Sarah Meyer, MTA’s chief customer officer.

Meyer said commutes will speed up because straphangers no longer have to wait on lines for vending machines or get stuck at a temperamental turnstile giving the dreaded “please swipe again” message.

“It’s becoming faster and easier for everyone to take the train,” Meyer said. “We’re really excited to be able to be speeding up everybody’s commutes.”

Average OMNY tap time is half a second, compared to the much slower 4 seconds it takes on average to insert a MetroCard into a reader on board buses, according to MTA spokesman Aaron Donovan.

The payment system launched in 2019 on the Lexington Avenue Line — which carries the 4, 5, and 6 trains — and Staten Island buses.

MTA plans to introduce its own OMNY cards later this year, selling them first through private retail businesses before installing OMNY vending machines at stations some time afterward.

The agency wants to phase out MetroCards by 2023, and one transit guru urged straphangers to get to know the new payment system.

“In 2023 the MetroCard will be gone — and that’s only two short years away,” said MTA’s director for fare payment programs Wayne Lydon. “So if you haven’t tried using OMNY, now is a good time to start.”

The yellow plastic cards were first introduced in 1993 to replace the old subway tokens, which weren’t officially discontinued until 2003.

Now that OMNY readers have been installed throughout the system, transit advocates have called on the MTA to allow all-door boarding on their local buses, where the readers at the back door are currently deactivated, forcing bus riders to board through the front door only. The activists said that activating both doors could cut the time buses wait for people to get on in half.

The MTA originally promised to implement all-door boarding at the same time of the OMNY roll-out as part of its Fast Forward plan under previous New York City Transit Chief and “Train Daddy” Andy Byford.

But Authority bigs fear that riders might evade the fares by getting on at the back, where there is no bus driver to make sure they’ve paid their ticket, and the agency won’t allow for all-door entry until they have a way to check that everybody on board paid their $2.75.

“Right now we need to establish a proof of payment system, that is available on OMNY but isn’t available on MetroCard,” Meyer said. “Until we have that, we can’t launch all-door boarding and ensure that we’re being fair and equitable to all of our customers.”

The transit reps wouldn’t say when that might happen, with Lydon hinting it would be some time in “the near future” versus Meyer saying the move would come shortly after the end of the MetroCard era in 2023.

“Once the MetroCard is phased out, then I would assume that all-door boarding will come shortly soon,” Meyer said.