Where to find regional pizza styles in NYC, Chicago and Detroit included 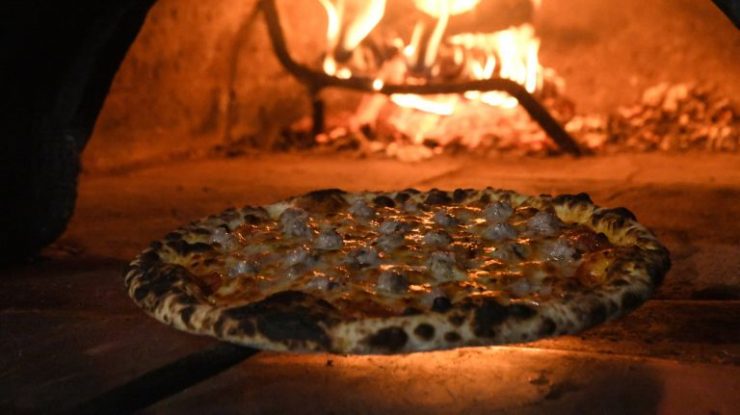 Get to the bottom of the fierce pizza debates — Chicago or Detroit? Neapolitan or St. Louis? — right here in the five boroughs.

New York is a pizza town, and the people who live here just can’t get enough. The options accommodate that.

It’s cheap, it’s delicious, and with so many styles to choose from, there’s a slice to remind everyone of home, says Ken Forkish, author of “The Elements of Pizza” and owner of Ken’s Artisan Pizza and Bakery in Portland, Oregon.

“There’s something about pizza that hits that emotional spot — it just makes you happy,” Forkish says. “Who is really analytic about pizza? The pizza most people love is pretty close to the pizza they grew up eating.”

That means that even if you’re not “from around here,” you’ll be able to find the place that hits the spot.

“Pizza is one of those foods that can be pretty different from place to place, and it means pizza makers feel license to make pizza in the style they grew up with or that they had somewhere in their travels,” he says. “Before, the common thinking was if you don’t make pizza in one particular way, I might sneer at it a little bit, but there’s a lot more respect now for pizzas made in different styles.”

If you’re in need of a cure for homesickness, here are six regional pizzas you can find right in NYC — no plane tickets required.

Neapolitan pizza is the OG of pizza and has influenced pizza styles over the past 100-plus years, Forkish says.

“That’s where pizza was born: Originally, it was a poor person’s food using local ingredients that were inexpensive,” he says.

A true Neapolitan pizza is baked in a wood-fired oven at a high heat of 900 degrees Fahrenheit. The single-serving pies have a soft crust and are topped with simple ingredients: tomato sauce made from just tomatoes and salt, and fresh mozzarella cheese.

“Whenever you have some chefy, creative combination, I don’t really care about that. If you can’t make a really great cheese pizza, what’s the point of putting everything else on top to hide it?” Forkish says.

True Neapolitan pizza can be found at Kesté, with locations in Manhattan. Chef Roberto Caporuscio was born and raised in Italy, and studied pizza-making in Naples before bringing the signature style to NYC.

If you’re from St. Louis, Forkish says a slice of St. Louis-style pizza transports these Midwestern transplants right back home.

“They use very specific cheese — it’s a processed cheese and it has a melt and flavor that if you’re from St. Louis, it’s like mother’s milk,” he says.

These pies have a cracker-thin crust topped with that St. Louis specialty: Provel cheese, a mix of Swiss, cheddar and provolone. Speedy Romeo, in Brooklyn and the Lower East Side, “imports” their Provel straight from the Midwest, and uses it on their St. Louie Pie, topped with sauce, pepperoni and pickled chilies.

While the debate rages on as to whether Chicago-style pizza is actually pizza, Forkish says he’s staying out of it.

“I don’t dislike Chicago pizza. But to me it’s in a class of its own, more like a savory pie than a pizza,” he says. “I avoided the subject altogether in my book because I knew I’d just piss people off.”

One guy who doesn’t seem to care about the often unpopular opinions over this controversial pie is Emmett Burke, the owner of his namesake joint, Emmett’s. Burke turns out deep dish pies with thick layers of cheese, sauce and toppings, and his SoHo spot has attracted hordes of New Yorkers and Chicagoans alike, willing to put their differences aside and wait up to two hours for a piece of this deep dish delight.

Forkish says Detroit-style is modeled after one place alone.

"What people think of as Detroit-style pizza is mostly pizza that’s made in the style of a place called Buddy’s — it’s a pan pizza that has a high rim, and cheese is applied all the way around so the cheese bakes around and down the side,” he says.

One place to find these cheesy pies in the five boroughs is Emmy Squared, the second outpost (after Emily) of husband and wife team Matt and Emily Hyland. They’ve been serving their thick-crust square slices with innovative toppings like pickled jalapeños or Sichuan pea shoot salad since 2016.

“We wanted our new spot to have its own unique slant, so we based the pizza at Emmy Squared on our favorite type of pizza to eat at home — square pizza, cooked in a pan for that cheesy, crispy edge and airy middle,” Emily told amNewYork.

If you’re a true Sicilian looking for a taste of home, you won’t find it in New York, Forkish says. The typical Sicilian slice actually has little to do with what you’d find in Italy.

“If you go to Sicily, you’ll find flatbreads at bakeries but it doesn’t resemble a Sicilian slice in New York, where you expect it to be a square slice that’s got a little bit of sponginess to it,” Forkish says. “People take liberties with words — you have a pizzeria, you make a pan pizza, but there’s no agreed-upon definition of what Sicilian is,” he says.

But in New York, these square slices share space at most slice joints in NYC. Mama’s Too on the Upper West Side has a pizza case filled with Sicilian-style options, including a cacio pepe slice, and classic cheese and pepperoni.

You probably don’t even have to leave your neighborhood to snag a New York-style slice, and it’s the quintessential New York food, Forkish says.

“Pizza in New York started out in Italian bakeries in the late 1800s, and you could have it as a snack. The slice came from kids going to the bakery after school, but as pizza styles changed, eating habits didn’t,” he says.

Pizza makers made some adjustments to the traditional Neapolitan recipe: They used low-moisture mozzarella, which had a longer shelf life than fresh mozzarella. They’re also baked in gas ovens at a much lower heat, resulting in a crispier crust and gooier slice.

Joe’s Pizza in the West Village has been doling out cheesy slices since 1975, and original owner Joe Pozzuoli is still serving customers waiting in long lines down Carmine Street, eager for a taste of New York. Or head to one of the three other Manhattan locations, or the Williamsburg outpost.)

“The New Haven-style came from people that were from Naples — they were Italians who had immigrated to the U.S. for a better life, who were adapting to their homeland,” he says. “They didn’t have wood-fired ovens like they had in Italy, but they could buy bread ovens. They’d make pizza to cool the hearth to make bread.”

Now, it’s a style all its own, with a thin crust, topped with pecorino cheese instead of traditional mozzarella.

While New Haven is known for its signature white clam pies, trek to Reggiano’s Brick Oven Pizza in Staten Island for their thin-crusted version, a stiff competition to their Metro North-adjacent neighbors.