By Meaghan McGoldrick Posted on April 3, 2020 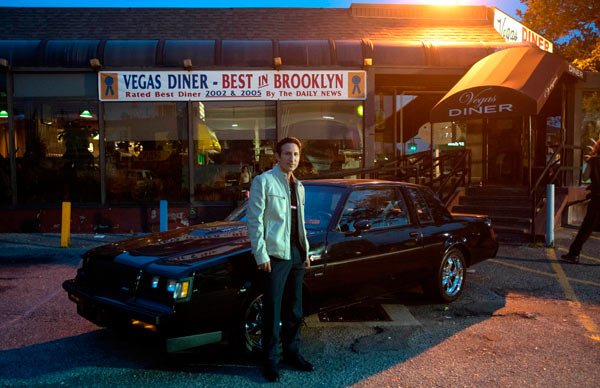 After years in production, the first four episodes of “Gravesend” — a 1980s mob series set in the Brooklyn neighborhood — finally got it made with a digital debut.

Formerly known as “The Neighborhood,” the new series dropped on Amazon Prime at midnight Thursday. “Gravesend” is the brainchild of Gravesend native William DeMeo, the series centers around mob “soldier” Benny Zerletta (DeMeo), as he grapples with leaving behind a life of crime.

Constantly challenged by his mother’s dying wish for him to seek guidance from above, Zerletta must find himself — while managing to not get himself killed.

The show, in production since at least 2017, filmed the bulk of its first season in the ‘hoods where DeMeo grew up.

“You’ve got Lenny’s Pizza, L&B, John’s Deli, Joe’s Bar on Avenue U, Our Lady of Grace Church — which is my parish — and the list goes on,” said DeMeo, who doubles as the show’s lead actor and director. The crew even made sure to shoot at the now-shuttered Vegas Diner, before it closed for good.

“It’s so Brooklyn,” DeMeo said — down to the series’ theme song, created specifically for the show by fellow southern Brooklyn native Michael McLeer. McLeer, also known as Kaves, is a founding member of the musical group Lordz of Brooklyn.

The actor, best known for roles in films like “Gotti” and “Back in the Day,” said the new series will mirror a different notch in his belt. “What the Sopranos did for New Jersey, that’s what this show is for Brooklyn,” said DeMeo, who played Jason Molinaro on the hit HBO series from 2004 to 2007.

This isn’t the first time DeMeo has paid homage to his hometown. In 2016, he directed his first documentary film, “Cruisin 86th St.,” which focused on southern Brooklyn in the ’70s, ’80s and early ’90s.

In 2019, he brought his “Gotti” co-star John Travolta back to Lenny’s — the Bensonhurst pizza place that, like Travolta, had a starring role in the 1977 classic “Saturday Night Fever.”

But DeMeo considers “Gravesend” one of his best works. “This is all independently made,” he said, “and it’s as good as what’s on television — it’s network-ready. That’s why it’s on Amazon Prime.”

And he hopes to expand upon the first four episodes.

“As is, it’s kind of like a mini-series,” DeMeo said. “But the goal is to do more episodes — and I need the support of Brooklyn to do that. I need Brooklyn to spread love the Brooklyn way so that we can keep going.”

The first four episodes of “Gravesend” are now available to stream — and DeMeo says it couldn’t have come at a better time for Brooklynites who are stuck inside, looking for a distraction amid the coronavirus outbreak.

“I think this series will make people feel good, you know, whether you’ve moved away from Brooklyn or you’re still here and just longing for that simpler time,” he said, “like when you sat on your stoop with your friends or when you cruised in the car down 86th Street.”