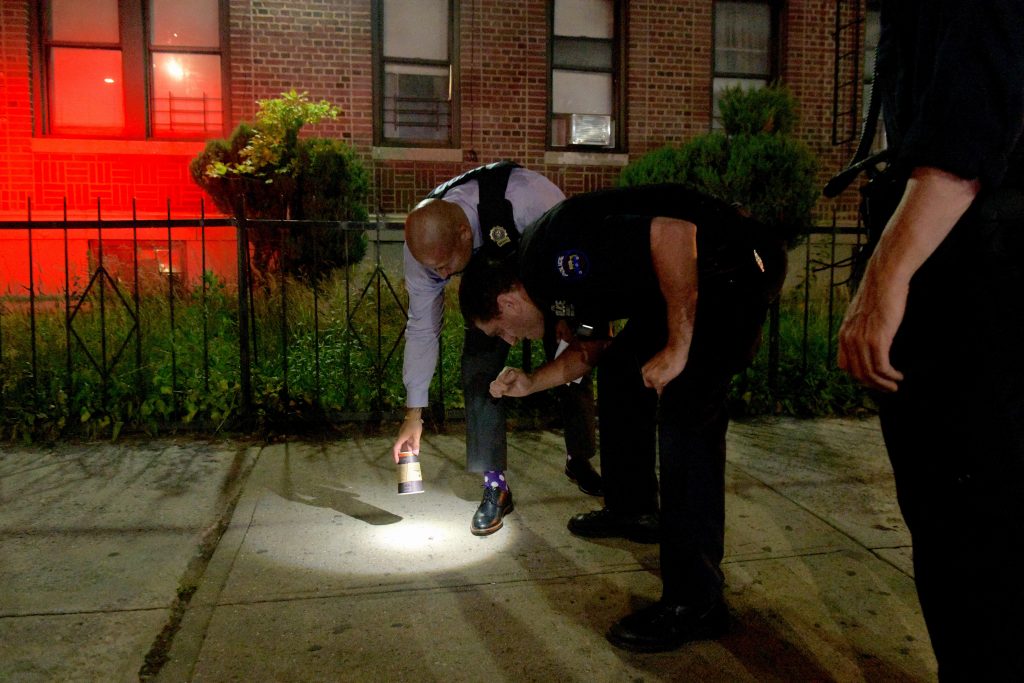 Cops look for bullet shells while responding to a shooting in Brooklyn on July 8, 2020. (Photo by Todd Maisel)

Hoping to stop the spread of rampant gun violence across Brooklyn, federal agents teamed up with the NYPD to bust 10 individuals over a two-day period for illegally carrying firearms, prosecutors announced Thursday.

The ten arrested individuals now face federal gun possession charges that carry a maximum penalty of 10 years behind bars upon conviction. All of them, according to acting U.S. Attorney for the Eastern District of New York Seth DuCharme, are repeat offenders — they had each been previously convicted of a crime punishable by at least a year in prison.

The operation was carried out Aug. 4 and 6 in Brooklyn as part of the U.S. Justice Department’s Project Safe Neighborhoods. Federal agents with the FBI-NYPD New York Metro Safe Streets Task Force worked with the NYPD and the state Department of Parole to investigate, indict and arrest the suspects.

In several instances, the perpetrators were found to have guns after police stopped them for traffic infractions. One man had been involved in an alleged drunk driving crash.

“The one tried and true way to reduce the rapid spike in gun violence we’ve experienced in Brooklyn this summer is to take the guns out of the hands of repeat offenders and take those offenders off of our streets,” DuCharme said.

Shootings and gun violence have surged across New York City, and particularly in Brooklyn, during the summer. The NYPD reported that shootings surged by 177% during the month of July. Gun-related homicides are also up.

The suspects arrested through the Project Safe Neighborhoods operation on Aug. 4 and 6 are as follows:

• Dashawn Andrews, 29, was picked up Aug. 6 on an indictment charging him with possessing a Taurus model PT-22 .22-caliber pistol and ammunition near the corner of Livonia and Pennsylvania Avenues in East New York.

• Paolo Alfaro Barber, 29, was collared on Aug. 6 after police officers spotted him allegedly carrying a bag with an L-shaped bulge in front of an apartment building on Newkirk Avenue near East 25th Street in Flatbush. The bag was found to contain a Taurus .38-caliber revolver loaded with six rounds.

• Terrence Brown, 24, was indicted on Aug. 6 after state parole officers and NYPD members searched his apartment in the Van Dyke Houses on Blake Avenue in Brownsville and found a Taurus PT 111, 9 mm pistol inside.

• Jahquel Giddeon, 20, was indicted on Aug. 6 after parole officers searched his Rockaway Parkway apartment in Canarsie and found a loaded Ruger 380 semi-automatic pistol under a mattress.

• Mayce McCall, 27, of the Bronx was indicted on Aug. 6 after cops allegedly found in his possession a Taurus Model 85, .38-caliber revolver during a traffic stop on Sutter Avenue in East New York. Prosecutors said NYPD officers initially stopped the Range Rover that a driver with McCall operated after observing it heading the wrong way down a one-way street.

• Tony McQueen, 32, was picked up on Aug. 6 after being spotted passed out and drunk behind the wheel of a vehicle parked at the corner of Atlantic Avenue and Thomas S. Boyland Street in Brownsville. During a search, cops found inside the vehicle a Smith & Wesson Model M&P 9C caliber, 9 mm pistol with 13 rounds.

• Avery Millington, 25, was indicted for gun possession on Aug. 6 after cops found a gun during a traffic stop on Bristol Street near Newport Avenue in Brownsville. Prosecutors said officers observed Millington behind the wheel of a Hyundai traveling the wrong way down a one-way street. Upon stopping him, they found a Charter Arms Undercover .38 special pistol with five rounds allegedly in his possession.

• Keenen Nurse, 29, was picked up on Aug. 4 after cops found a Jimenez Arms .380-caliber semi-automatic pistol hidden under a stairwell inside an apartment building on Eastern Parkway. Nurse was picked up after an investigation found his DNA on the weapon.

• Marvin Pickett, 38, was arrested on Aug. 6 after he was involved in an alleged drunk driving crash involving a CitiBike stand at the corner of Nassau and Navy Streets in Downtown Brooklyn back on March 28. He was found to be in possession of a Taurus .380-caliber pistol.

• Aaron Swaby, 27, was indicted on Aug. 6 after cops previously stopped him for a traffic infraction along Surf Avenue in Coney Island and found inside his vehicle a Smith & Wesson Model SD40VE .40-caliber semi-automatic pistol.