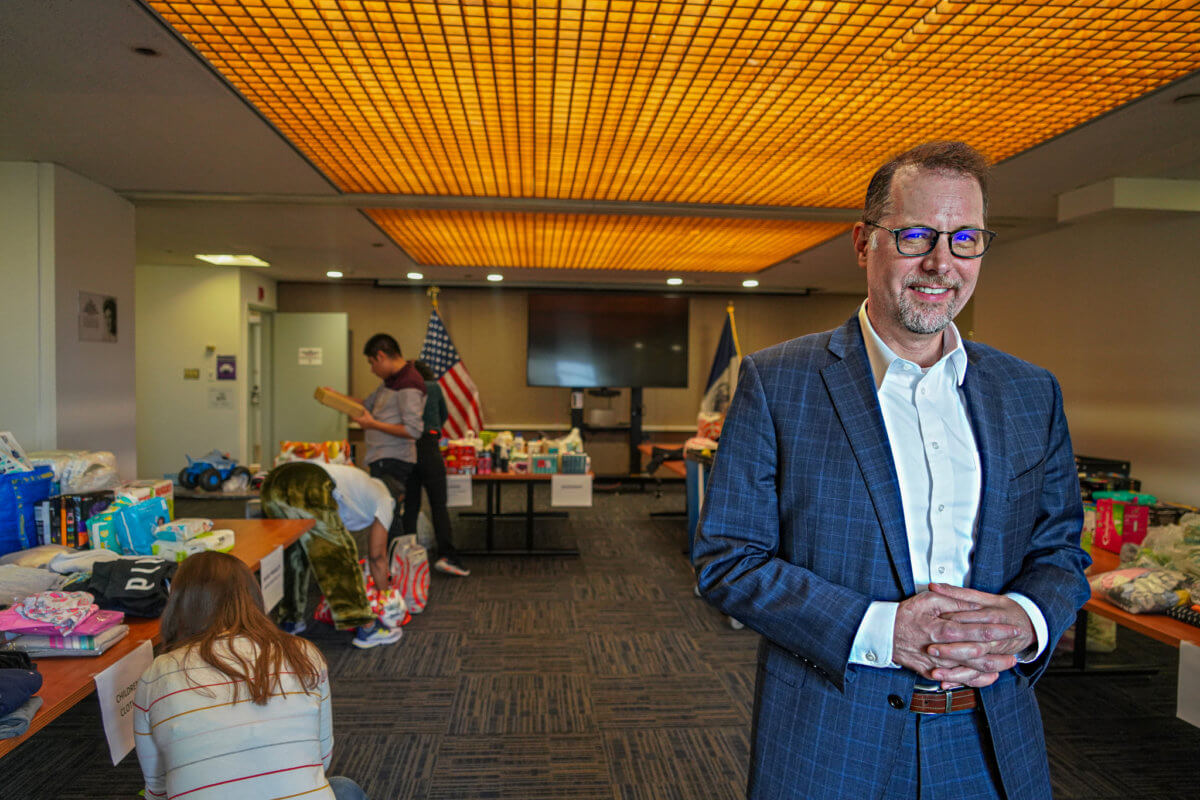 Manhattan Borough President Mark Levine has been collecting necessities for the past month to aid migrants with the help of fellow New Yorkers.
Photo by Dean Moses

Manhattan Borough President Mark Levine has been collecting necessities for the past month to aid migrants with the help of fellow New Yorkers.

Levine spent much of his Oct. 17 inside his 1 Centre St. office, helping his staff sort through stacks of donations such as clothing, toothpaste, and feminine supplies. The borough president launched the initiative in September to help aid the newest New Yorkers with essentials.

“They often arrive with almost nothing other than what they’re wearing and maybe a small bag of possessions. So, we have been rallying Manhattanites and New Yorkers to help out by contributing what they can–toiletries, basic clothing, items, socks, baby care,” Levine told amNewYork Metro. “The response has just been so overwhelming. We’ve been collecting here at our Downtown office, also at our Uptown office. People come in every single day. We’ve had school groups, we’ve had neighborhood associations, and just individual New Yorkers contributing selflessly to help out.”

Levine knows all too well the way in which the tired, huddled masses arrive at Port Authority. Tagged at the Texas border like cattle, the migrants are shipped to New York City often with nothing on their feet but worn flip-flops.

Levine has regularly greeted the men, women and children who pour off the buses and has called on the federal government to financially support the Big Apple as services are stretched thin.

“It’s very incredibly moving to spend time with some of the families. Actually, this weekend, I was able to spend time at a job training program, where many of the young adults amongst recent arrivals are training to work in construction and it’s such a will to work and will contribute to the economy,” Levine said. “In the meantime, they’re really struggling. And we need to help them, and we need the federal government to help New York. We need resources to do this right, to help cover the cost of housing and food.”

The borough president said that he has been moved by the generosity of his constituents who he believes have gone above and beyond, even donating toys for arriving children. Yet with the colder weather coming he also explained that his office is pivoting, asking New Yorkers to donate winter clothing as many migrants hail from warmer climates and may be unprepared for the harsh weather.

“We’re also transitioning now as the weather gets colder to ask for New Yorkers who can contribute to focus on winter clothing. Many of the migrants are arriving with really no winter appropriate clothing at all. Often, they’re wearing t-shirts and we want to provide them with heavier clothing and sweatshirts and even coats if we can. So, we’re going to continue to ask for help. And based on their response so far, we are really excited to see continued support from New Yorkers,” Levine explained.

Levine pledged that all clothing and essentials gathered during the drive, which will continue until further notice, will go directly to the asylum seekers in need.

“We are a welcoming city, where people who care and I know we’re heartbroken to see the struggles of migrants arriving here after so much trauma in their home country and on the way here. And so, people appreciate having a way to help out and we’re now collecting every single day from people young and old,” Levine said.

Donations can either be dropped off at 1 Centre St., 19th floor, or in Harlem at 431 West 125th St., during regular business hours.