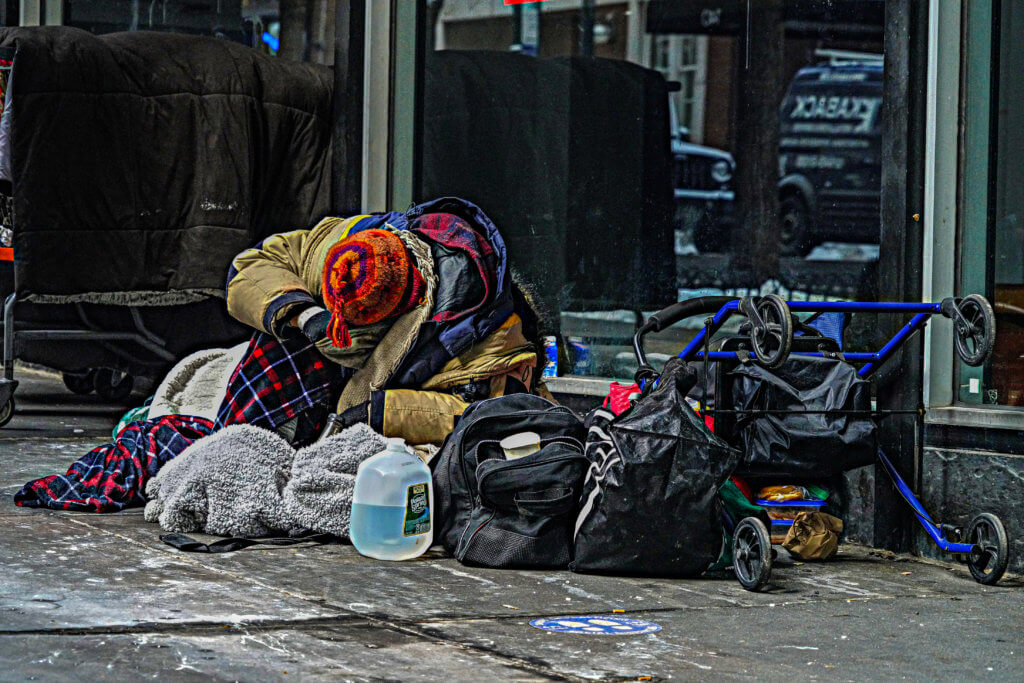 A homeless man sits in midtown
Photo by Dean Moses

After a long campaign, Eric Adams will soon take office as New York City’s new mayor, and just about the only thing we can be sure of is that it won’t be long before his administration will be accused of not doing enough to reduce homelessness. New Yorkers always hold their mayors accountable for New York City’s longstanding housing affordability crisis, but this is hardly fair. Our leaders in Albany have a key role to play, too.

With New York’s new governor, Kathy Hochul, promising “a whole new era of cooperation” between the state and the city, and a progressive Legislature eager to make a dent in the problem, real change could be on the horizon.  This mayor may finally get the State support he needs to end homelessness as we know it.

To give the newly elected Mayor Adams a head start on homelessness and housing, Governor Hochul and the Legislature can take a few important actions in the next few months:

First – before the state legislative session even begins in January – Governor Hochul can make sure the Emergency Rental Assistance Program (ERAP) continues to get desperately needed federal dollars to tenants and landlords adversely affected by the pandemic. Governor Hochul’s leadership has already transformed New York from the slowest state at distributing this critical aid to one of the fastest. Her efforts should be celebrated. But more than 90% of New York’s share of ERAP has now been distributed, two months before the state’s eviction moratorium expires, when the households most likely to become homeless will finally apply for assistance. The Governor must persist, and succeed, in her efforts to get Washington to reallocate ERAP funds unspent by other states to New York, or homelessness could explode in the new mayor’s first few months.

Second, Governor Hochul can immediately sign S6573/A8009 (Kavanagh/Rosenthal) to increase how much rent can be paid by the State’s Family Homelessness Eviction Prevention Supplement (FHEPS), the rental voucher for homeless and at-risk households. An increase in the payment standard of the State’s rental voucher is long overdue, and will align it with the rates the city voucher pays, which were recently increased to match federal voucher rates, to better reflect the true cost of renting in New York City.

Of course, that’s not all the governor can do on rent subsidies. Helping vulnerable families and individuals pay their rent is the single best way to prevent and end homelessness. But Section 8, the federal rent subsidy, reaches only one out of every five poor households who qualify for it.

New York City has responded to this need by creating locally funded vouchers, but the State has repeatedly refused to pay its fair share of the costs. In response, the Legislature has advocated establishing new, State-funded rental vouchers, most recently under the proposed Housing Stability Support (HSS) program and the Housing Access Voucher Program (HAVP). Governor Hochul can demonstrate real partnership with Mayor Adams and fund both of these desperately needed programs on a scale that will significantly reduce homelessness. This will not only help New York City, it will help localities across the state. It is long past time for the State to step up and help to house struggling New Yorkers.

Finally, Governor Hochul can ensure the State lives up to its historic role of caring for our most vulnerable, disabled and homeless residents. She can start by increasing the number of long-term state psychiatric beds made available to individuals suffering mental health crises.

This commitment must be made now, so that production of desperately needed supportive housing units doesn’t slow down. But it will be even more significant if it is incorporated into a new City-State supportive housing agreement with the new mayor (and mayors of big cities all over the state, for that matter). Three previous agreements comprise the most successful affordable housing development initiatives ever, pooling state and city resources to create thousands of affordable apartments for formerly homeless individuals and families supported with on-site services. The unique structure of these agreements ensured the City and the State would hold each other to their individual commitments, and helped the initiatives survive the administrations of five mayors and five governors.

The State has long had responsibility for meeting the housing needs of vulnerable New Yorkers, including individuals with mental illness, families made homeless by domestic violence and the thousands of people being released from State prisons who are now overwhelming the shelter systems in New York City and across the state.  And homelessness has long been an enormous, structural economic and social crisis beyond the ability of localities to address on their own.  But with a Legislature and new governor eager to help, Mayor Adams may just have a chance to make real progress housing homeless New Yorkers.

Ted Houghton is the president of Gateway Housing and former Executive Deputy Commissioner of NYS Homes and Community Renewal.