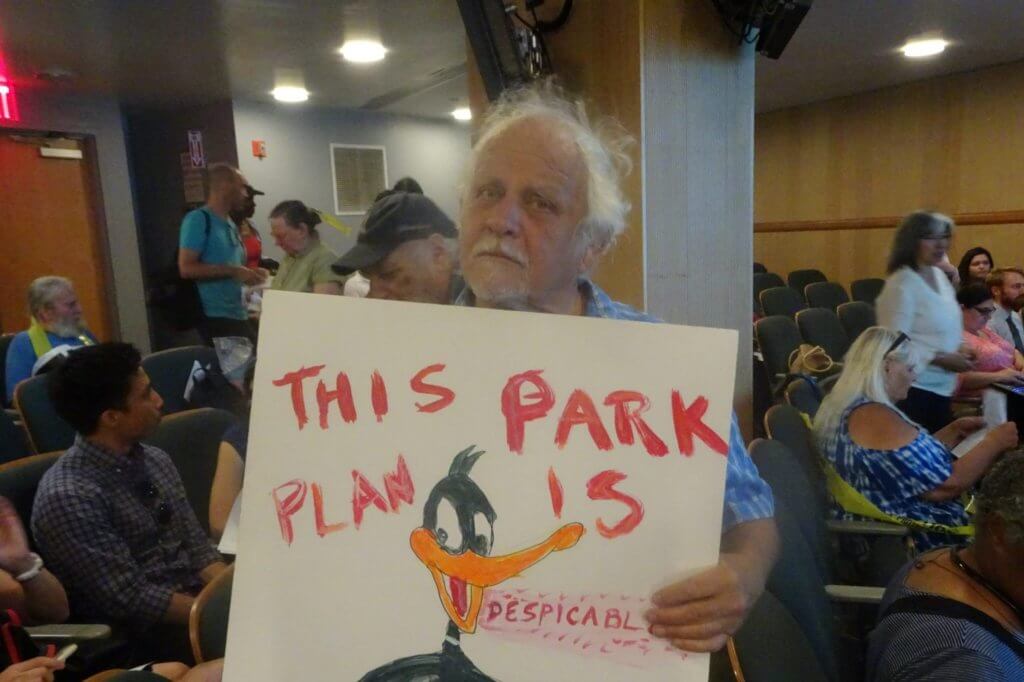 Hearing attendee poses with his sign - Photo by William Engel

The atmosphere was tense at last night’s hearing on the new East Coast Resiliency Project. Those who stood up to testify routinely went over their two-minute limit, ignoring the ending buzzer as they continued to voice their dissatisfaction with the project.

“The construction of this project will cause immense harm to our community,” said Manhattan resident Naomi Schiller. “So we need to ask; is this harm worth it?”

Schiller got her answer moments later, when several audience members interjected with a blunt “No!”

The night began with representatives from the NYC Department of Design and Construction (DDC) summarizing the current plan. As DDC First Deputy Commissioner Jamie Torres Springer explained, the project was conceived in late 2012 after Hurricane Sandy devastated the coastline.

“110,000 residents were subjected to flooding during Hurricane Sandy,” said Springer. “The goal of the project from the beginning has been to provide a reliable solution to flooding, and to do it as soon as possible.”

The project, in its current state, will raise East River Park by eight feet (with the flood protection built underneath) and rebuild the park at that level. This will necessitate the closure of parkland, ball fields and the riverside bike path while the project is under construction.

Currently, the DDC expects to begin the project in March 2020 and finish it in 3/12 years.

Much of the audience’s complaints involved the amount of green space that the project will render inaccessible. Manhattan resident Yvette Mercedes objected to the fact that the plan involves demolishing most of the East River Park before rebuilding it.

“If you have a virus on your computer, it doesn’t mean that you have to erase everything,” said Mercedes. “So what is the point of demolishing the whole park? If they can fix it in phases, why is it that they have to demolish the whole park?”

Furthermore, Others brought up the fact that the plan received a radical overhaul after years of community planning. Last fall, the DDC announced that they were replacing the existing plan with one that would take significantly less time. The catch was that, prior to the overhaul, the East River Park wasn’t going to be slated for demolishment.

“This plan was started with an apology from the commissioner, because they totally blindsided this community, dropping a new plan out of the sky,” said Loeb. “We need an independent group looking at this design. Nobody has looked at this except the Department of Design and Construction. We have no confidence in you.”

Brad Hoylman expressed concerns about the project’s astronomic cost, and was skeptical of the DDC’s claims of a 3 1/2 year completion time.

Still others complained that the project doesn’t address the root causes of climate change; instead, it only alleviates the symptom (rising sea levels).

“We need to ask whether this plan will create climate justice in the long run,” said Naomi Schiller. “Why are we spending $1.5 billion on a project that does not, in even a minimal way, address the causes of climate change? We need to provide protection and tackle the root cause of carbon emissions.”

During the hearing, City Council Member Keith Powers (D-Upper East Side, Carnegie Hill) expressed gratitude that the community was stepping up to provide the DDC with the public input that their plan desperately needed.

“I just want to thank everyone for being here tonight,” said Powers. “This process here tonight is designed to make sure that the community has a voice, and that many of the things I’ve heard from the folks that live in my area are attended to.”