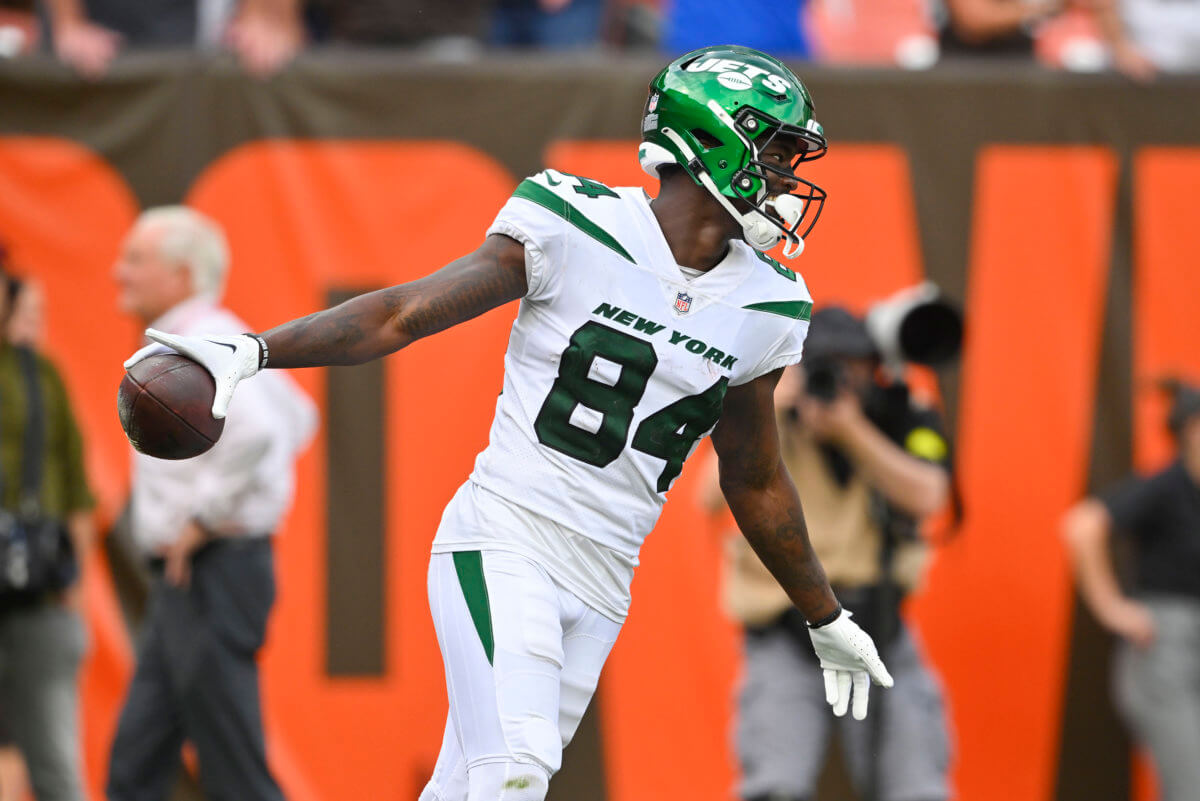 Jets wide receiver Corey Davis celebrates after he made a catch and took it in for a touchdown against the Cleveland Browns.
AP Photo/David Richard

The Jets capped off a magical comeback against the Browns on Sunday, where they secured their first win of the season with a 31–30 victory over Cleveland.

Gang Green found themselves down by 13 points with under two minutes remaining in the contest, but backup quarterback Joe Flacco managed to lead the team back — first, with a 66-yard pass to Corey Davi to bring them within one score, and then a successful onside kick that gave the offense another chance.

Flacco then marched the team down the field, and ultimately completed a 15-yard pass to rookie Garrett Wilson for the win.

Here are three takeaways from the Jets victory on Sunday:

Garrett Wilson, who the Jets selected as the 10th overall pick in 2022 out of Ohio State, made a statement in his second game in the NFL, as he caught a pair of touchdown passes from Flacco, while running rampant against his defensive assignments.

Wilson received for 102 yards on 8 receptions, and managed to bring in two touchdown passes — including the one that brought the Jets to victory on Sunday. He became the first Jets rookie with 100 receiving yards and multiple receiving touchdowns in a game, according to ESPN’s Rich Cimin.

Meanwhile, fellow rookie Breece Hall, the running back that the Jets selected with a second round pick, and made the first running back off the board, preformed solidly on Sunday — recording 50 yards on the ground through 7 carries, and another 10 passing yards, including a crucial touchdown to end the second quarter.

Rookie cornerback Sauce Gardner had a rough day, as he was burned on a number of deep passes from the Browns, but he managed to step up late in the game to halt any momentum Cleveland was looking for.

Flacco shows his worth

Jets starting quarterback Zach Wilson remains sidelined with a torn meniscus and a bone bruise, and head coach Robert Saleh said he won’t be back until Week 4, when Gang Green takes on the Pittsburgh Steelers.

That left Joe Flacco under center for the Jets on Sunday, and the veteran performed as admirably as Jeets fans could have hoped for.

He passed a whopping 44 times, and completed 26 of those passes, but managed to throw four touchdowns in the game.

Most importantly, Flacco led the epic comeback, when the Jets were down double-digits while time expired, and managed to toss a 66-yard score to Corey Davis, before leading a game-winning drive to win with a pass to Wilson over the middle with just 22 seconds left.

Flacco will likely give up his starting role whenever Zach Wilson is healthy enough to start, but he has proved to be a solid option on the depth chart.

Jets defense holds their own

Last week, the Jets defense looked confused about their matchups, and didn’t perform as well as fans had hoped — especially with a defensive-minded coach like Robert Salh at the helm.

This week, the defensive line kept up their dominance, and the secondary feasted against a backup quarterback, Jacoby Brissett.

Brissett was under pressure for a large portion of his drop-backs, and the potent Browns running game was stifled on several crucial occasions. Led by Nick Chubb and Kareem Hunt (one of the best rushing duos in the NFL), the Browns recorded 184 yards on the ground — a metric sure to make Slaeh cringe, but one that doesn’t reflect Gang Green’s late effort to stuff the running game.

The contest ended when Brissett tossed an interception to safety Ashtyn Davis, who took a knee and secured the Jets win.