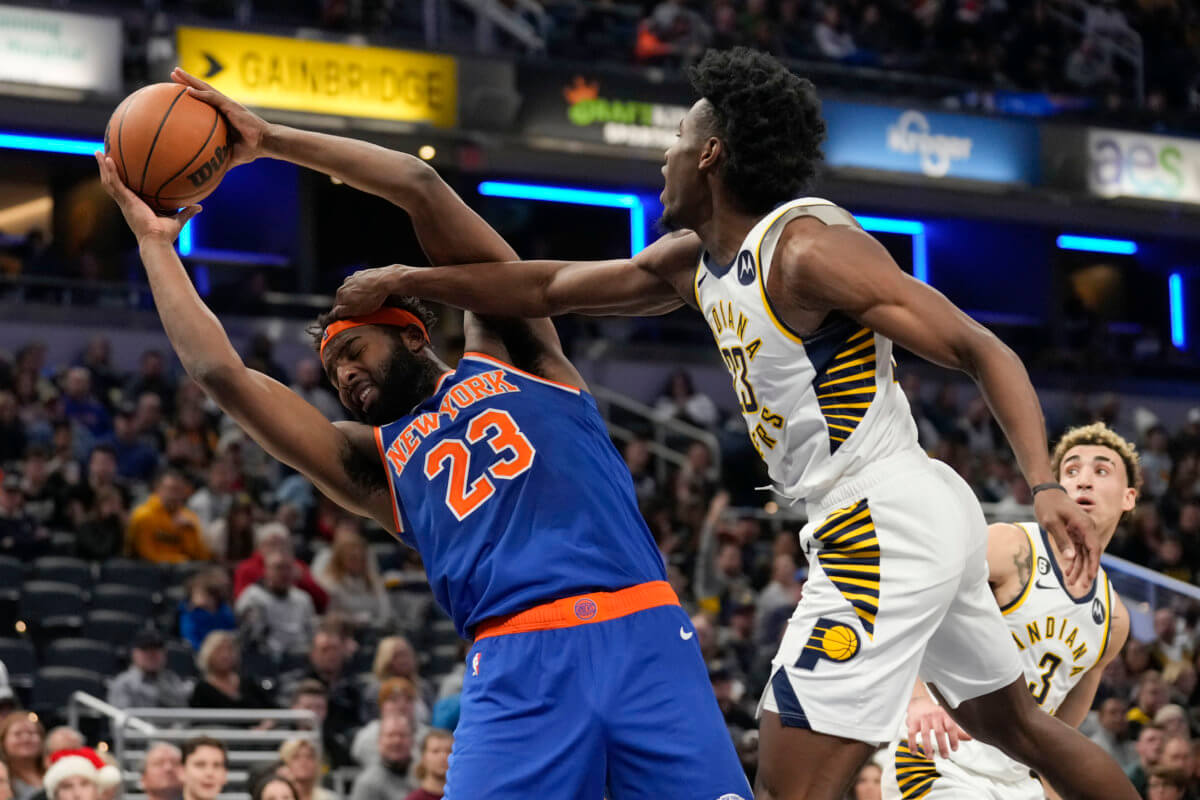 Mitchell Robinson left Wednesday’s Knicks game against the Wizards with a thumb injury and did not return. While the injury was initially called a sprain, it turns out that Robinson sustained a fracture that required surgery and will cause him to miss at least three weeks.

Mitchell Robinson underwent successful surgery today to repair his fractured right thumb at the Hospital for Special Surgery. He will be re-evaluated in three weeks.

Robinson didn’t come out of the game immediately which caused some optimism that he had avoided a serious injury, but the revelation that it was a fracture on his shooting hand quickly vanquished those hopes.

While it’s possible that Robinson could return in three weeks when the team said he will be re-evaluated, it’s more likely that he misses at least a month as he recovers from this injury. While that’s just speculation at this point, what we do know is that losing Robinson is a big blow for the Knicks’ defense.

More importantly, the entire Knicks defense takes a massive step back (minus Immanuel Quickley) when Mitchell Robinson is off the floor.

The Knicks may be in for a rough stretch if Mitchell Robinson misses extended time.

Immanuel Quickley is the only mainstay in NYK’s rotation that hasn’t seen his ratings dip on both ends of the court with Robinson off the floor.

Can the Knicks’ defense hold it together? pic.twitter.com/XZ9kdzBeyX

In his absence, Jericho Sims was inserted back into the rotation for the first time since Obi Toppin returned. In 21 minutes against the Wizards, Sims totaled four rebounds, two assists, and two blocks but he also fouled out, which is one of the bigger impediments to him seeing a larger share of minutes.

His athleticism and perimeter defense make him potentially a better fit for extra minutes than Isaiah Hartenstein, but Thibodeau has continued to keep Hartenstein in the rotation, giving him 13 minutes last night where he had four points and four rebounds.

If Mitchell Robinson returns along his suggested timeline, he will miss 14 games. The bigger issue for New York is that, of those 14 games, all but one (against Orlando) is against teams currently fighting for a playoff or play-in spot. That puts New York in a tough position to stay afloat during that stretch without their best rim protector.

Thibodeau has also historically refused to use small ball lineups, which means one of Sims and Hartenstein will likely be on the floor most of the time. That hasn’t been a recipe for success this season since the Randle/Hartenstein frontcourt is -6.7 in 941 possessions with, scoring 115.3 points, and allowing 122.

Even if New York did decide to go small, they don’t really have the personnel to do it.

Julius Randle and Obi Toppin could conceivably play at the same time as a small-ball four and five, but neither is a particularly strong interior defender and would be vulnerable against versatile offensive forwards like Pascal Siakam. If the Knicks use Randle as a small-ball center and keep Toppin on the bench, the only other option at power forward would be RJ Barrett since Thibodeau refuses to play Cam Reddish.

Throughout his career, Thibodeau hasn’t been known for his creative use of rotations, but he’ll need to learn on the fly with Mitchell Robinson out if the Knicks have any hope of remaining out of the play-in games in the NBA Playoffs.