Bloody night in Brooklyn: Seven shot, one stabbed in overnight outburst of violence 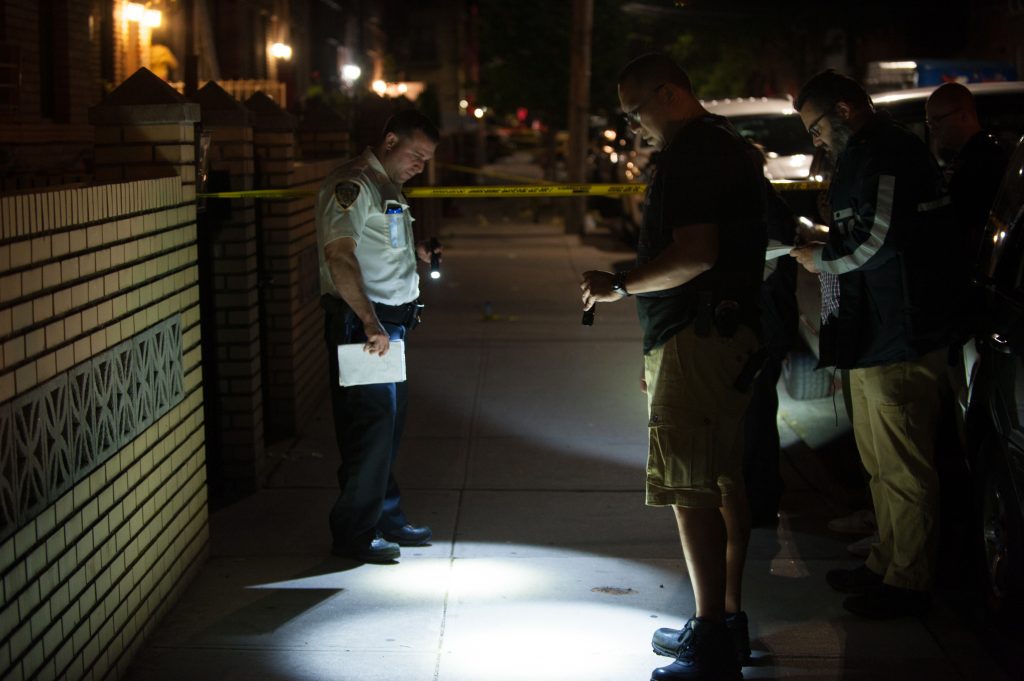 Cops from the 73 Precinct investigate a quadruple shooting at 512 Bristol Street. (Photo by Lloyd Mitchell)

Bullets flew all over Brooklyn Monday night as seven people were shot in three separate incidents across the borough, police reported.

If that wasn’t bad enough, the violent overnight in Brooklyn saw a man stabbed during an apparent robbery attempt.

Cops said one shooting incident, in Brownsville, left a 23-year-old woman fighting for her life after she was shot in the face along with three others after several men began firing into a crowd.

Gunfire erupted just after 10:40 p.m. on June 8 along Bristol Street between Newport Street and Lott Avenue. Police say three to four men began shooting into the crowd, hitting four people in total, including the woman shot in the face.

Paramedics rushed the injured woman to Brookdale University Medical Center in critical condition. The three other victims — a 17-year-old shot in the groin, a 50-year-old who took a bullet to the left leg, and a 35-year-old man shot in the buttocks — are all in stable condition at various local hospitals.

Officers from the 73rd Precinct were holding one man for questioning after the shooting. Cops nabbed him after a foot pursuit in the area of New Lots and Alabama Avenues. Charges have yet to be filed, police reported.

James Green, a resident of the community, was angry that activists are ignoring the street violence.

“Black Lives Matter needs to come protest this senseless gun violence. We are killing ourselves, not a peep out of them. They’ll go to the nice neighborhood and protest in a heartbeat though,” Green said.

Chaplain Roland Barnes was upset that even as the communities are protesting against police brutality, there is continuing violence and “we can’t get out of our own way – why must we keep hurting each other?”

Barnes, affiliated with the Clearview Ministry, an outreach group to Brownsville youth, was shocked by what he saw. He said young people he spoke with at the scene said the shooting was related to the feud between Bloods and Crypts gang.

“I want to see the community come together, I lived over here a long time,” Barnes said.  “There were seven shootings in 30 minutes — that’s ridiculous. Here we are, protesting against police brutality, and yes, we are still killing each other. My greatest concern is speaking to and reaching out to the younger generation and educate them, give them courage,  and tell them this is not the way.”

A second shooting incident took place at about 10 p.m. along Bainbridge Street near Utica Avenue in Bedford-Stuyvesant. There, cops said, a 27-year-old man was shot in the left leg, and a 34-year-old shot in the right leg.

Law enforcement agents believe they were involved in a dispute with another group of males when shots rang out.

Both victims were rushed to Kings County Hospital and reported in stable condition, officials said.

Later, a 35-year-old man was shot in the back in an apparent drive-by shooting in front of 1210 Flatbush Ave., near Ditmas Avenue, in Flatbush. Police reported that the shots apparently came from several men inside a black SUV.

There were also two incidents of shots fired: One occurred at 11:46 p.m. at 1672 Ralph Ave. in Canarsie, where several car windows were blown out. The other took place at 246 Madison St. in Bedford-Stuyvesant, where cops found spent shells and pursued a suspect before losing him in a nearby housing project.

In an unrelated incident, at about 2 a.m. on June 9, a 36-year-old man returning home from an evening of work, was attacked by two men who demanded money at the corner of East 36th Street and Avenue K in the Flatlands section of Brooklyn.

When he refused to surrender property, police say, he was stabbed in the leg and stomach.

He was reported in stable condition at Kings County Hospital.

Anyone within information about the violent incidents can call Crime Stoppers at 800-577-TIPS (for Spanish, dial 888-57-PISTA). You can also submit tips online at nypdcrimestoppers.com, or on Twitter @NYPDTips. All calls and messages are kept confidential.

With additional reporting by Lloyd Mitchell.