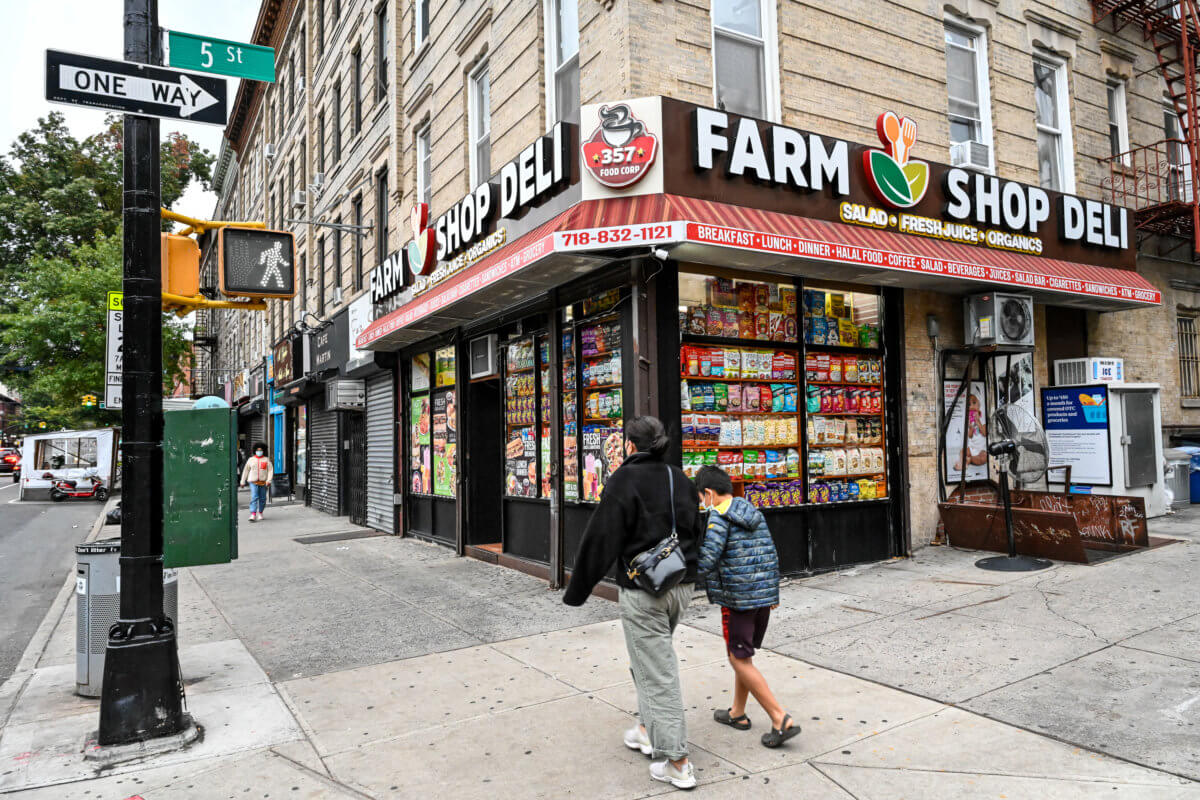 New York City bodega associations are asking the city for help — and for regulations for an up-and-coming industry threat.

Francisco Marte, founder of the Bodega and Small Business Group, and Radhamés Rodríguez, president of United Bodegas of America, are calling for financial help for bodegas across the city, and raising a red flag for a new delivery businesses they say may pose an existential threat to their livelihoods.

“These startup companies offering 10-20 minute grocery delivery will compete directly with our family-run bodegas,” Rodríguez said in a release. “If we don’t take action, thousands of our businesses will close their doors in the next six months, creating additional food deserts and harming New Yorkers’ access to food.”

Those startups are app-based grocery delivery services like JOKR, Gorillas, and Buyk, who offer a full range of supermarket goods delivered to your door in minutes. With prices comparable or lower to what’s found in brick-and-mortar stores, no minimum purchase, and low or nonexistent delivery fees, the apps give customers the opportunity to get their hands on one or two forgotten items — or a whole week’s worth of food — with just a few taps.

Some bodega owners worry that the apps, most of which launched in New York City this year, are encroaching on a niche previously filled only by the neighborhood corner store.

Bodegas – found on almost every block carrying everything from basics like dish soap and eggs to deli sandwiches and beer – have received no help during the pandemic, Marte said, and have struggled even as the city has come back to life.

Marte and Rodríguez are asking the city — and the incoming Adams administration — to invest in bodegas with “targeted public policy programs,” including helping to develop technology that bodegas can use to stay competitive.

“Some kind of support to show apps that can be directed to use the bodegas,” Marte told amNY. “Bodegas are not too savvy with this technology. We’ve already been working with one, but they don’t have the resources or the funding to compete.”

My Bodega Online, which launched last year, currently works with a small number of bodegas in the Bronx, providing a platform for online ordering and delivery.

Jose Bello, the app’s founder, told amNY last month that adapting to the rapidly-changing tech landscape is critical for bodegas, and said acting quickly is imperative for bodegas as quick-commerce delivery apps continue to grow.

“This half a billion dollar industry was created in the last 18 months,” he said. “By the time that people realize the effect that they may or may not have —maybe either they burst as a bubble, or they take over everything — it’s too late, they are here.”

“It would be great if the new administration could help to create some technologies that help the bodegas against those dark store corporations,” Marte said. “Everything is turning to more technologies, we cannot be left behind.”

They should also consider the lack of help bodegas received during the pandemic, he said, even as they stayed open to provide their communities with food and other essentials.

Wealthy, trendier neighborhoods like Downtown Brooklyn, Williamsburg, and lower Manhattan have been the launching sites for quick-commerce grocery delivery apps, who are seeking an audience in affluent young families and professionals.

The companies purchase their stock – which is usually comprised of about 2,000 individual items – wholesale from retailers and operate via “dark stores,” small warehouses with a delivery radius of about a mile. With billions of dollars in financing from venture capitalists and a wealth of available real estate, expansion has been quick and easy for most of the apps – and some, like Buyk – are growing outside of their Brooklyn and Manhattan incubators, launching in the Bronx and parts of Queens.

Marte and Rodriguez are also asking the city to take a look at the zoning regulations in the neighborhoods where these dark stores are opening “to prevent unregulated micro-fulfillment hubs in residential zones and commercial zones,” and urging them to require quick-commerce apps to offer EBT services to their customers online.

“We have already been talking to the Manhattan Borough President, Ms. Gale [Brewer]” Marte said. “She’s interested in helping and taking a look at the dark stores to see where they are open, where they are operating, what licensing they are using.”

Brewer will be returning to the city council representing part of Manhattan’s Upper West Side next year, and he’s hopeful that she will continue to champion the cause there, especially if her bid for speaker is successful.

They have had some conversations with some other local elected officials, he said, but plans are on hold until the city government changes over in January.

“I just want to keep fighting against them,” he said. “These corporations have billions of dollars to promote themselves. In the beginning, some of them, they can take a loss and they can compete with us. They know that they just want to establish a business, and they don’t give any support to the community.”

Bodegas are a longtime staple of New York City neighborhoods, he said, and usually owned and operated by immigrant families and employing people from the community.

“You see any problems happening, people, where do they run? To the closest bodega that is open for protection,” he said. “If you don’t have money and you need something to eat, where do you go? To the bodega, to ask them to give you something until they can pay.”

He urged politicians to step up to help bodegas before things get too dire.

Read more about grocery delivery apps in our recently-concluded The Race to Deliver series.