Cineworld <CINE.L>, the world’s second-biggest cinema chain, will close its UK and U.S. movie theatres this week, leaving as many as 45,000 workers unemployed, as it fights a coronavirus-related collapse in film releases and cinema-going.

The company said the reluctance of studios to go ahead with major releases such as the new James Bond film had left it no choice but to close all 536 Regal theatres in the U.S. and its 127 Cineworld and Picturehouse theatres in the UK from Oct. 8.

New York is home to 44 Regal Cinemas locations with multiple New York City locations, including two in Brooklyn, three in Queens, three in Manhattan and two on Staten Island. The theaters have been closed since the start of the pandemic, like many other movie theater companies. Governor Cuomo has issued guidelines to allow the reopening of schools, restaurants, gyms and casinos, however many theaters still remain in the dark.

Cineworld Chief Executive Mooky Greidinger told Sky News that the operations might resume in “two months, or a bit longer”. Movies including the superhero sequel “Wonder Woman 1984” are slated for a Christmas Day release.

“From a liquidity point of view, we were bleeding much bigger amounts when we are open than when we were closed,” Greidinger said.

Cineworld’s statement on Monday, confirming leaks over the weekend, spelt out the scale of job losses from its move, which affects thousands of ancillary staff including cleaners and security as well as its own employees.

Shares fell as much as 60% to an all-time low within ten minutes of the opening bell on Monday as the group, which is carrying heavy debt due in part to its acquisition of Regal in 2018, said it was looking at all ways of raising additional funds.

Cineworld’s statement follows a grim evaluation by ratings agency S&P on Friday of rival AMC Entertainment <AMC.N>, owner of the Odeon chain, which said the U.S.-based group may run out of liquidity in six months unless it can raise more capital.

The entertainment industry has been among the heaviest hit by social distancing and other restrictions, with Walt Disney <DIS.N> last week announcing plans to lay off roughly 28,000 employees, mostly at its U.S. theme parks.

Cineworld began reopening in July after virus-related restrictions started to ease, but the further postponement of the James Bond film “No Time To Die” and others including Marvel’s “Black Widow” have left the months ahead looking bleak.

“Without these new releases, Cineworld cannot provide customers in both the U.S. and the UK… with the breadth of strong commercial films necessary for them to consider coming back to theatres,” it said.

While some cinemas in China, the world’s second largest movie market, have reopened with strong audiences, there is a lack of major movies to watch on the big screen.

Studios have chosen to release some of this year’s major planned blockbusters on Netflix or the Disney Plus streaming platform, and have cancelled others until 2021.

The boss of rival chain Vue cinemas Tim Richards told BBC Radio: “Our problem right now is we have no movies, and this was a big blow for us.”

“We are likely going to make it through. I’m concerned about the independents and the small regional operators right now that are going to really struggle, and when they close, they may not reopen.”

Britain has slid into a fresh round of lockdowns and tightened social restrictions in the past month.

“Although the delay of the latest 007 blockbuster prompted the decision, Bond isn’t the villain in this piece,” Hargreaves Lansdown analyst Susannah Streeter said.

“The spread of COVID-19 around the world has been a horror movie for the industry and the fresh wave of infections is the latest installment in what’s been a devastating story for cinema chains.” 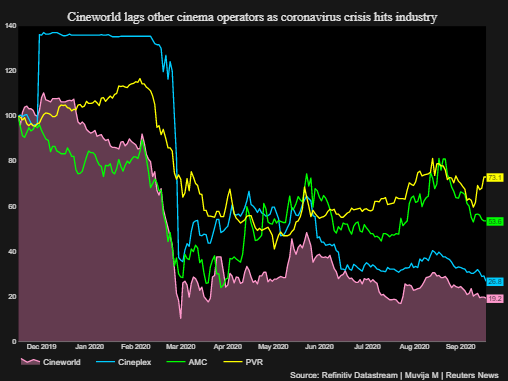