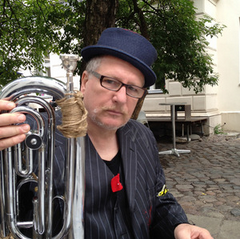 Jim Costanzo is one of the more than 100 people who have been interviewed so far for “Your Village, Your Story: A Greenwich Village Oral History Project.” Photo courtesy New York Public Library

BY HEATHER DUBIN  | Storytellers and interviewers in an ambitious oral history project came together last month at Jefferson Market Library to celebrate their effort to preserve the past.

For five months, volunteers worked to record neighborhood tales from people who have lived, worked or spent more than 20 years in the area for “Your Village, Your Story: A Greenwich Village Oral History Project.” Successfully archived, the stories are now accessible online.

More than 100 people turned out for the April 25 event, which was moved upstairs to a larger room to accommodate the crowd.

Frank Collerius, the Sixth Ave. library’s manager and the project’s creator, said it exceeded his expectations, and will continue. The original goal was to collect 30 stories. They now have 102.

“We’re not stopping this,” he said. “It’s a living thing. It’s the Village. These people are fantastic. They’re not shy about telling their story.”

That evening, Barbara Steinberg surprised Collerius with a story about a hair-straightening mishap at a Village salon years ago before jetting off to Paris. Collerius said Steinberg had starting out by telling him, “I sued the Dorothy Lamour hair studio,” and he knew that was a story they needed to hear.

While Collerius noted that Jefferson Market Library is a special place, and Greenwich Village is legendary, he stressed the real history is the lived experience of neighborhood inhabitants.

“It’s not just about Dylan,” he said, referring to the famous folk singer. “It’s the day-to-day experience of people, in their homes and on the streets.”

Collerius also personally interviewed locals for the project, and recalled great Mafia-related stories from a woman who raised her family on King St. One of the best stories she told him involved Italian housewives who leaned out of their apartment windows onto pillows to survey the neighborhood.

“When they went inside to watch soap operas — that’s when crime happened,” he said. “They weren’t watching.”

The interviews are presented in their entirety and run from as short as 20 minutes to as long as two-and-a-half hours.

The interviews are currently online, and will be available on CDs as part of the research collection at the Jefferson Market Library this summer, and will also remain online.

“People can hear them 100 years from now,” Kelly said.

Storytellers include a former employee of the Pleasure Chest sex shop on Seventh Ave. South, puppeteers responsible for starting the Greenwich Village Halloween Parade and Sharon D’Lugoff, daughter of the late Art D’Lugoff, owner of the Village Gate, the legendary jazz nightclub at Thompson and Bleecker Sts. D’Lugoff described her father as “one of those Village people” who was an active member of the community.

Technology is being developed for this project that will allow users to type in the name of a specific street, time or place and find that exact reference throughout all of the interviews. Additional annotations can also be added to the audio bytes.

Heather Campbell, a 17-year West Village resident, described her experience as an interviewer.

“The hardest thing was getting people to wait,” she said. “You’d walk into people’s apartments and they would start talking as soon as you walked in the door.”

Campbell conducted four interviews and had a favorite moment in each. During Richard Stewart’s interview, she learned about a person who camped on top of the arch in Washington Square Park for six months. In another, someone entrusted her with very personal information.

“I could see from her eyes that she was debating whether or not to share this, to give that gift,” she said.

Campbell enjoyed going through the process.

“It was so incredible to listen to people share their story of the streets I walk down 10 times a day,” she said. “I have so much hope for this project for the library.”

At the evening’s end, community members mingled and reminisced. Sandra Molè lived next door to the Village Gate until her family moved to New Jersey when she was a teenager. Her parents, ages 92 and 93, were both interviewed for the project.

Molè shared her own neighborhood story about the Beatles that has yet to be recorded. She was 12 years old in eighth grade and was walking home from school with two other girls. The Beatles were here for their first performance in America, 50 years ago, for two nights on the Ed Sullivan Show. Molè was not allowed to go.

Instead, she and her friends decided to call the Beatles from a payphone on the corner of Thompson and Bleecker Sts. They had heard George Harrison had a bad cold, and thought they would give it a shot to see if they could reach the Beatles on the telephone at the Plaza Hotel.

“I pretended I was Harrison’s doctor — nobody knows that part — and they just put me through,” she said. “Luck of the draw.”

John Lennon picked up the phone, and informed Molè that Paul McCartney was just getting out of the shower. All three girls spoke with Lennon, Harrison and Ringo Starr.

“John was so fascinated that we were from Greenwich Village,” Molè said. He had heard of the Village Gate, and when Molè said she lived next door, he had lots of questions about the club. “They were very nice,” she added.

Molè remembered her girlfriend, a year older, somberly told the Beatles, “I’d like to personally welcome you to the Village.” “We told her to stop it! And then the youngest, our friend Linda, who has since passed, was crying, ‘I love you.’ We told her to stop it, too,” she said.

The girls kept running into a liquor store close by to get change for the phone. Molè recalled people nearby asking the girls why they were screaming like that.

“No one believed us,” she said. “When it was over, we just sat and cried afterwards — like all the girls did in those days.”

To listen to the interviews or for more information go to  oralhistory.nypl.org.