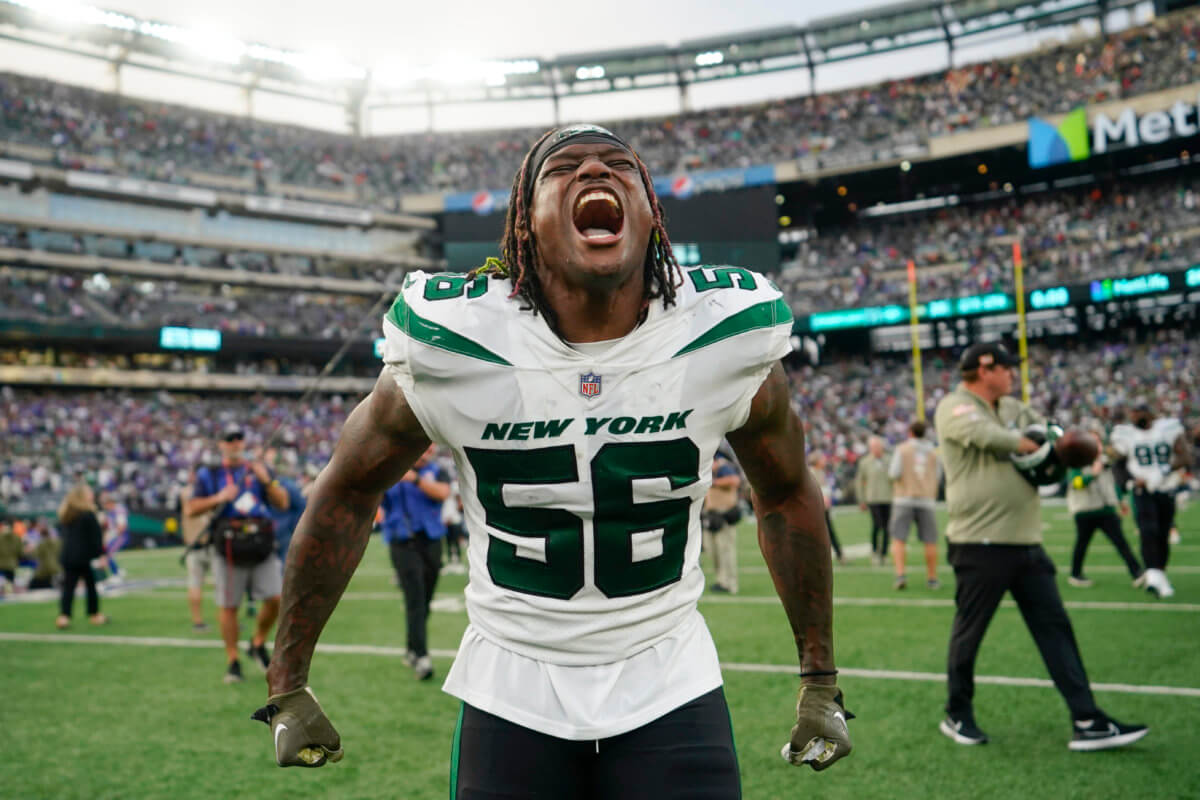 The Jets are heading into their bye week after a terrific 6–3 start to the season, and they’re hoping to build on the success they’ve seen through nine weeks.

Coming off a signature win against the Bills on Sunday, Gang Green is just a half game behind Buffalo for first place in the division, and currently control the first Wild Card spot in the AFC.

Quarterback Zach Wilson played the best game of his NFL career against Buffalo, which showed superb mental toughness after his porous performance a week earlier against the Patriots.

“Of course it feels good,” Wilson said. “What a huge team win.”

Wilson tossed 18 completions on 25 attempts for 154 yards and a touchdown, while adding several clutch first downs with his legs.

“He’s gonna be a good football player. He’s still a pup in this league and he’s got a long way to go, but I thought he did a really nice job today,” head coach Robert Saleh said of his performance against Buffalo.

He’s now averaging just over 200 yards per game, with four touchdown passes on the season after missing the first three weeks with a leg injury.

The receiving core, meanwhile, has been stellar for New York this season, with rookie Garrett Wilson leading the way, followed by Corey Davis, Tyler Conklin and Elijah Moore — comprising one of the deepest pass catching groups in the NFL.

New York’s running game suffered a devastating loss a few weeks ago when Breece Hall tore his ACL, but Michael Carter and newly-acquired James Robinson have stepped up to fill the void, while rushing for a combined 124 yards on Sunday.

On the defensive side of the ball, the Jets have been a true force-to-be-reckoned with.

In the secondary, the team has been led by rookie cornerback Sauce Gardner, who the Jets drafted 4th overall in the 2022 NFL Draft. He ranks first among NFL corners for passing yards allowed (26), passing touchdowns surrendered (0) and first downs allowed (2).

On Sunday, he came up with a clutch interception of MVP-frontrunner Josh Allen, marking his second pick of the season.

The team has allowed just nine passing touchdowns through the first nine games.

The defensive line of the Jets, meanwhile, has been equally stellar, led by defensive tackle Quinnen Williams. He has seven sacks, 33 tackles, 17 quarterback hits, and a forced fumble this year.

Collectively, the Jets have 26 sacks this season (9th-most in the NFL).

New York got some bad news on Monday, when tests revealed that fellow defensive tackle Sheldon Rankins will need to miss at least four weeks due to an elbow injury — though he is slated to be back in time for the playoffs.

Even with the injury, though, the Jets defense is solidly in the top tier of the NFL, and should continue rolling in the weeks to come.

“Even the most optimistic Jets fan wouldn’t have had us at 6–3,” said Robert Saleh.

After the bye week, they will take on the New England Patriots in Foxboro, before hosting the Chicago Bears in Week 12.