Jets O-lineman Mekhi Becton ‘likely’ out for the season 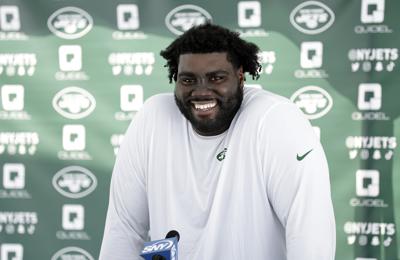 The Jets suffered a major loss, as offensive lineman Mekhi Becton is likely out for the year with a knee injury, according to head coach Robert Saleh.

“These are young men. And sometimes, with social media, we dehumanize these athletes in the worst way imaginable,” the coach said. “Mekhi has walked in this building, and taken every single punch you can get from every which way.”

“He shows up and works his tail off, and he grinds every day. He’s fighting to get himself back in shape.”

Becton limped off the field at practice on Monday with an avulsion fracture of the right knee cap, and the coach said that the team was “sick” to learn of the 23-year-old’s injury.

“[We’re] still waiting on all the second opinions he’s gotta get, but obviously it’s not looking good for the initial prognosis,” said Saleh.

“Since minicamp he’s been working his tail off, for this new injury to happen it makes everybody in the entire organization sick for him because we know how hard he’s been going at it since minicamp.”

The offensive lineman was picked by the Jets as the 11th overall selection in the 1st round of the 2020 NFL Draft, coming out of the University of Louisville, and was slated to start at right tackle.

Becton figured to be a large part of the Jets’ offense this season, as sophomore quarterback Zach Wilson and rookie running back Breece Hall look to improve on the team’s lackluster 4–13 season last year.

The team has reportedly targeted Duane Brown to replace Becton, if his injury is as serious as it appeared.

Jets general manager Joe Douglas said on Monday that the “wheels are in motion” to sign the free agent, which would add a now-much-needed lineman to the Gang Green offense.

Brown is a veteran of the NFL, after joining the league as a 1st-round pick by the Houston Texans in 2008.