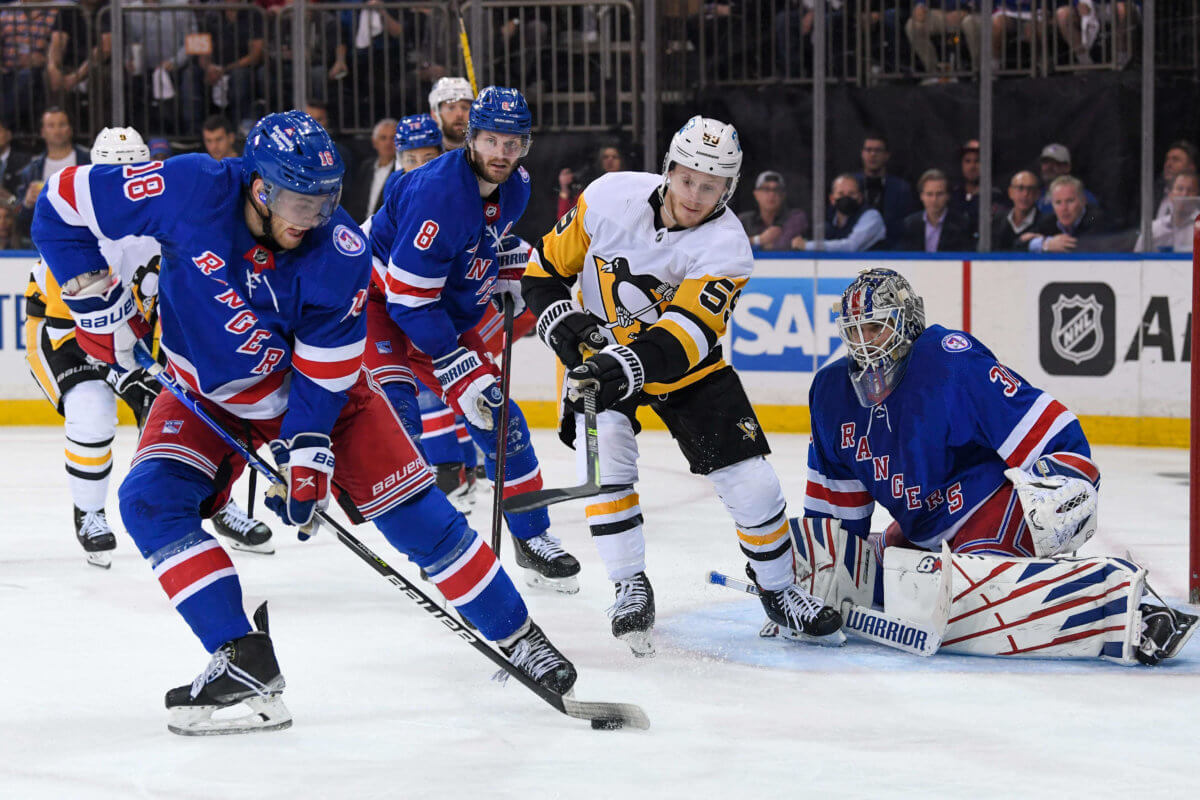 Rangers center Andrew Copp attempts to clear the puck out in front of the net.
Dennis Schneidler-USA TODAY Sports

The Rangers beat the Penguins on Wednesday night to force Game 6 of the opening playoff series in Pittsburgh on Friday, when they’ll look to even the series at 3–3.

After a pair of less-than-stellar performances in Game 3 and 4, when the Blue Shirts gave up 7 goals in both games and head coach Gerard Gallant yanked All Star goalie Igor Shesterkin twice, the team bounced-back with a nail-biting win at Madison Square Garden to send the series back to Pittsburgh.

Shesterkin, who is the likely Vezina Trophy winner, and is also a finalist for the Hart Trophy as well, will again start in the net for the win-or-go-home game on Friday.

Meanwhile, the Penguins offense suffered a devastating blow when their star, Sydney Crosby, one of the best offensive players in the NHL, exited the game with an apparent head injury after sustaining a hard hit from Jacob Trouba. He will be evaluated and his status for the contest remains unclear.

So, as the two teams travel to Pennsylvania’s PPG Paints Arena for Game 6, here’s what sports bettors need to know:

Tale of the Tape (regular season):

The Rangers will get over their early-postseason jitters and force Game 7.

Entering the game as slight favorites, there remains an open question about which team will show up: The dominant squad that won 52 games this year, or the lackluster club that surrendered 14 goals in 2 games earlier in the series.

Game 5 marked a bounce-back to their regular season showing, and that trend should continue with their backs once-more against the wall.

While the franchise did have a run to the Stanley Cup finals in 2014, when they lost to the Kings, only one player from that team remains on the squad this season: Chris Kreider. Other than him, much of the roster is comprised of players that have limited-to-no playoff experience, which could work to explain their disappointing play to begin the postseason.

Now, with 5 games under their belts, they should be better suited to overcome any nervousness, and get back to playing like a coherent, winning team.

The X-factor in the series will be Crosby. If he’s unable to play, or he is not 100% healthy, that would be a major boost for the Rangers defense. But the team has been tight-lipped about their star, so, barring any further updates prior to the puck drop, bettors will be somewhat in the dark about Crosby’s potential for the game.

Either way, the Rangers, who are slight favorites in the game, should be in a good position to extend the series.