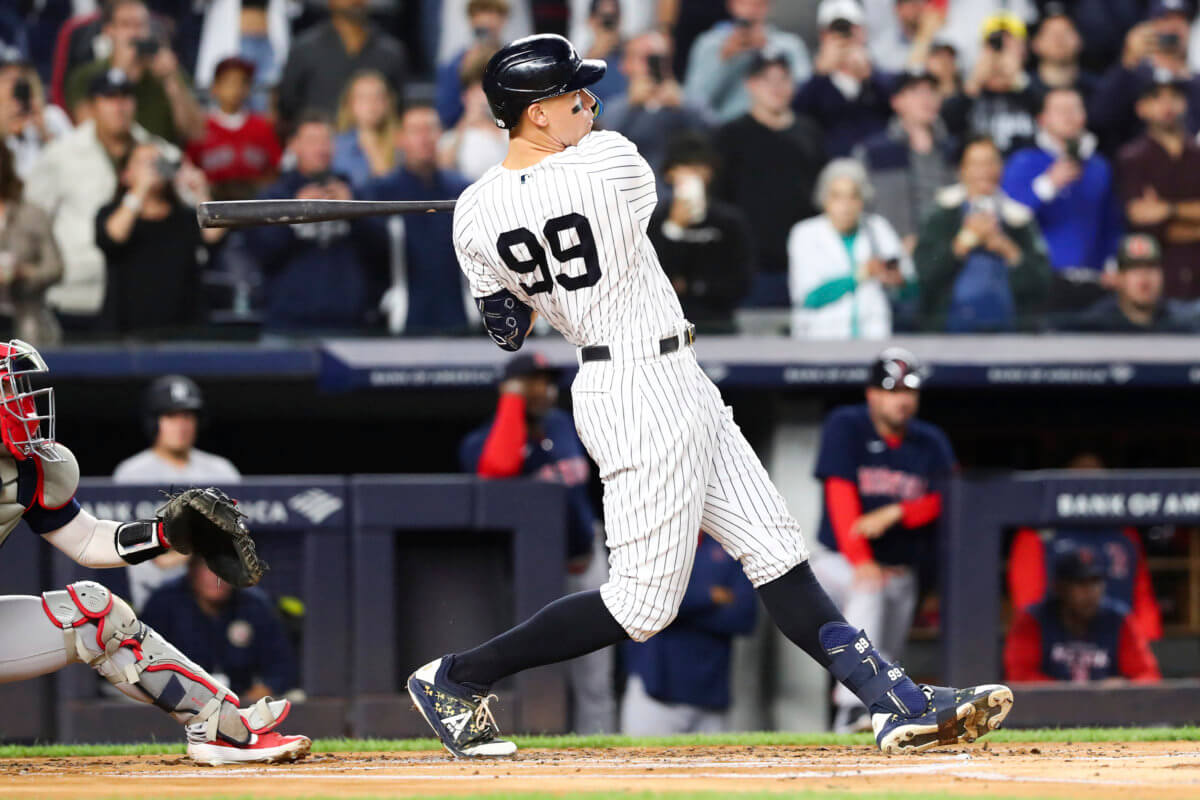 Another year has come and gone on the New York sports scene and it certainly was a memorable one created by the athletes that wear the city’s (and state’s) laundry.

The Bronx housed an American League MVP and home-run-record setter. Queens saw one of the most dominant seasons ever put together by a reliever. In Manhattan, a goalie won the NHL’s most prestigious award for a player at his position.

For the first time ever, the sports staff at amNewYork voted to rank the top 22 athletes in the area over the last calendar year, from Jan. 1, 2022, to Dec. 31, 2022. A first-place vote garnered 30 points, a second-place vote was worth 25, and a third-place vote was worth 20. Each vote ranking fourth through 22nd decreased by one from 19 to 1. Half points were administered upon tie-breaking votes among the staff.

Here are the results:

The Yankees slugger had a season for the ages in 2022, breaking Roger Maris’ American League home run record with 62 round-trippers to go with a 1.111 OPS, which led baseball. He was a no-brainer for the AL MVP, paving the way for a handsome payday in free agency.

You’d be hard-pressed to find a more dominant season by a reliever in baseball history. The Mets’ closer posted a 1.31 ERA with 32 saves, but what puts him so high on this list is that he struck out more than half of the batters he faced in 2022, fanning 118 of 235.

He put the finishing touches on a Vezina Trophy-winning 2021-22 season in which he posted a .935 save percentage and 2.07 goals against average by anchoring the Rangers to the Eastern Conference Finals. This year, he’s led all NHL goalies in minutes played.

After leading the Bills to another division title, Allen has continued to star under center in Buffalo. Entering Week 16, he’s 11-3 with 3,857 passing yards with an additional 705 on the ground to go with 36 total touchdowns and 11 interceptions.

The slugging first baseman became the first player in Mets history to record two seasons with at least 40 home runs in 2022 as he continues his route to shattering all franchise home run records. He’s also become one of the premier power hitters in the National League. Having played just four seasons, he already ranks seventh in franchise history with 146 round-trippers. His 131 RBI alongside those 40 dingers also led the National League in 2022.

Durant continues to be the face of the Nets and one of the NBA’s very best, averaging 30.4 points per game this season. Not only has he weathered the storm of uncertainty in Brooklyn, be it the Kyrie Irving drama or Steve Nash firing, but he’s also helped stabilize the franchise in recent weeks.

A clear favorite to win the NFL’s comeback player of the year award, Barkley has fully recovered from injury issues and has returned to his superstar self in the Giants backfield. After rushing for just 593 yards and two touchdowns in 13 games last year, Barkley has 1,170 yards on the ground with nine scores for Big Blue this season.

The second season of Lindor’s massive contract was a vital one. He finished top-10 in NL MVP voting after batting .270 with 26 home runs and a franchise-record-for-a-shortstop 107 RBI.

A core issue hampered the veteran’s production down the stretch, but Scherzer mostly lived up to his billing after signing with the Mets ahead of the 2022 season. He went 11-4 with a 2.29 ERA and 173 strikeouts in 145.1 innings pitched.

Gardner has been a revelation for a Jets secondary that was in desperate need of legitimate talent. The runaway favorite for the NFL Defensive Rookie of the Year award, Gardner has two interceptions and a league-leading 16 passes defended to go with 58 tackles.

Diggs continues to build his perch in Buffalo as one of the best wide receivers in the NFL. He is already on the verge of exceeding last season’s output in fewer games, entering Week 16 with 99 receptions for 1,299 yards and 10 touchdowns.

Ionescu continues to put the Liberty back on the WNBA map after a brilliant third season in the pros. While she averaged 17.4 points per game in 2022, she tied a league record with three triple-doubles, including being the first player in league history with a 30-point triple-double when she dropped 31 points, 13 rebounds, and 10 assists against the Las Vegas Aces in July.

Kreider scored 33 of his monster 52-goal season from Jan. 2-April 29 to help lift the Rangers to an unlikely postseason run. He’s added 16 goals in 34 games this season as of Dec. 21.

This is what the Jets were expecting when they drafted Williams third overall in 2019. The Alabama product has been one of the best interior defensive linemen in the NFL this season, posting 11.0 sacks with 47 tackles — 12 of them coming for a loss.

With a remarkable turnaround from an anomaly that was 2021, McNeil reclaimed his place amongst the very best natural hitters in the majors in 2022. “Squirrel” won a batting title with a .326 average with a career-high 148 hits and 39 doubles.

Another remarkable Jets rookie, Wilson has overcome uncertainty at the quarterback position to show the franchise that he is a big-play threat on the outside to build on. Through 14 games, he posted 67 receptions for 966 yards and four touchdowns.

While at times overshadowed by Shesterkin, Sorokin might be the more consistent of the two star New York goalies. Over the last two seasons, he owns a .925 save percentage and 2.39 goals against average. He currently leads the NHL with three shutouts this year.

Zibanejad is performing better than a point-per-game pace this season with 37 points over his first 34 games of the season as an invaluable veteran leader of the Blueshirts.

Put all the drama and whacky theories aside, Kyrie Irving is still one of the top point guards in the NBA. He’s averaging 26.1 points and 4.5 assists per game this season.

While he was the scapegoat of the Knicks’ down season last year, Randle has rebounded nicely to start the 2022-23 campaign, averaging 22.3 points and 9.2 rebounds per game.

This was a monumental season for Jones to show that he can hang in the NFL as the starting quarterback of the Giants — and he’s answered the call. He’s 8-5-1 this season while developing into one of the top dual-threat quarterbacks in the league. He’s passed for 2,694 yards with 12 touchdowns and four interceptions while running for an additional 583 yards and five scores.

For more like the best New York athletes of 2022, visit AMNY.com